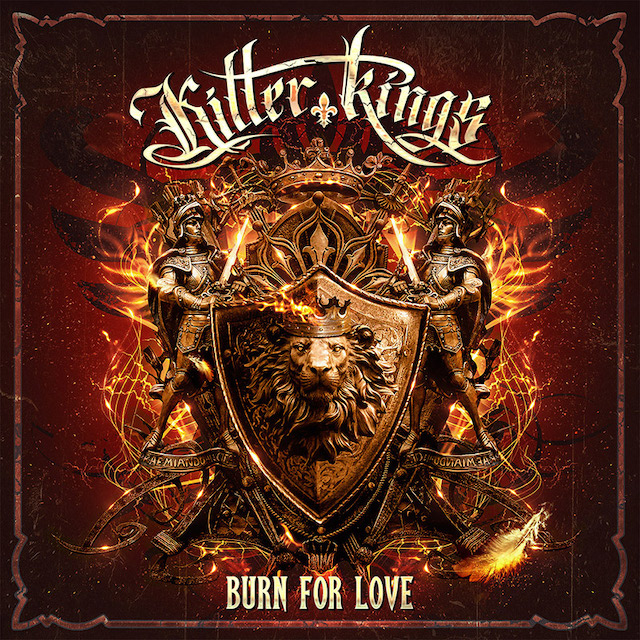 Red Dawn was the brainchild of keyboard player David Rosenthal and his former Rainbow band mates Chuck Burgi and Greg Smith, recruiting Tristan Avakian for guitar duties. His sound in conjunction with Rosenthal’s swirls established the band’s debut, going down into rock history as a must have for fans. Avakian established himself in music’s widest variety being involved with artists from Biohazard to Mariah Carey, and productions as varied as Cirque du Soleil and Trans-Siberian Orchestra.

Well, what if I told you that those 2 forces united and founded this band; Killer Kings?

Off the bat a song like ,,Burn for Love” makes clear that there’s a lot to enjoy in Killer Kings. Avakian lays down some amazing melodies and riffs that fuse well with the song’s powerful rocking structure. Keys are stabbing, subdued to the prominent guitars and drums, adding to the song’s color. Lynn Hall growls loudly and displays a heavier sound than ever before. Almost anger-laden, with rough ‘round the edges blues raffle, he matches the rawness of turmoil. Gregory even accumulates in Coverdale-ish vocal tone towards the breakdown, creating subtlety in a hard rocking environment. The song perfectly sets the tone for this tremendously driven album, rocking forward with great drive.

Checking in with Red Dawn in terms of melody while banging out in bluesy timbre and tone the album progresses. Power rocker ,,I Will Be Stronger” with Whitesnake’s Joel Hoekstra guesting delivering a Jeff Watson -like solo, the song nests immediately, and ,,Phoenix” pulls forward with breaks and short guitar salvos with the song evolving much like Places of Power’s best songs.

Vocally Lynn Hall now draws from a wonderful warm register that borders with Larry King’s (Soleil Moon, MTB) finest, frequently touching base with their sound. A distinct sound the band delves also on the equally wonderful ,,Two Ships”, uniting the best of melodic rock and AOR as summarization of the decades.

Gregory belts an insane vocal job, touching deep. Welling with emotional accolades ,,Losing Me” also follows the path, but powers up in lush harmonies and soars with a wonderful solo, swirling in fretboard magic with tremendous gain and piercing notes in fluent harmony.

,,Higher” is fusing 101 South’s subtlety with Red Dawn’s impeccable melodics, swirling with 80s grandiosity. Cliché chorus, compensated by the stellar guitarwork and towering shred solo from Avakian, the song is loaded with hooks. This applies specifically to the amazing “In a Different World” with its lush keyboards and soaring hoarse vocals. Gradually building, the track is sheer melodic delight, with Avakian tastefully throwing around licks, melodies and solos. More soaring is the delivery of the ominous paced ,,Another Night, Another Fight”, glooming forward to delve into a glorious chorus with towering musical marksmanship exposed, and the guitar driven ,,Do Or Die” with its sudden smothered lush sections and memorable chorus. In all this musical might, Hall holds up firmly belting versatile vocal deliveries with well dosed drama and melancholy, like on the smooth ,,The Pains of Yesterday” that grows on you with every spin.

Topping off the album in style Killer Kings dives in the melodic waves of ,,Ain’t No End In sight”, that floods with emotion and great interplay. Subtle guitar picking and delivery of wonderful licks that morph alongside the song’s well-crafted mellow structure, oozing comfort. Tristan frequently seeks the spotlight with his swirling short solos towards the song’s wonderful ebbing breakdown.

`Burn For Love’ is an album that fuses the finest of melodies with the best guitar licks and hooks in the field. Tristan Avakian displays his creativity and dazzling talents on the guitar, as well as his craftmanship as a composer. He brings in the right tone and atmosphere to thrive on. Gregory Lynn Hall displays his vocal range like never before and delivers constantly, injecting the songs with the needed soar and bluesy notes. Together they emphasize each other’s skills and talents and boost the album forward. Killer Kings summarizes the last three decades in 11 top shelf songs, with never a dull moment. Like Mike Slamer utilized his creative force in Steelhouse Lane and Streets, Killer Kings is the epiphany of Lynn Hall and Avakian bond.