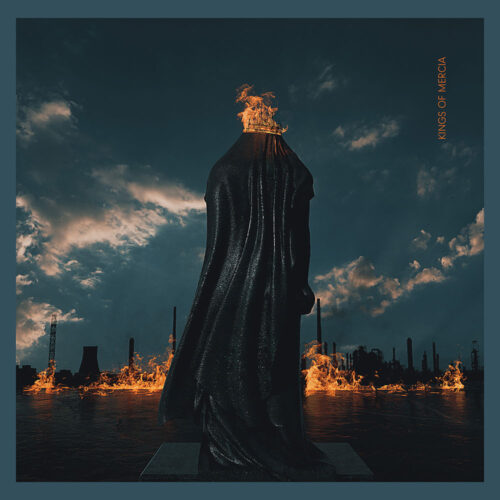 Fates Warning seems to be put in the fridge for the time being but that did not mean that the band members were not active. Singer Ray Alder and drummer Mark Zonder launched the excellent band A-Z. Guitarist and band founder Jim Matheos and bass player Joey Vera got things underway in a new project Kings Of Mercia. Recruiting star drummer Simon Phillips (Toto and Derek Sherinian amongst many others) and nobody less than FM and Lonerider vocalist Steve Overland.

When you look at the past of these four seasoned musicians you might even think of the term super group. I mean, all of them have tonnes of experience and have been active for some four decades. It all started with Jim Matheos who started writing material. Stuff that had not much to do with the progressive rock and metal style that Fates Warning became famous with. He wanted something a bit different and as soon as Steve Overland came onboard (apparently rock journalist Dave Ling introduced them to each other) and co-wrote the songs with Matheos things started to fall into shape. Steve recorded his vocals in the UK while the others musicians recorded their parts in America.

If you are a fan of Fates Warning I’m afraid that ‘Kings Of Mercia’ is a different cup of tea. Here are no long and complicated songs to be heard. This album rocks straight forward and is more an eighties minded hard rock album with plenty of melody. For Matheos certainly a different approach but not so much for Vera (thinks of his involvement with Armored Saint), Overland or Phillips. ‘Kings Of Mercia’ kicks melodic ass, is purely guitar orientated and has a bunch of good songs.

Opener ,,Wrecking Ball’’ already shows that this band is in a attacking mood. Also ,,Your Life’’, ,,Is This Right?’’ and ,,Set The World On Fire’’ showcase a band that has its site set on pure and straight ahead hard rock. Add to that a duo of very decent ballads (,,Everyday Angels’’ and ,,Too Far Gone’’), solid performances by Phillips and Vera and there you have it. A project of four guys that fit well together and they bring something that is relevant to the table.

REVIEWS OF KINGS OF MERCIA

While strolling on the Internet I found a few US reviews of this album and it turned out that several of the reviewers never heard of Steve Overland and were not familiar with his career. It amused and baffled me at the same time. Have a look for yourself and at the same time check out some clips of this (one off?) project. It has been out there since September but I am sure glad that I found it. As far as I am concerned Matheos can start writing a sequel.