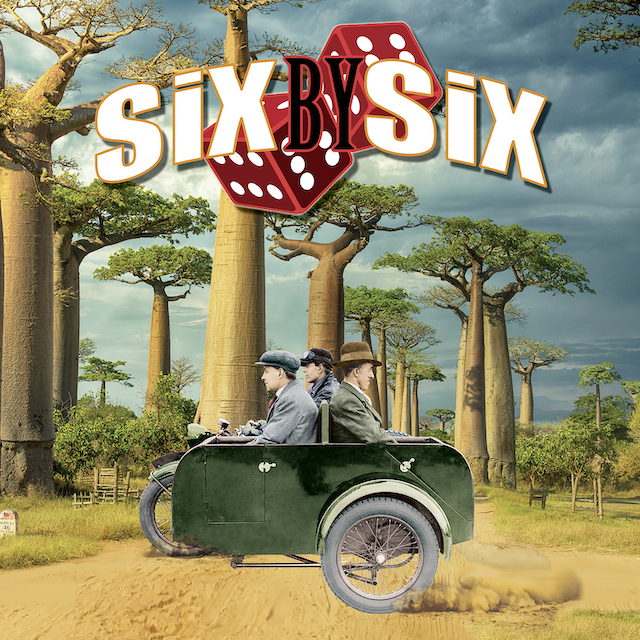 What is the outcome when you unite the forces of two of symphonic rock’s most viable musicians, teaming up with a heavy metal drummer whoms accolades range from avantgarde posh punk to progressive and symphonic rock?

Six By Six is the new band consisting of singer songwriter extraordinaire Robert Berry (Hush, Alliance, 3, etc.), Saga guitar wizard Ian Crichton, and Saxon’s Nigel Glockler who also shared the stage with allumnees such as Toyah, Asia, GTR and Steve Howe. An all-star cast combining their enormous skillset and talents. Anyone up to par with these genres will instantly recognize its potential and Six By Six certainly lives up to those high expectations, as proven on this impeccable debut.

Ever since Greg Lake left E.L.P. in the late eighties, and drummer Carl Palmer the late Keith Emerson started their collaboration with Robert Berry recording 3’s eponymous “To the Power of Three”, and following Alliance releases and solo efforts, I kept an eye out for Berry. His compositions morph from daunting symphonic jam-packed E.L.P structures and sonic explorations, to songs with tremendous drive, memorable hooks and melodies. Pointy and sharp, bombastic to say the least. Gifted with a typical warm voice, he injects devotion and passion in his vocal delivery, assuring profound melodic engagement.

Grandiose is the opening of ,,Yearning to Fly” with its stride and pompous power. Pulled forward by low throbbing bass and Ian’s reflective explorative riff and melody nuances. Injected with an organic feel over its plucking light ambiance toward the pompous chorus, unifying Saga’s striking guitars and vocal hooks, with jazzy dynamics and fusion action of Berry and Emerson’ striking 3 and 3.1. Berry’s narrative part in the middle is subtle, before increasing its allure with ploughing hard bass and light clean guitar interaction, backboned by wonderful and colorful drum patterns. Resourceful and poignant in drama.

Less dramatic in its musical execution is forceful riff driven ,,China” with its criticizing lyrical content adding to the poisoning density. Short, pointy, and powerful. Robert delves from the melodic prog pomp and AOR allure of Alliance and 3 dominantly. It fuses perfectly with Crichton’s colorful guitarwork and Glockler’s dynamic drumming. Bass lines are in the front end unloading its throbbing drive, with keyboards and synthesizers pumping up the towering density. There’s an internal intensity injected in every song, fusing words and hooks, melodies and musical marksmanship. ,,The Upside of Down” is tremendously driven, with Nigel adding spitting drive while brass arrangements and pumping keys are eluding. Proggy breaks and polyrhythmic drumming and odd time signatures cast insane uproar while Crichton reverbs to his debuting Saga power shreds and riffage.

Ian is a perfect fit to Berry’s insane bass and keyboard driven songwriting. Rocking out on sparkling melodic ,,The Last Words on Earth”, they switch to jazz-fusion regularly, like on the wonderful welling ,,Casino”. The dynamics in delivery of both is exceptional with Nigel matching their musical grandeur. The dizzying progressive opening of ,,Skyfall” opens with impressive force, more condensed with staccato keyboards ousted and guitar licks against the grain, it unravels in progressive orbit.

AN INSANE ROCKER WITH MELODIC GRANDEUR

Pompous it rolls forward with impressive melodies interchanging its solidity sections with lusher orchestration. Again, the dynamics are spectacular and majestic. ,,Save The Night” also barges in with a commanding riff and demanding vocals over more progressive structures. Like on ,,Skyfall” it is pulled by insane powerful bass lines and harmonious vocals and melodies, enhancing the tracks grandeur. It also features fine guitar sections with Crichton delivering his best work in years. Versatile, eloquent and vivid in style and tone, Ian lays down impressive groundworks for the song. Fused to powerful hard rocking drums switching jazzy, its eluding vocals over striking warm melodies, the song is an insane rocker with melodic grandeur. Colorful scenery is pasted and the sonic soundscape is deepened with the reoccurrence of a soulful chorus with towering pretention at the end.

,,Live Forever” is an acoustic short tune with subtle guitar plucking and warm vocals that ooze confidence and frailty, underlined by an even warmer layered chorus. Comparable is the opening of ,,Battle Of A Lifetime”, that is powerful meandering. Acoustic sections and pomp rock elements are fused into a dynamic mid paced track scattering with hope shattered, and glorious reconciliation of one’s dreams. Lyrical content is perfectly matched musically.

Musically Six by Six blends melodic AOR/pomp rock with the most remarkable progressive and symphonic aesthetics, revolving around Berry’s sensitive vocal lines. His vocal delivery is spot on and bridges the lyrical content with its music scenery. With the guitar work, atmospheric synthesizers and grandiose keyboard deliveries, its progressive tendencies are in line with the expected. Crichton puts a mark on the album’s style with his diversity of styles executed. An abundance of memorable riffs and colorful solos, frenetic playing and warm melodies, inject the variety to shoot songs into orbit.

The versatile performances are fired by energetic drum-interaction from Glockler, making this a memorable release, front to back. Bold of memorable songs with recognizable themes and catchy choruses, inspired stellar performances and remarkable musical endeavours, `Six By Six’ becomes an almost essential album. All key ingredients from their illustrious career are included, with the trio also charting new territory like only top shelf musicians can.