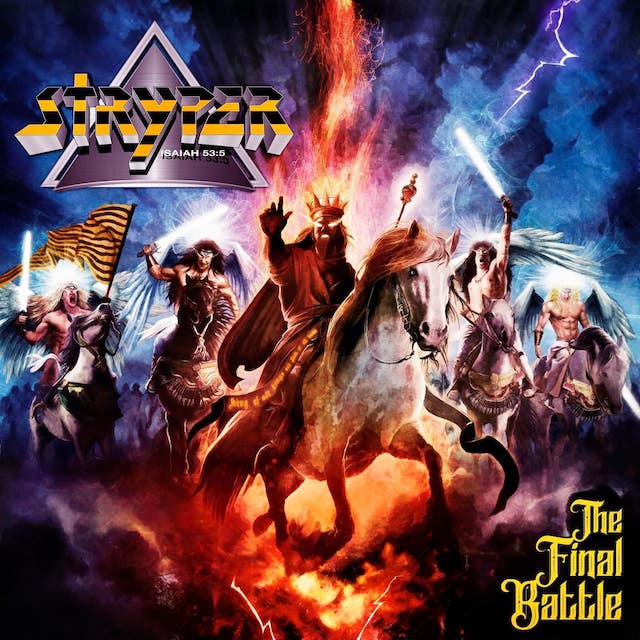 Things weren’t quite looking up for heavenly metallers Stryper the last couple of years. Struck by the setbacks impacting on all musicians and bands during the pandemic, the band hit serious health challenges with guitarist Oz Fox facing endless battles with returning brain tumors. While frontman Michael Sweet had multiple surgeries due to a detached retina and limited mobility due to that being unable to focus and reckon depth. It impacted on their recording streak which saw them flourish over the last decade. Slowly moving into a heavier direction and detaching from their preachy gospel lyrics, the band has developed coming out stronger than ever.

Benchmark are the band’s close harmony vocal deliveries, with newly added bassist Perry Richardson (ex-Firehouse) adding to the flourishing rich vocal layers and towering melodies. Stryper’s virtuoso guitar delivery is unprecedented with Oz Fox and Michael Sweet exchanging riff and solo duties in and on and off, swapping tone and style at random. It adds to the combustion of their tracks, that are written in gold. Heavy and driven, powerful and melodic. Robert Sweet’s insanely dynamic drum delivery, with (always interesting) double bass and floor interaction deepening the low groove of the band, that is perfectly added onto by Richardson’s technical playing skills, guarding the interaction and bridging the gap between the intense offload of guitars versus the band’s powerful and airtight rhythms.

And airtight this album is. There is simply no room left in the song’s dense structures that ooze with stride. The drive is immense and powerful, without losing sight of the great harmonies and layered melodies. `The Final Battle’ is chockfull all of the above.

Fading in gradually ,,Transgressor” is fired into the pit with Michael’s high-pitched scream. While hammered solid by Robert, the song breathes fire. The guitar licks and melodies are fired upon us with precision and the stretched notes reverb above the song’s dense dynamic interplay. Solos are pitch perfect. The trade-off between Sweet and Fox is insane, with Perry and Robert adding to the concoction of vigor and melodic towering buoyancy. ,,Rise To The Call” also injects the modern Stryper ingredients into the classic mix, with Michael belting out an impressive vocal job, deeming a lot of their previous releases redundant easily. There’s so much magnitude in this towering performance. Closer than ever before bordering with the hits on their first albums, while it packs the power of the last albums. So dynamic, so intense… it is Stryper 2.9 firing on all freakin’ engines!

,,See No Evil, Hear No Evil” is more progressive, with intense breaks, wonderful guitar melodies, and memorable chorus, while ,,Same Old Story” has a stabbing vocal line over the off and on of riffs. Closer to their mega-melodic rock hits, it does progress differently due to its inanely driven drum dynamics. Packing a riff originated from the bluesy scales ,,Heart & Soul” fuses the Stryper ingredients with classic rock, without losing the band’s specific harmonies and vocal interaction. Speeding up the song packs great thrive, bouncing off the wall. Bouncing like groove metal, the song’s mid-section is packed with stride. Double bass pondering and solos whaling, it all works up to the towering vocals of Michael topping the game. Perry lays down a versatile bass line with high appeal and spotlight addiction which could easily transforms into a guitar riff. Insane!

THE SPUNK OF PUNK

,,Near” does grab back to their tumultuous last couple of years, with modern soundscapes and a new dimension of interplay between guitars and keys. Michael calls out to believe, on top of his lungs, with the richest of tones. His voice is still in pristine shape and he easily switches registers. Clean, clear and powerful, he is the perfect vocalist bringing the needed depth to the multi layered vocal scales in the choruses. His vitality displayed is tremendous, and he does enrich the songs. ,,No Rest For The Wicked” is entirely different, yet it also brings in the spunk of punk, with rousing rhythms and vocal interaction. The feeling creeps up on you that `The Last Battle’ goes way deeper than any of its predecessors. It is not typical, not benchmark, even though all the trademark boxes are checked.

Not the typical rhythms are found on the pumping ,,Out, Up & In” with its stagnant approach, but continuous drive. Like rap hitting the rock ladder, Sweet roars with grinding moan. Echoing, he calls out while pitching up, answered by the rest of the band. Vocal dynamics that match Robert’s insane ponderous drum section in the middle. Pitching up, Michael hits the ultimate high and the rest of the band joins in for a close harmony chorus. Much like this song, ,,The Way, The Truth, The Life” opts a challenging title to question life in general (I suppose).

The song’s slow progressing calmth oozes confidence and stride, meanwhile questioning the scales. Much more to it than the eye can see, than the brain can covey… more than our hearts can feel and imagine. Michael’s vocal delivery is intense, Oz’ guitars are discharged with precision, also hitting the emotional stretched notes and imposing the song’s questions of gentle disillusion into your chest. It touches, deep.

THE RICH HISTORY OF STRYPER

Mega dynamic is the drum delivery that sets off ,,Till Death Do Us Part”, with Michael taking the spotlight for one of his most versatile and dimensional vocal deliveries ever. There’s so much fringe in it, that the world feels like tumbling down on ya. The song is mega melodic, and even White Lion couldn’t have done it slicker. There’s a stagnancy in its delivery, while the melodies flourish with towering melodies over Perry’s bass licks and the song’s insanely touching solo. Topped off by the vocal delivery, the song is the deepest touching song in Stryper’s rich history.

It would have been the perfect album closer, if Stryper wasn’t the most undefined band in melodic metal today. They pitch up their last effort with towering turmoil, throwing off the listener for an anger-laden fire spitting song. ,,Ashes To Ashes… Dust To Dust…” Michael roars into oblivion. The song packs sincerely gear shits that keep inflating the song without losing the power discharge mandatory to make it survive. So much going on musically…. So much we don’t comprehend. So much, we love…

`The Final Battle’ certainly is their latest effort, and hopefully not their last. With the band evolving with every album, it is hard to comprehend how well-oiled their gears grip. Grip with their fans as well as with the band as performers uniting in yellow-black attack armour. Never before have I met or heard a band that constantly reinvents their own sound without going astray, redefining their own boundaries without falling prey to the demand thrive of those around them. `The Last Battle’ is prove of the band’s insane growth and constant thrive that defines them, and metal in general. Stryper is alive and kicking, with the last word emphasized in solid gold!