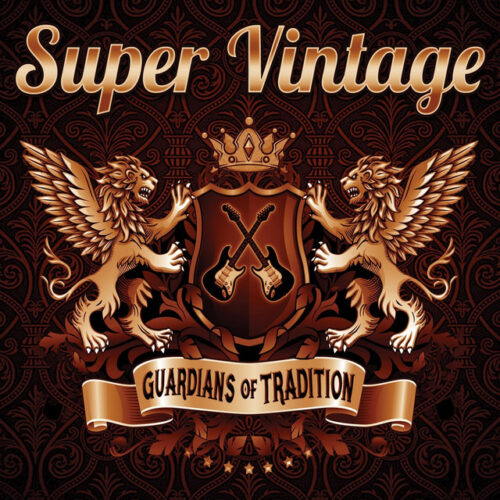 The main man of Super Vintage is guitarist/singer/producer/composer Stavros Papadopoulos who also has another band called King Mountain. With that band he released a bit earlier this year the CD ‘Tempest At The Gate’. On that record Stavros together with bass player John Christopoulos and drummer Chris Lagios plays a classic form of hard rock with a touch of metal and in real Stavros style always guitar orientated to the max. He has a few more records with King Mountain and I must say that including ‘Tempest At The Gate’ they are all very worthwhile having. Check it out on YouTube folks or even better get them on line or directly via the record label on their website.

With Super Vintage Stavros together with second guitarist Panagiotis Zabourlis, bass player Jim Moralis and again Chris Lagios serves up a different rock dish. Super Vintage is much more blues rock and southern rock orientated and the band has already some five records out this far, making ‘Guardians Of Tradition’ number six. Actually, the eleven songs on this record are much more southern rock flavoured when you compare this one with the other band releases. And as Stavros has a perfect voice with no real accent to be detected, if you would have said to me that these guys come from Florida instead of Kavala in Greece I most likely would have believed you.

The album has at times a melancholic typical southern rock character with lots of ballsy guitars and a rhythm section that purely plays to serve the guitar players. Add to that that Stavros has managed to pen down a bunch of decent songs as well and you are listening to a guitar dominated quite pure and entertaining southern rock album that we do not get to hear that often these days.

,,Rise And Fall’’, ,,Naked Truth’’, ,,Hero’’, ,,Indian Soul’’, ,,Rolling Thunder’’, ,,Pieces Of My Broken Heart’’, the title track, ,,Southern Ride’’, ,,Down Down’’ (nothing to do with Status Quo), ,,T For Tennessee‘’ and ,,End Of The Road’’ are all quite traditional and certainly not too complicated to follow, but they are played from the heart and soul of a man that has become one of the most reliable and active rock merchants that Greece has to offer. If you cherish southern rock ‘Guardians Of Tradition’ is at the moment one of the best records in that genre.