Review | The Ferrymen – One More River To Cross 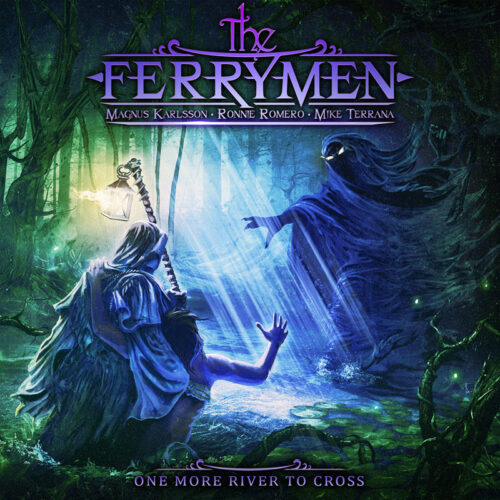 Review | The Ferrymen – One More River To Cross

If you are a fan of vocalist Ronnie Romero you have had an expensive time in the last couple of years as the man was featured on many albums. Overkill? Many say so. But then when you are in demand you have to strike while the iron is hot and Ronnie sure has lived up to that. One of the several bands and projects he has been involved with is The Ferrymen, a cooperation between Romero, US drummer Mike Terrana and Swedish maestro Magnus Karlsson.

‘One More River To Cross’ is the third strike of the trio. Magnus Karlsson has yet again delivered the bulk of the song material that is constructed around the mighty Romero pipes, with Terrana adding his power drumming for good size. If you are familiar with the material that Magnus Karlsson has written for Allen/Lande and his own Magnus Karlsson Freefall project I suppose this album with eleven songs might not really surprise you as Karlsson has this particular guitar sound that makes him stand out in a way but he displayed this sound also on the above-mentioned projects. The emphasis on ‘One More River To Cross’ is on pure melodic and up-tempo metal where Romero can stretch his vocal chords to the maximum and Karlsson impresses with his unique multi-instrumental skills.

But if you ask me if this third album adds anything new to the repertoire that the band served up on the self-titled debut-album from 2017 and the 2019 release ‘A New Evil’ I guess the answer must be not really. It is more a very solid consolidation. It is absolutely a good album, don’t get me wrong, but The Ferrymen have not been able to improve or develop any further. I suppose the band can get away with ‘One More River To Cross’ this time but the trio needs to take stock and maybe rethink or slightly adjust their musical strategy if they are going to continue in the future in the hope to make a real impact.