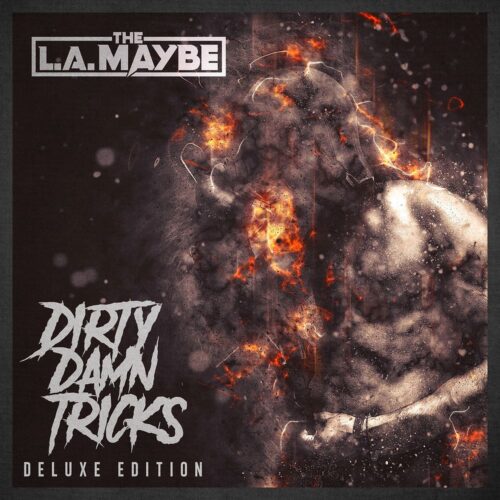 Dropping March of 2021, The L.A. Maybe’s ‘Dirty Damn Tricks’ proven a calling card not easily surpassed. With a pandemic at full swing, many locked up inside their homes, the album however did not have the spread necessary to reach the masses. Though turmoil still hits the globe, The L.A. Maybe revisits the release and boiled up a deluxe edition to grip momentum. A deluxe edition containing some acoustic versions of their songs, as well as demo tracks, to convince the listener. For those who missed the initial release, here’s a brief review of ‘Dirty Damn Tricks’.

Man at the helm of The L.A. Maybe is lead vocalist Alvi Robinson. One of only four auditioning contendors to replace Brian Johnson of rock flagship AC/DC in 2016!

His grit and growl are spot on, and the soar in his vocals more than once push their sound above the fold. The internal combustion of tracks is intense. The greasy chug of riffs and bluesy welling solos add to the joy of listening. ‘Dirty Damn Tricks’ is one of the albums that surfs the tidal wave of classic rock’s triumphant return. The album packs tremendous groove, gigantic hooks and nesting melodies, all stirred up in a broiling potion of anthemic driven gritty rockers exploding.

Exploding is exactly what the banger ,,Mr. Danger” does, opening the album. Introducing a flawless riff with compelling hook, the song unfolds with daunting dirty rawness, working towards the nesting chorus, and unloading intense bluesy interplay in the solos and melodies. Guitar tandem Dallas Dwight and Drizzle Silvera step up to match Alvi’s powerhouse vocal delivery. Insane dynamics are unleashed on the high paced power rocker ,,Sucker Punch”, which makes AC/DC look rather pale.

Rashaan Lacey’s six string low bass throb and Ryan Fosnow’s hammering and dynamic drum beat are providing the loud grooving foundation to build the songs upon. There’s strut, swagger and swinging groove pulling the song forward. Classic grooving are songs like ,,She’s Reckless” with its welling Hammond and memorable hook, the flouncing ,,Take Me Away” with its sweeping melody and bluesy sliding guitars, or ,,Sweet” you get administered a modern symbioses of bar ‘n grill gloat with parading stride over sturdy driving bluesy riffs and welling melodies.

,,Fake” sees the band fire on all engines with its ,,Kickstart My Heart” vibe. Combusted by its floor and bass drum dynamics paving the road for the flourishing guitars which inject a grandiose drive working towards the triumphant chorus. Robinson’s uhhs and ahhs weld with the sleazy melodic chorus, while his ballsy rough howls add grit and dirt to the poise. A question and answer dialogue pitches ,,Up Next To You” into action. The song’s deep emotive subject scatters off the track’s musical interaction and spiting undertone.

More southern charm adorns the strutting ,,Oh Sugar” with its pulsating bass and guitar plucking. Robinson unleashes his top voice, bearing reminiscence to the late Bon Scott while bordering with the melodic accolades of Tesla’s Jeff Keith, searing the song’s afterburners. ,,Peace Of Mind” packs great dynamics over the slow motioned lingering piano and refrain before combusting with highly melodic appeal. The song’s chorus is impeccable and Alvi taps an entirely different vein, reminiscent to vocal deliveries of Blacktop Mojo’s Matt James, who blends Chris Cornell’s tone with a loud underscore, as where Robinson pitches it higher. The oozing comfort of tone and hoarse notes fused to the gritty AC/DC-tinged top voice unloads enormous potential in the song’s appeal.

Shifting down some gears The L.A. Maybe take things to a different level on the heart touching ,,When I’m Gone” with its wrenching melody and power ballad hook and vocals. “…will you raise your voice and sing my song…”, followed by intense gripping guitarsolo and piano drizzle, touches deep. Powerful and profound the song bears the marks of greatness. Alvi Robinson delves from his widest range, while guitars exchange jawdropping melodies and intricate soloing.

How well the song’s are crafted is displayed on the acoustic renditions on this deluxe edition. ,,Peace of Mind” is an example. The song sees an entirely different vocal delivery with Robinson closer to Matt James’ and Cornell’s warm register. It benefits the song which gains momentum. Rasheen’s low bass is taking a dominant role in the second part of the song, which is tasteful crafted against the acoustic guitars interacting. It oozes calmth and wells with emotion. ,,When I’m Gone” also benefits this acoustic make over, with more gut-wrecking and thought evoking pretentions timidly discharged. The outcome is soo gripping, it wrecks. Especially in the last section with a soul choirs empowering the lyrics and Alvi’s last notes going down in agony.

Enitely different is the acoustic action unloaded on ,,Oh Sugar”, with its excellent (bongo) percussion, piano tingles and plucking guitars. The backbone is build on the song’s prancing riff that is lushed up. The acoustic solo and bonos are enhance the song’s fireside character.

,,The Long Road” is a brand new track that comes close to the Tesla-styled ballads. Deep lyrics and great vocal interplay, over lush acoustic structures, the song enrolls with impact. Accompanied by a scenic video, the song matches cinematic allure and uplifts your emotion during today’s challenging times.

Demo tracks ,,Peace of Mind” and ,,She’s Reckless” display the band’s vision being close to the end product while demoing. Less dense, organicly close to the delivery onstage, fun and determintation scatter from the recordings. No overdubs the songs radiate pride, especially ,,She’s Reckless”.

The L.A. Maybe delivered one hell of an album with ‘Dirty Damn Tricks’ and unline its pristine quality of songs with the acoustic renditions presented on this deluxe version. All songs hold up fiormly and the band’s musical deliverance is phenomenal. Rock solid production does the rest, emphasizing the band’s dynamics and capturing The L.A. Maybe’s anthemic swing and swager. Enjoyable are the instrumental versions included which evoke you in belting out the songs yourself.

A must hear for sure!