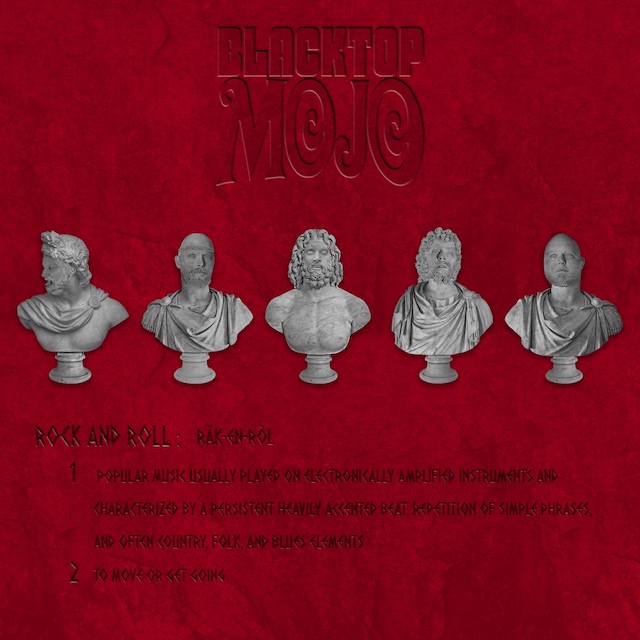 `Blacktop Mojo’, dubbed `Album 4’ by the band themselves, is the next strike for Texan metal hopefuls Blacktop Mojo. Steadily working on their careers and expanding their reach, the band has evolved into an insanely high octane and anticipated live act taking US festivals by storm. Embarking on a 50+ dates club tour in support of the new record, the band builds momentum towards the big stages.

This self-titled CD is the next step up. It features all the band’s benchmark ingredients without lacking their imposing thrive and drive pushing the envelope further.

THE MOJO IS WORKING

F@ck, ,,Wicked Woman” hits. The song is coming together in such rapid movement it allows only mere moments to breath. Heavy riffs with scorching Southern drive and grungy tone it ploughs onwards with towering allure. Constructed around a nesting melody and insane riff it instantly fletches Blacktop Mojo’s muscles and gets the mojo working. Especially vocalist Matt James seems to have grown again while the chorus also reveals also the band’s powerful vocal interaction. The vocal harmonies are simply jaw dropping and manifest in perfection. Harmonies which also are key in the execution of duties by the guitar tandem Ryan Kiefer and Chuck Wepfer as displayed on the piercing solo. Top notch!

Wordplay follows on the ominous opened ,,Bed Tundy” gradually building tension before unleashing its larger than life pretentions. The song falls back to the band’s impressive `Under The Sun’ record. Yet also features the appealing melodic ingredients from the equally impressive `Burn The Ships’. Nathan Gillis lays down a rock-solid beat with Matt Curtis adding the low vibe, building to the anthemic last 90 seconds of sheer melodic mayhem. Guitars are muscular while the overall groove sets places afire. Stadium rock with grungy edge packing tremendous swagger.

ONE OF ROCK’S FINEST VOICES

Ignited by close harmony nesting melodies picking up power with every stoke of Gillis’ drums. Just check out the close harmony guitars aligning with the vocal melody and unloading its tremendous potential in the tasteful solo before Matt takes the helm again to bring it home. The song swings like classic Tesla on steroids!

Another talent is composing memorable (semi) ballads. Timid instrumentation barred to the essentials, with Matt’s vocals empowering the mellow sentiments of the song. ,,Jealousy” meanders in mood before stirring up emotions and unleashing another monumental chorus with powerful hook. The acoustic mood is endured on the warm interlude ,,Make Believe” with Matt belting another divine performance while acoustic (flamenco) guitars enhance, and take it into the warm and moody opening of ,,Darlin I Won’t Tell”, soon picking up pace and unloading sheer power in its anger-laden bridge. Tastefully composed with Curtis’ pulsating bass in the front end of the mix the song switches fervour and returns to form before delving deeper with Kramer belting out the bridge and strong chorus. “You can tell me the truth now honey, Darlin’ I won’t tell…” echoes into its dying seconds.

“Come and lay your money down” in high pitched feminine vocals, the following ,,Do It For The Money” instantly breaks from the slick expectations with a blunt riffs and stark raving bass and Matt’s powerhouse vocals. The drums are full of swagger and the groove is intense while its chorus is slick, soulful and sticky. “Hair metal grunge” applies here. Whatta track!

Whammy blues chords and slide guitar set ,,Hold Me Down” in motion oozing great southern stride and ravishing soul. Welling keys add to the melancholic atmosphere while guitars slide and James belts another pristine vocal job touching your heart and soul. The chorus is impressive and instantly nesting (like most). Tension building the gritty ,,Cough” with its plucking guitars and chord progression fused with low-end bass propelling it. Gillis’ drums are elicit stirring up to the song’s memorable chorus. Gelling like crazy the song redefines melodic boundaries.

Much like personal favourite ,,Prodigal” from `Burn The Ships’, ,,Tail Lights’’ instantly touches with your inner emotions. A ballad which, in the roaring eighties, would have landed a heavy rotation spot on any rock radio station across the globe. The emotions well tremendously with Matt belting a heart touching performancethat is emphasized by the elusive playing of the band. Its whammy reoccurring solo pitches with precise perfection making ,,Tail Lights” orbit.

`Blacktop Mojo’, or if you like `Album 4’, is an exclamation point to the Blacktop Mojo catalogue, featuring all the key ingredients to break big. If anything orbits, it is this quintet! Adjusting their beacons and reinvent themselves continuously by exploring their exponential craftmanship. Ruffling the edges with Southern panache while reviving the grungy heartfelt passion patched up in stadium pretentious rock hymns with tremendous hooks, heavy groove and memorable melodies. Songs like ,,Rewind” and ,,Wicked Woman” see fists pumping the air in the tens of thousands, while ,,Tail Lights” and ,,Hold Me Down” guzzle emotions re-igniting the classic power ballad on rock radio with pristine power.