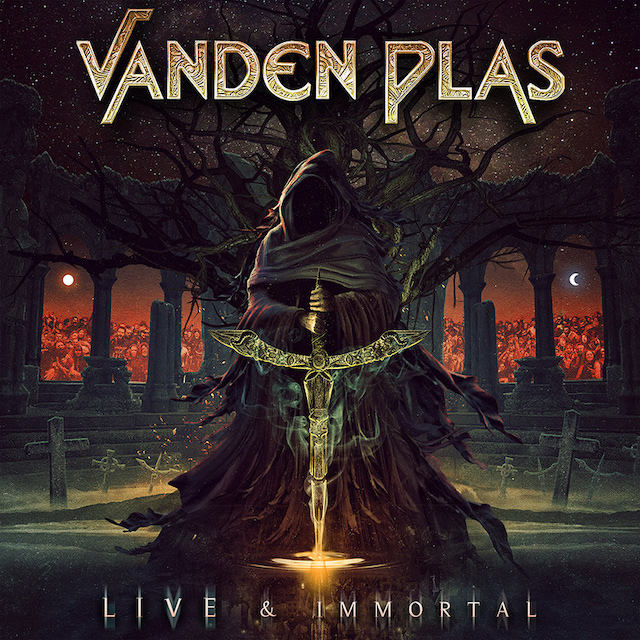 Much like my colleague Michel was surprised of the recording for `Seraphic Liveworks’ were shelved 6 years before its actual release, the new live album underwent the same path. Recorded during their `Chronicles of the Immortals: Netherworld 2’-tour, the release of the brand new `Live & Immortal’ comes in unexplainably late for fans of Vanden Plas. Released on 2LP, 2CD and long form Blu-ray, it is the band’s first full concert footage, shot at their hometown of Kaiserslautern on the 30th of December 2016. Indeed, right before the actual release of `Seraphic Liveworks’.

With its setlist based on the epic 2-piece `Chronicles of the Immortals’, Vanden Plas puts forth a benchmark performance in which they pull through both conceptual album’s finest moments, as well as delivering some top-notch performances of their celebrated classic cuts. The band is in fine form displaying their insane talents as musicians and performers.

With Andreas Lill on drums and Torsten Reichtert plucking the bass strings, they ensure themselves of a top-notch rhythm section, solid and extremely versatile. Radiation confidence, with Reichert’s dynamic low strokes, they have an under-exposed monster of a player in their ranks. The dynamics are forceful and subtle at the same time, with Andreas’ resourceful, yet heavy drumming, fortifying their dark and ominous prog sound. Günther Werno creates a sonic lush tapestry of keys enriching the band’s sound. Towering whirls pumping forward with bombast, ardent piano swirls for subtle moments, and overall rich and diligent playing to boost the songs with cinematic splendour.

Andreas’ brother Stephan Lill is the undisclosed champion of modesty. As one of metal’s finest shredders, Stephan is overlooked as a defining player. Since the band’s founding in the mid-eighties, he has put a mark on progressive metal. Intense memorable riffs are forceful and driven, while they resonate with elegance and unwind with intensity and style. His wonderful melodies are trademark and deepen the band’s overall heavy dark sound, giving it that glorious and wonderous feeling. Switching scales and tone, his varied and intense soloing complements the memorable melodies and breaks.

With Andy Kuntz the Kaiserslautern quintet hold one of metal’s better vocalists. Though typical in his (nasal) tone, Kuntz belts out the most remarkable powerful chants and manages to inject them with striking appeal and warmth. His musical training certainly adds to his performance, with his modest but on par stage presence making him the elaborate frontman.
The interaction and drive of the band is well captured and the overall sound is powerful. It brings the live ambiance to your home with a sparkling clean mix and fist punching production, warping you directly into the venue, frontstage!

The songs are held up by the band’s tremendous drive and elevate with towering power. Executed with a focus on the original recording, they are close to the studio recordings, but pack a lot more zest and display drive. `Live & Immortal’ captures great momentum with their home crowd cheering them up. The visions chapters from their `Netherworld’ albums fall in line with the numerous classics. Opened by the narrative ,,Vision 1ne”, the show kicks into gear with the marvellous ,,Vision 3hree – Godmaker”, packed with crunchy riffs and shifting tempos adding to its mood.

,,Into The Sun”, with Kuntz whaling his powerhouse vocals, and ,,Frequency” pump up the excitement. Wonderful versions of the emotional high flyer ,,Scarlet Flower Fields” and melodic progger ,,Holes In The Sky” have us move highlight to highlight. Absolutely golden is the mega melodic and hook-laden ,,I Can See”that soon finds them revisiting The Netherworlds for ,,Vision 16teen – Diabolica Comedia” and the urgent and aggressive ,,13teen – Stone Roses Edge”.

THE BINDING FACTOR AND STORYTELLING

Oldie ,,How Many Tears” proves the perfect crowd pleaser breaking from the insane dynamics of `Netherworlds’ briefly. Revisiting the anthemic ,,18teen – The Last Fight” with its big chops and eponymous rouse they conclude the Netherworlds chop of the setlist. The chapters prove their theatrical live appeal with gripping performances by the band, and Kuntz radiating his melancholic stride and powerful bite. Belting in rich, engaging tone he is the binding factor in delivery of power and emotion. His dramatic phrasing finds an equal in the melodic delivery of Lill’s clean and wonderful storytelling eluding with memorable themes and melodies.

When they hit ,,Iodic Rain” the band converges prog turmoil to hit an ultimate high. Andreas pulls the song forward with Reichert’s pulsating bass thumping. Riff and keys balanced, Kuntz belts another charismatic performance. Masterful, skilful they move into the colorful ,,The Final Murder”, which packs of the band’s benchmark ingredients, towering with warmth welling emotion. From the acoustic opening into the haunting passages and its powerful breakdown: it is stellar. A perfect closer, but their home audience demands the band back onto stage.

The epic ,,Christ O”, with its towering bombastic magnitude and odd time changes storms forward. Werno’s keys dominating and Lill’s arpeggios fired, it shifts back and forth in gears constantly. The urging music finds a peak in its memorable chorus and Kuntz’ spot on delivery. Playing ,,Christ O”, it has to be followed by the amazing ,,Postcard To God”, one of their best for sure. Like a bouncer takes you outside for a beating, it builds with epic accolades and closes the remarkable live performance.

`Live & Immortal’ is the 3rd live recording of the band, but certainly displays the band at their progressive best. Captivating performances laced with top shelf musicianship in front of an enthusiastic home audience. It is Vanden Plas at their very best, and with this one recorded 6 years ago, I expect the new live recording of 2022 to drop in 2028. Be aware!