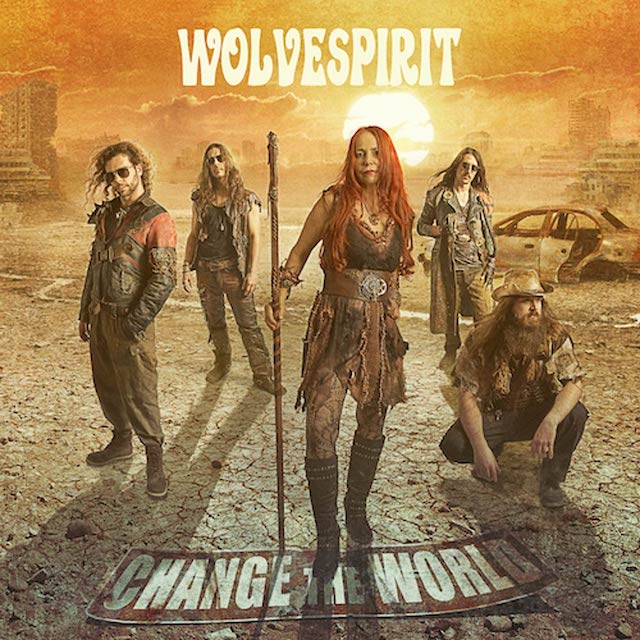 A band that lives and breathes music is WolveSpirit from Würzburg, Germany. Living together on their own property they are close to being an art-communion revolving about independency, art and music, with total freedom. Since their existence (A.D 2011) the band has steadily built their own sound and career, resulting in this brand-new album `Change the World’ that is deeply rooted in classic rock and blues rock. Gritty, dirty and driven the band pulls forward with stride.

WolveSpirit means business on their new release, bursting into energy laden melodic power rockers with raw melodic appeal. Heavy drum and throbbing bass shoot forward with nasty guitars backing Debby Craft’s vocals taking point. Her voice is raw and energetic, the performance bold as brass. ,,Don’t You Know” is an energy packed power rocker with tons of blues sipping through. ,,Drown You Down” is another powerful song with swagger and swing. Gritty, nasty and raw it kicks up gravel and dirt. Rio Wolfhart’s urging guitar and Oliver Wolfhart’s powerful deep bass rattle the backbone. Bluesy swing and hard rock strut with psychedelic elements pull the song to its slick memorable chorus.

Blues that is also dominating guitar driven tracks like ,,Hells Bells are Ringing” and ,,Time is Running”, uniting classic ingredients and great harmonies with gritty appeal and drive. Marco Tullius’ keys and Hammond organ injects a Purple-esque backbone over the roaring bassline and Martin ‘The Animal’s dynamics drums. Craft’s vocals are powerful and raspy, with tons of swagger adding to the potion.

THE ERA OF SPAGHETTI WESTERNS

,,Strong as the Wind” pulls forward with the same organic instrumentation and unloads a big chorus with nesting melody and swirling keys injecting a slick touch to the Hammond. Swinging it up is the solid danceable rocker ,,Crazy” with its nightclub tendency and rock strut. Americana and bluesy dry instrumentation outline the song for Deb’s neurotic and tasteful vocal work. Absolute hammer track is the album’s 6-minute plus title track that is drenched in blues and old school rock ‘n roll, with cinematic element. Echoing psychedelic effect open to a dry riff and technical bass lines. The song wells with emotion and Craft’s voice is powering up frequently over the thundering musical interaction.

The welling slow paced ,,Thunder and Lightning” is tapping a different vein with its stop ‘n go breaks and blunt drumming. There’s a sincere Bad Co. vibe present with Blues Pills’ power and echoing psyche. Debbie’s pronunciation is bordering with American slang. Not surprising as she is the typical American army brat raised all over the world, chewing out a big accent that fits the profile of the song. It towers in ,,Fallen” with its talking blues, uniting the gritty heart pouring blues with Craft’s powerful voice and an Americana touch warping you to the era of spaghetti westerns and watering holes.

Another song with ingredients unlikely cooked up in this genre is ,,Over the Rainbow”, with its dominant bass and subtle guitar and drums that ooze a jazzy (smoky) atmosphere. The chorus is slick and welling with emotion, with Craft belting out the agony in prefect dozes. It deepens the band’s sound and adds to the lustre and glance of their album and style. ,,I Belong to You” pitches up the expectations further. Not the regular tearjerking rock ballad, but a blues drenched outpour of emotions with tons of swing and strut. Heavily orchestrated in its chorus it has Debbie belting an emotional tone with soulful gloom. The bass again dominates the mix and drums scatter over the tasteful keys and organ. A howling solo escalates the agony with weeping string bending and piercing pitches. It wells with emotions and agony.

Nasty rock ‘n roll that touches deep and hits the swinging notes frequently. The musical delivery is diverse and tasteful, not refraining to the classic ingredients. Morphing their songs around the bluesy rock backbone, they brew up soulful swinging moments, pumping rockers with rock ’n roll grit and psychedelic hypnotizing sections luring you in. The bass is full frontal and energy driven. Guitars are bluesy edged and sober and with the Hammond more than once pumping up the organic loud sound. Craft is the key feature that binds the fusion of styles with a raw and energetic delivery.

This is a band for the summer festivals and smoky clubs and venues. Have the blood boiling and your beers raised! Let’s party and rock!