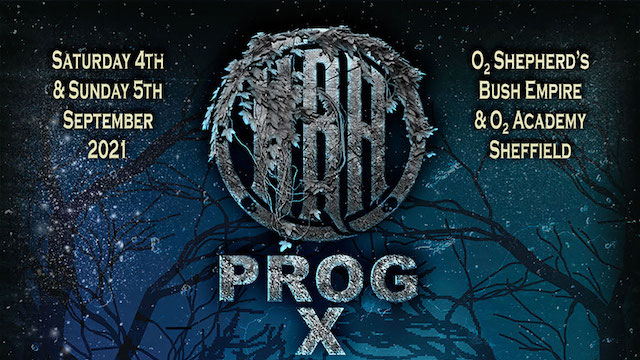 Greetings dear people and how are you? It’s been a while has it not?

Anyway we, Threshold that is, had a couple of shows last month for HRH Prog, and what fun they were too! Considering that the last time we played together was back in 2019 in Barcelona and Madrid. Oh my, how time flies when you’re sitting around doing nothing for two years! The 3rd and 4th of September were played at The O2 Academy in Sheffield and The O2 Shepherd’s Bush Empire in London. Unfortunately, due to the current climate, not as many people showed as they would have, so there was not a capacity crowd at either venue, but those who were there witnessed some fine performances by all the bands that graced both stages. Threshold were second to last on both nights, and The Enid closed the festival.

The day started for me a little scary as I was taken on a detour from my usual route to meet the guys at Virginia Water. I was taken miles out of my way as the powers that be decided to close the motorway. Anyway, I eventually arrived at my destination and the guys were sympathetic to my plight. We proceeded with our greetings, loaded up the van, and off we went. We arrived at the venue in Sheffield in good time, and were introduced to the stage manager whom I’d met before at a previous festival. We were taken into the venue via the underground carpark with all of our gear and had to negotiate a car or two.

Once inside we were handed our passes and shown to our dressing room. Dare I say, it was a bit Spinal Tap as we went through a labyrinth of corridors and stairs. I was beginning to panic as I thought I’d never find my way to the stage come show time! Anyhow, not before long it was time for us to set up and get onstage to do a line check and play. Another mild panic as I thought I’d lost a spring to my bass drum pedal, but luckily these things don’t fall too far from home and I was able to assemble the said article and continue with my set up.

I must say that I have missed doing this, we all have and it was great to be performing again. We did our setup, line check and off we went. Good evening everybody, the show started with our intro. But do you know, I can’t even remember what song we played first in the set? What I do remember is that it was over in a flash for the next thing I knew, I was packing up my gear and heading towards the dressing room. It was though, very enjoyable, and in spite being a little rusty those who were there had a great time too. But, the highlight of the show for me was ‘Snowblind’, the guys let me off the reigns a little! Lol!

So after tearing down the gear and loading up the van, we said our thank yous and goodbyes and it was off to the Travelodge to calm ourselves down and rest before the journey back to London the next day, which didn’t take as long as I expected, as time flies whether you’re having fun or not these days!

So, we arrive at the London venue and it begins again, pick up passes, unload the gear, to which there was help, we’re shown to the dressing room and wait our turn to play. The Empire is a wonderful theatre with a nice big stage, as was the O2 Academy in Sheffield. But the Empire is also seated, but fans had the choice to come to the front which they did. It was the diehard who attended both shows, the real music lovers who will brave wind and rain, hurricanes and volcanoes to see their favourite bands.

This Sunday night’s performance was a little more polished than the night before, it felt as though we had warmed up and we were ready to go. I do like big stages, they seem to make you larger than you are, if you get my drift? The movements are more exaggerated, there’s more room expression. My one complaint was that there weren’t any other shows as we felt the machine was oiled and primed for what was next to come. But unfortunately, there are no more shows for the foreseeable future, so all of you Threshold fans will just have to wait! Not unless you know something I don’t?

All in all, we had a great weekend as it was good to be in the company of the fellow band members and create more memories. What more could you ask for? Thanks to all those who attended the shows and we hope you had as much fun as we did and see you soon?