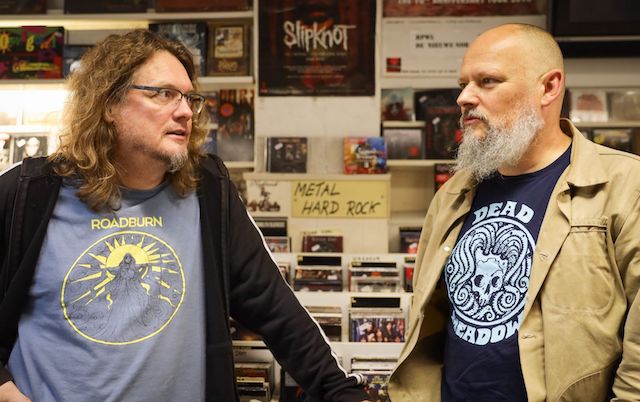 Who can still feel the musical excitement, the sizzling and buzzing of the late 70s and the first half of the 80s? The rise of heavy metal music, raw and pure, that became a strong new ally of the punk movement at the time. In the obscure corners of the underground, pioneers were creating a significant subculture with a determent Do-It-Yourself-mentality, word of mouth campaigns, camaraderie, tape trading and a hunger and passion for screaming guitars and hard music with cool melodies. A movement that would become of an important influence on the development of the music industry and eventually also mainstream society, pop culture and even fashion. Well, who could ever imagine that in those early days when metal heads were not accepted by society at all?

So, it all started when the New Wave Of British Heavy Metal [NWOBHM] reached the European mainland in those late 70s and cartelized an unstoppable musical revolution. Motörhead, Judas Priest, Iron Maiden, Diamond Head, Raven, Saxon and Def Leppard were our heroes in the frontline who set the world on fire.

Also authors A.H.J. Dautzenberg and Vincent Loozen, who are two mid-aged Dutch guys and grew up with the rise of heavy metal in the South of The Netherlands, remember those days and still are dedicated metal fans. A.H.J. and Vincent decided that it was about time to honour the New Wave Of Low Lands Heavy Metal, the important years from 1979 until 1984, that was a response to the NWOBHM. On 8th April they release the compilation `Crash! Bang! Wallop’ on double CD and double vinyl and an exclusive box set that includes a 76-page book.

A.H.J. and Vincent delivered a fantastic document with great cultural-historical value, featuring pioneers like Picture, Killer, Bodine, Hammerhawk, Teaser and Acid. The book contains interviews, reports, photos, tour posters and such and it all is a great trip down to memory lane. HeadBangers LifeStyle’s Liselotte `Lilo’ took a moment to ask A.H.J. and Vincent some questions about this cool project.

A TRIBUTE TO THE PIONEERS

Why is it important and relevant to you, to document the early heavy metal history of The Netherlands and Belgium on a compilation CD (and vinyl) and also with a book?
A: ,,The genre’s coming of age ran parallel to that of our own adolescence. So, in a way we’re cultivating our youth, anchoring it to the rise of our favorite music genre. We chose The Netherlands and Belgium because we attended the most concerts there in those years, often by bicycle. Moreover, the scene in both countries was strongly intertwined, at least in our experience.’’
VL: ,,I couldn’t have said it better.’’

What sparked you to do such a project at this point in your life?
A: ,,Looking back, the NWOLLHM, in response to the NWOBHM, appears to have had a huge impact on the development of the live scene in both countries. We still regularly visit concerts and have been able to closely follow the professionalization of the venues. We wanted to pay tribute to the pioneers, to the years when it all started.’’
VL: ,,The bands, festivals and concerts from that early period are simply an important piece of Dutch/Belgian cultural history that has ensured that heavy music has become one of the most favorite music styles in our regions, whose founders 40 years later do not receive the recognition they deserve.’’

We wanted to pay tribute to the pioneers, to the years when it all started.

Did you realize the original plan or did you do things different along the way? While making it did you stay true to an old-school, DIY mentality like back in the days?
VL: ,,We have remained fairly faithful to our plan to select bands from the period 1979-1984, the period that can be considered the beginning of Heavy Metal. We only made an exception for 2 bands from 1978, the Dutch Teaser and the Belgian S to S. Simply because they were both, in a different way, precursors of the Heavy Metal wave that rolled over our countries from 1979.’’
A: ,,We wanted to limit ourselves to the early years, the DIY years, because commerce hardly played a role at that time. You can hear the enthusiasm, the thirst for adventure, the naivety, the search and trying. There was no formula yet, market-oriented formulas. That spontaneity remains infectious and still gives energy.’’

THE BAND AND SONG SELECTION

What were your criteria for the selection of the bands to feature on this release? Then the criteria for the songs and how did you get the permission to use these songs?
A: ,,We didn’t necessarily aim for a representative overview, but tried to sketch the wide spread of hard rock and heavy metal with our selection. So, as many colors as possible. Not only did we go back to our own collection (cassette tapes!), we also explored bands that we didn’t know at the time. Like The Rogers, a favorite on the compilation. A moderately produced song, as befits DIY at the time, but a true pearl. As if surf king Dick Dale is lost in hell. Unique.’’
VL: ,,Excelsior Recordings has arranged the rights to the songs we chose.’’

What were your criteria for making the book? What do you especially want to show the reader? And how did you get your hands on all the illustrations?
A: ,,We wanted to use the stories and reports to outline the context of the compilation, to illustrate its cultural-historical value. That is why we spoke to musicians as well as organisers, journalists and fans alike. To evoke that period, we chose to format the book as a tour book from that time. In addition, many photos, cards, posters, etc. had to be included. They come partly from our own collection, and partly from that of the interviewees. Maarten Donders created the artwork on the advice of Walter ‘mister Roadburn’ Hoeijmakers.’’
VL: ,,Maarten has earned his spurs with his work for Roadburn, Opeth, Brutus, SUNN O))) and Danko Jones, but it was quite a challenge to ‘portrait’ early metal. Maarten is younger than us but clearly knows his classics. He sensed the period perfectly. He made a typical eighties metal painting for the inside of the gatefold and the logo was done so well that we immediately had a patch made of it.’’

We wanted to use the stories and reports to outline the context of the compilation, to illustrate its cultural-historical value.

Why do you stick with the years 1979-1984?
A: ,,Simply put, in 1979 the NWOLLHM started rolling. 1984 marks the transition to hairspray and eyeliner. Market thinking took off, resulting in a lot of formula work and a pose that came over from the US. This is of course an exaggerated picture, but then again it is not. Anyway, after 1984 the scene changed from a rough sea to a wave pool in our eyes. Only to go back to being rambunctious years later, but that’s another story. Thanks to the pioneers.’’
VL: ,,This was the period before Heavy Metal broke down into all kinds of subgenres. I have always liked the wide spread stance of Heavy Metal. I still like death, speed, thrash, prog or even AOR.’’

A TRIP DOWN MEMORY LANE

Working together on this project must have been a great trip down memory lane and a very enjoyable personal journey. Can you describe how it was and the effect it had on your current, daily life? And do you think the modern metal community and the young generation of metal heads recognize this feeling? Or is it something you cannot compare?
A: ,,I am a regular visitor of Roadburn, the most adventurous metal festival in the world. A place where transgression is celebrated, where musical boundaries are stretched, crossed and ignored. Which is awesome. When NWOBHM plays between concerts, a large part of the audience sings along, including the younger visitors. They appreciate the old school, know where the music comes from. They have a lot of respect for that time.’’
VL: ,,In those early days I was very active within the local metal scene. We organized concerts, bus trips and started a fan club for DIO. It was nice for me to review all those things again and especially to reminisce about visiting concerts by, among others, many bands that are now on the compilation. I think those first experiences make an extra impression and shape your taste in later life. That was the case for us and will undoubtedly still be the same for young metalheads.’’

I also think that it is an interesting collector’s item for the real old school metal fan who does not speak Dutch.

The 76-page book that goes along with the exclusive box has become a fantastic document and it seems like a lot of work. Though it is written in Dutch which seems only worth buying for those who can read the Dutch language. Isn’t that a pity maybe?
A: ,,Perhaps, but the photos and illustrations will hopefully provide sufficient recognition. The vinyl can also be purchased separately and the enclosed liner notes are in English. These are also included as a booklet with the CD version.’’
VL: ,,I also think that it is an interesting collector’s item for the real old school metal fan who does not speak Dutch. The book is very personal with only stories from Belgium and The Netherlands. It felt unnatural to publish this in English, but Google translate was invented for a reason.’’

How has there been response to this project so far? Both by the press and by those who cooperated and were interviewed?
VL: ,,The enthusiasm is enormous. The scene took place in small communities at the time. Sometimes those communities found each other and the “family” grew a little bit. Metal was pure underground in the early years.’’
A: ,,We conclude from the responses that people like that those years have been documented by us, that their youth has been documented by us. To quote Gerard Reve: ‘It has been seen, it has not gone unnoticed.‘’’

What do you hope to accomplish with this release?
A: ,,That we do a lot of people a favor with this record and book. Fans, musicians and music lovers in the broadest sense of the word.’’

Aardschok Magazine runs like a red thread through our book

The release is the 8th of April and there will be an album presentation during the Mega Record & CD Fair in Brabanthallen, Den Bosch. What can we expect from this presentation?
A: ,,We interview Arjen Lucassen about those years, about their significance for his career. Arjen has invited the living members of Mover, his first band, for the occasion. He transferred a demo recording from 1979 for us from a cassette. He is overjoyed that a Mover song will be released for the first time via the compilation, more than forty years later.’’
VL: ,,Arjen Lucassen will also do a signing session after the presentation. But before that, we will also talk to Metal Mike. Aardschok Magazine runs like a red thread through our book. Not only do we, but also the interviewees, appreciate the pioneering work of Mike, André and Co. The magazine has been around for over forty years and that is more than worth congratulating.’’

How limited is this release and where can we order it?
VL: ,,`Crash! Bang! Wallop!’ is available from 8 April in better record stores in Belgium and The Netherlands and available online just about everywhere [click HERE].
For record stores in other countries, the release can also be ordered through Bertus distribution. But only while supplies last because the edition is limited. Only 750 of the Box set with record, book and patch, the double vinyl and the CD are available.”