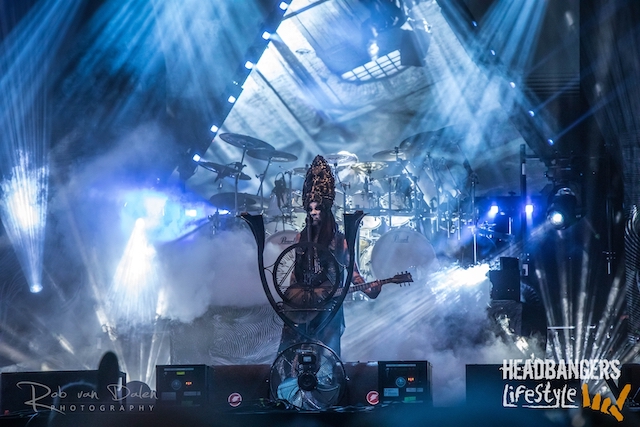 Amidst two giant horns of the Behemoth’s enormous skull his throne rises. Drenched in mist and mystic of the ages, the horned sabbatical goat Baphomet resides. His wings spread wide while fire devours the night sky. Sparkles fly up high and the deep dark night is embraced by the warmth of the occult chants for thy.

THE GODS OF THE UNDERWORLD

Here we stand embracing the relativity of our lives while we expose ourselves to the Gods of the underworld. The quest bringing us to this part of the underworld has been long. Sacrum gave us light before we set course to the deepest and darkest caverns of the underworld, where pools of water as dark as Behemoth’s Profanum gave us courage and strength to delve deeper. Paths into the pitch black.

An endeavour to summon the beast and meet with the master. Flames dancing around us. His throne he rises. Pools of blood spilled, darkness dwelling. Bones piled as grotesque art pieces as remnants of those who fell defending their religion. He breathes fire and questions our sincerity. Why we seek refuge?

In these dying days of planet earth, we oppose the reign of money ruled democracy and the doctrine of the catholic church. We embrace the sanctuary of the temple of the dark, not allowed to bow down but stand tall. Die standing, don’t live on your knees. It is now we change the future. It is not mother Earth dying. It is mankind fading into history.

Surrounded by occult and mystique in hard rock and Heavy Metal the horned deity is featured on numerous album artworks and thus widely adopted by the metal community. Venom, since `Welcome to Hell’, embraced the demi god frequently returning on their album art. The debuting album featured a rendered version of the famous Goat Pentagram “Clef de la Magie Noire” by French occultist Stanislas de Guaita from 1897. The image of the horned One dates back as far as 1098 when the name Baphomet first appeared as crusader Anselm of Ribemont wrote:

As the next day dawned, they called loudly upon Baphometh; and we prayed silently in our hearts to God, then we attacked and forced all of them outside the city walls.

Returning frequently in the cult of the Knights Templar order, Baphomet however was not the dark deity most think, and its later carnations display transformation with Baphomet final destination as the equilibrium of opposites. The half-human and half-animal, male and female, and good and evil depiction bears its arms with the Latin words Solve and Coagula. Winged the deity appears on Éliphas Lévi’s “Dogme et Ritual de la Haute Magie” making it an important figure in cosmology and the occult.

Aleister Crowley’s establishment of the mystical system in the early 20th century when he proposed Baphomet being derived from “Father Mithras”, created the hatred guide towards all atheism, occult and hedonism, discarding them as religion even though all are more and deeper attached to our earth than any of the great religions. And thus, the evolution of the God-like figure became more relevant to the Church and grew in its appeal to those in black magic and the occult. A slow transformation we tend to forget. Nonetheless the figure is still worshipped and dominantly appears in freemasonry. Its appealing symbolism deeply rooted in history the occult figure worshipped and now making its way in the world of craftbeers.

Our oven heated and bacon strips ready to enter I take my two bottles received from Spirits for Rock and turn up the volume of my stereo. Radio fragments and filmographic opening adds to the experience. Pitch black label with the horned One’s image in bloodred. Keenly embedded in the art is Behemoth’s mandatory ‘Speculum Veritatis’ sign. Nergal growls and scream, blast beats much as if Behemoth summon the bottle to be opened. It’s almost ceremonial until the song shoots into the cacophonic mid-section where the mood of the song doesn’t match the poise of the pour. The sadistic slow pour raising a thick foamy brown head as its scent starts to well and the bacon strips enter the furnace.

Bafomet pours deep brown, almost black with its texture lacing the glass while I swirl to release the rich scent. The head opens sweet and fruity notes. Little roasty coffee in the bottom of the palette. Carbonation is low providing it an almost syrupy sticky texture with chewy feeling. Thick and creamy is also its first nip.

Where Profanum and Sacrum both leaned heavily on its crisp blends, this Bafomet entices with dark tasty sweetness. Though the roasted barley and hoppy tones well into coffee-ish bitterness, the overall taste is dominated by nice sweet top-notes. In terms of balance this Russian Imperial Stout is spot on. Perfectly balancing those chocolate and coffee notes with heart-warming (ouch!) nice fragrance and refined taste of vanilla and caramel. High on caramel and sugary, vanilla, plum and cherries are swirling with notes of syrup and molasses. Remotely cafe latte comes to mind, but this ebbs subdued to the creamy roasty subnotes. Bafomet’s sweetness however dominates the aftermath of long-lasting taste tingling on your tastebuds. The beer goes down with distinct warmth and alcohol is only vaguely present.

While the oven’s alarm brings me back to the present and new music spinning, I grab the second bottle. Less chilled I pour it, enjoying a platter of streaky bacon seasoned with molasses and honey, some French cheese, and freshly baked bread. It all blends well with the typical palette of Bafomet. In the meantime, my playlist switched to Black Sabbath’s `Eternal Idol’ and I kick back to relax.

Bafomet is an enticing well-crafted beer from Browar Perun. Going against the predicted crispier path of its predecessors, this beer certainly lands higher in my top 100. It just gels extremely well and I’m especially taken by the exquisite balance presented.
This is a beer to enjoy on these long cold and dark days.

Hark! I was not, I have become
In rapture, in vengeance, in blood
From word into flesh
From man into god

Beyond all I am
Let it be known
Within my blood fire stirs
Thee I invoke, The Unspoken One

As the wolf among sheep yet cower I do not
Victorious, glorious, constantly thirsting
And as the anger fuels my heart and will
No longer fear that which feeble men fear

I, the heart ov Tiphareth is waiting
The centre and secret ov the Sun
I invoke the Sothis rites, as day and night I’m reborn
We shall all be one with the flames, from above…