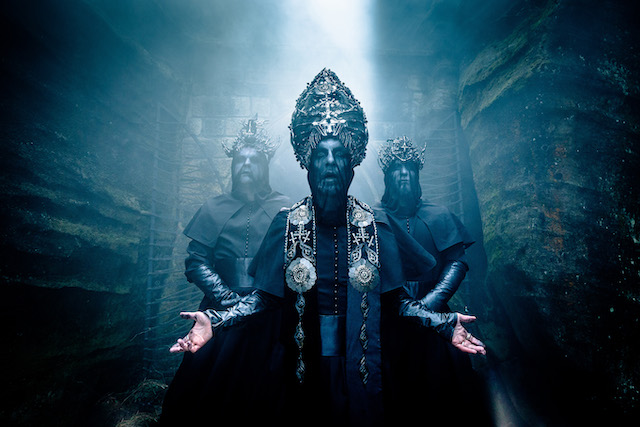 Profanum, the Latin word for “profane”. A state of profanity for those who trespass against the state of the Godly divine and all things considered holy. Religious offense and blasphemy for the non-believers. Profanum contrasting Sacrum. Black and white, like the band’s face paint. Pros and cons within Behemoth‘s following. Those who favour their debuting black metal versus their fans kneeling down to worship their experimental death metal era. Hardly middle ground found.

Émile Durkheim’s “The Sacred and Profane” dichotomy embodied in the band’s music, thrive and controversy. Durkheim’s findings balanced in Behemoth’s beers. Sacrum’s ceremonial presentation, from the previous coverage, finds a darkened counterpart in Profanum. The serene white presentation of skybound doves and the (un)holy trinity represented in the band’s occult logo, finds an evil twin lurking.

Descending into the darkest caverns of the underworld where no light reaches, Profanum is the dark water springing from one of the five underworld rivers, seeping through the overhead rock. Though the Styx is by far the most famous, Profanum beer looks more distinct to have bubbled up from river Acheron, the river of pain over which Charon carries the newly dead into the underworld. A place of healing rather than punishment, cleansing and purging the sins of us humans.

Like the water, the beer is pitch black but thin and refreshing. Cleansing the soul for a journey deeper into the dusk of the underworld. We descend into darkness… Don’t forget your coins to pay the ferryman.

“Polish darkness added to the typical fruitiness of the hops at hand?”

It was one of my statements meandering through my brain since my first tasting. Browar Perun’s craft outlived numerous breweries in the current booming craftbeer revolution with a reason. Their craft is consistent, defining and deep. Collaborating with Behemoth on the introduction of their range of craftbeers becomes more natural after having tasted Profanum. Profanum is the beer one expects rather than its unexpected predecessor Sacrum. The contrast is immense, yet the binding factor is India Pale Ale in both. Crisp and refreshing hoppiness in a glass.

The artwork is the complete opposite to Sacrum. No skybound doves, no ethereal white. Profanum is its counterpart on all accounts. Behemoth’s ‘Speculum Veritatis’ symbol (Mirror of Truth), referred to as the ‘unholy trinity’ or ‘flame of illumination’, featured the bottom of the label, now is part of the darkened art. More occult it is sided by two skulls with ramshorns. Neat is the collision of both horns pairing as the Behemoth’s majestic tusks underneath the triangular logo. Merging with the 3 radiating arrows, “The sulfur of Philosophers” empowering the symbolism of the beer’s label. Upwards lines curling from the skulls like smoke cringing, finalize label, which adds to the stygian pour in the glass.

Pouring Profanum listening to the band’s earth-shaking `Sventevith (Storming near the Baltic)’ reignites the sparks of a time long lost dwelling in darkness. When Mythology ruled and Greek Gods reigned down their rage striking fear in the hearts of believers. Darkness nesting in the beer that drips down into my glass like the drops of water from the ceiling of the underworld’s darkest cavern. While foam slowly rises, the beer waltzes in my glass.

Profanum has a beige medium foamy lasting head. The perfume of this Black I.P.A. reveals dark ale roasty tones fusing with the typical fruitiness of a Cascadian Dark Ale / I.P.A. Candied fruit dominates its nose in the beginning with black fruit (plum + resin) over wavering dark chocolate. Little roasty, somewhat sweet. It is nice and fruity, not to overpowering. Crisp and light, friendly for the nostrils.

A refreshing complex nose that contradicts with the pleasant experience of your first sip, bringing the roasted malts and bitterness of its perfume more dominantly into play. Low carbonation gives it an unexpected kick and rush that blooms with a nice bitterness. Dark chocolate, sweet but bitter. Not overwhelming, but in balance with the fruity tones adding posture to the overall deeper taste. Deeper, because Profanum leans towards a Stout in terms of taste as well as with its presentation. What makes this beer so intriguing is exactly that aspect of its taste. Not the typical Black I.P.A. fruity character. It all swirls with darker roasty notes balancing the experience.

Roasted nuts and coffee, some resin and remote plum, sesame. The coffee-ish aftertaste works extremely well with the smoked chicken wings from my semi-heated Kamado grill. It is the roast and bitterness gelling with the refreshing hoppy notes making it such a stand out beer going well with any smoky campfire BBQ. Grilled meat or smoked wings. Prime ribs, burgers or steaks… your pick! I would advise to season your meat with an Italian ‘aglio olio perperoncino’ seasoning mix. Its garlic, chili and dried onion dried spices gel exquisitely well with the meat that brings out the best in your glass of Profanum.

In the meanwhile, our first plate of smoked wings is emptied and my second bottle is uncorked. The beer drinks easily with its alcohol obscured below the roasted notes and coffee bitters. Also, Profanum is not at all heavy on the taste buds due to its refreshing water-thin structure. It’s ABV of 5.6 emphasizes that easy drinkable luster. `Pandemonic Incantations’ blasts through my speakers as the soundtrack under my guzzling making the beer the accepted booze to outlast any pandemic. Hail!

Descending into madness with a world on the verge of a narcistic breakdown. ,,In Thy Pandemaeternum” scorching as hymn to raise thy devils’ horns:

Father who shall not sell thou out for any flirt
For love, affairs, kisses of humanity
Therefore give me his darkness
Power, might, hope and fulfillment
Give me his light
It is the time for the feast of hell