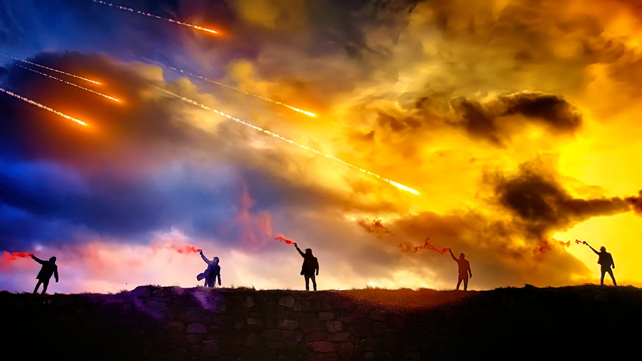 Gothenburg’s finest export of darkness Evergrey announce new album `A Heartless Portrait (The Orphan Testament), out May 20, 2022 via Napalm Records.

A NEW ERA OF EVERGREY; A DARK MELODIC MASTERY

Gothenburg’s finest export of darkness, Evergrey enters an bewildering new chapter in the band’s history with their thirteenth studio album and Napalm Records debut, A Heartless Portrait (The Orphean Testament), to be released on May 20, 2022 via Napalm Records. This overwhelming journey through progressive heaviness and searing emotionality reaches new heights and is preceded by the arrival of the soaring first single “Save Us”, in which heavy prog and melancholic beauty climax in a soulful chorus that proves Evergrey to be top songwriters in their genre!

The pounding album opener reflects everything the new full-length stands for, as it kicks in immediately with stunning guitar work and unveils a chorus sure to top the annals of Evergrey history. Listen carefully and you will hear the voices of hundreds of fans who were invited by Evergrey to send recordings of their voices to later provide group vocals for the track – making their everlasting mark on Evergrey history.

For the astonishing music video, the five-piece teamed up with longtime companion Patric Ullaeus to create a bewitching visual experience that exemplifies Evergrey.

“’Save Us’ is about us. It’s about you and I. It’s about how I see our minds becoming hostages in a world where painting optimal portraits of ourselves is more important than being who we really are. It’s about my observation of watching people around me who are feeling that they’re not good enough for the world, or for themselves. I’m afraid we’re lost, and I think we need to help each other to find our way back to what is important, to rediscover a true sense of self. As we, as artists, also contribute to content and social media as a livelihood, it’s about the paradox of being caught in a world which is hard to free yourself from. I can only wish that our music brings some balance to that equation.”

Celebrating over 25 years of metal mastery, Evergrey led by founder, singer and guitarist Tom S. Englund, are known for wandering the realms of progressive and heavy melodic metal and painting sonic renderings with their twelve studio records released as of today. A Heartless Portrait (The Orphean Testament), the follow-up to the unit’s highly successful 2021 full-length, Escape of the Phoenix (which landed at numerous chart positions worldwide), reveals a 10 track mélange of which every note, every riff and every word seeps pure poetry – creating a ceaseless intensity that mesmerizes from the very first second.

The new album was recorded at Top Floor Studios Gothenburg, engineered by Jakob Herrman and   produced by Tom S. Englund and Jonas Ekdahl, with mixing and mastering by Jacob Hansen at Hansen Studios (Volbeat, Destruction, Epica and many more), whereas the hauntingly beautiful album artwork was conjured by Giannis Nakos at Remedy Art Design. Nakos is known for creating artworks for acts like Oceans Of Slumber, Amaranthe, The Agonist and The Crown as well as merchandise for Morbid Angel, Suffocation or Cryptopsy – just to name a few.

EVERGREY ON THE NEW ALBUM

“Here it is! A new album! Yet again! This is what we love about music, it never ends! Our mission is to write music so here you are! 10 new songs! 10 new Evergrey songs that we hope you will have by your side as your life continues to shift and grow. 10 songs that we wish will be part of the soundtrack when you’re creating new memories and new possibilities in your life. 10 songs that we feel privileged to have you listen to. 10 songs that have risen through the ashes of two years where our creativity has had more time than ever to flourish.

10 songs we really hope you will enjoy as much as we did writing them. As usual we have given it our best and we can’t wait to hear what you have to say! A new year, a new album, a new record label = new possibilities. All this can only be positive, right?

A Heartless Portrait (The Orphean Testament) impresses with flawless, meticulous production that deftly depicts both heartfelt honesty and scorching metallic intensity, while its instrumental force of furious, technically driven riffs, skyrocketing solos and dramatic synths merges with the expert, brooding vocal performance of Englund – one of the most distinctive vocalists in metal. He skillfully balances harsh and heavy tones with an inarguably soulful approach, all topped by melancholic, thought-provoking lyricism that digs deeper with every spin, leaving a long-lasting impact. Songs like “Midwinter Calls”, which also contains fan participation with atmospheric audience recordings from the band’s latest tour through Sweden, and “The Great Unwashed”, draw the listener in with grooving, glistering instrumentation, flowing between boisterous dynamics and a next level vocal performance, while emotive “Wildfires” turns the volume down as a goosebump-worthy ballad that hurts and heals all at once.

“Call Out The Dark” begins atmospherically with accented keys, suddenly evolving into an intense opus of symphonic and power metal attributes in the blink of an eye, whereas the record’s longest track, “The Orphean Testament”, impresses by revealing its heaviest facet. A sensitive introduction lures the listener into “Heartless”, and offers one of the album’s most engaging verses, followed by a hauntingly beautiful chorus and variety in pace to create a magnificent listening experience.

4. Call Out the Dark

A Heartless Portrait (The Orphean Testament) is a striking testament to the fact that while the Swedish five-piece doesn’t need to prove anything to anyone at this phase, they still impressively showcase that, after over 25 years of existence, their creativity sees no bounds – dropping yet another sensation within their impressive catalog!

Fans can  look forward to seeing Evergrey live, as in 2022, the powerhouse will go on an extensive tour through Europe!