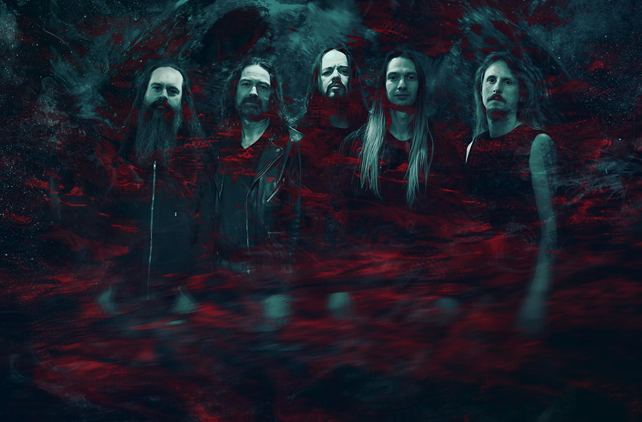 A HEARTLESS PORTRAIT (THE ORPHEAN TESTAMENT)

After breaking the charts worldwide with Escape of the Phoenix (2021), Gothenburg’s finest export of darkness, Evergrey enters a bewildering new chapter with their new album, A Heartless Portrait (The Orphean Testament), out May 20, 2022 via Napalm Records.

With the previously released, pounding album opener “Save Us”, Evergrey lifted the curtain on an overwhelming journey through progressive heaviness and searing emotionality. Today, glistening second single “Midwinter Calls” draws the listener further into this multifaceted world of sound with its grooving instrumentation, flowing between boisterous dynamics and a next level vocal performance by mastermind Tom S. Englund – one of the most distinctive vocalists in metal. The powerful track gleams with its melodic tunes and guitar riffs and marks just one out of many highlights of the new epos. The song features atmospheric audio recordings from the band’s latest tour through Sweden, giving the song a special effect and fans another opportunity to leave their everlasting mark on Evergrey history.

“Midwinter Calls” is visually brought to live via a sophisticated, cinematic music video, filmed by Patric Ullaeus and conceptually connected to the storyline portrayed in the “Save Us” video, allowing the viewer to jump even deeper into the universe of A Heartless Portrait (The Orphean Testament).

“‘Midwinter Calls’ is the second song but also the second chapter of a three-video story that reveals itself in a reverse order, why make it easy huh?

This song is full of energy and it’s once again featuring our fans and the live audience of Gothenburg, Stockholm and Karlstad – Co-creating at its best!  We can’t wait to hear the whole world singing along to this when we play it live!

Hopefully you will find the video both thought provoking and uplifting at the same time. What is important, who are we and why? The resistance is getting real!”

A NEW ERA OF EVERGREY: A HEARTLESS PORTRAIT (THE ORPHEAN TESTAMENT) IS DARK MELODIC METAL MASTERY!

Celebrating over 25 years of metal mastery, Evergrey, led by founder, singer and guitarist Tom S. Englund, are known for wandering the realms of progressive and heavy melodic metal and painting sonic renderings with their twelve studio records released as of today. A Heartless Portrait (The Orphean Testament), the follow-up to the unit’s highly successful 2021 full-length, Escape of the Phoenix (which landed at numerous chart positions worldwide), reveals a 10 track mélange of which every note, every riff and every word seeps pure poetry – creating a ceaseless intensity that mesmerizes from the very first second.

The new album was recorded at Top Floor Studios Gothenburg, engineered by Jakob Herrman and   produced by Tom S. Englund and Jonas Ekdahl, with mixing and mastering by Jacob Hansen at Hansen Studios (Volbeat, Destruction, Epica and many more), whereas the hauntingly beautiful album artwork was conjured by Giannis Nakos at Remedy Art Design. Nakos is known for creating artworks for acts like Oceans Of Slumber, Amaranthe, The Agonist and The Crown as well as merchandise for Morbid Angel, Suffocation or Cryptopsy – just to name a few.

EVERGREY ON THE NEW ALBUM

“Here it is! A new album! Yet again! This is what we love about music, it never ends! Our mission is to write music so here you are! 10 new songs! 10 new Evergrey songs that we hope you will have by your side as your life continues to shift and grow. 10 songs that we wish will be part of the soundtrack when you’re creating new memories and new possibilities in your life. 10 songs that we feel privileged to have you listen to. 10 songs that have risen through the ashes of two years where our creativity has had more time than ever to flourish.

10 songs we really hope you will enjoy as much as we did writing them. As usual we have given it our best and we can’t wait to hear what you have to say! A new year, a new album, a new record label = new possibilities. All this can only be positive, right?

Get your copy of A Heartless Portrait (The Orphean Testament) (out May 20, 2022, via Napalm Records) HERE