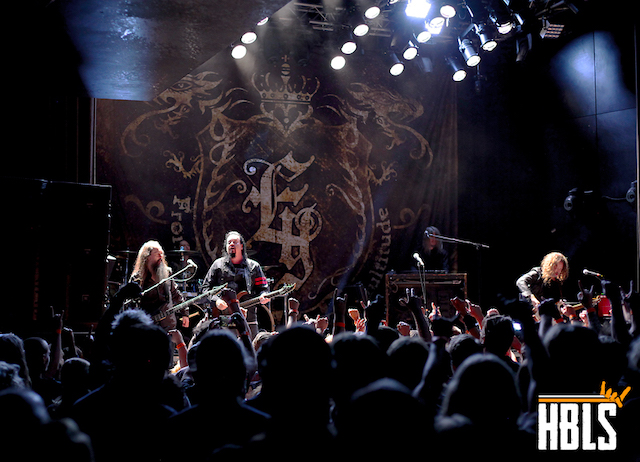 The Swedes reigned during the triumphant opening night of this European 2022 tour. With a setlist build on the foundations of the last 3 releases, they worked through a rock solid and heavy set of songs many will kill for. The famous Eindhoven venue literally trembled and shook on its foundation due to the ponderous domination of Jonas Ekdahl’s and Johan Niemann’s interaction. Their dynamic backbone provided is brutal and propelled the band tonight.

No less than 11 out of the 14 tracks performed hailed from their last 4 albums, with focus on their new album `A Heartless Portrait’. The rousing ,,Save Us” as set opener was spot on and immediately set the standard for tonight. The outcall-chorus “(Hey) Save Us!” raised fists front to back, with the entire audience calling out as confirmation of appreciation.

Tom Englund and Henrik Danhage’s guitars swamped in the ponderous droning mix during the first 2 songs as the only minor focal points of the evening, with the issue resolved during ,,Weightless”. The spirit of their songs is unprecedented. Impressive ponderous bass and drums, chugging riffs and wonderful solos emphasize the craftsmanship of Evergrey. Gradually the sound clears and opens for the dynamic interchange of Danhage and Englunds impressive riffs, nesting harmonies and wonderful soloing. Their interaction is excellent, swapping duties constantly. Danhage channels his battering riffs and virtuoso solos with arena rock pretentions, not taking to the spotlight often. Subdued as a performer, the guitarist is one of the cornerstones of the potent ferocious sound of Evergrey (and entire genre), and his interaction with bandleader Englund remains astonishing.

More dominant in his presence, Englund takes the helm constantly, emitting his outlandish riffs and power chords. Tom also is the perfect frontman pouring his heart out. Emotive he packs the right amount of tone and well dosed power, meanwhile being the expressive force for fans to relay to. The interaction is warm and his personality radiates. Enthusiastic he maintains interaction with the audience, seeks contact with the front rows, stretches his arms to warm the atmosphere for the rest. Eye contact is kept with the rest of the band, as he parades the stage.

THE POWERFUL FORCE OF EVERGREY

Pasting the sound solid, Zander’s keys push or intensify the songs when needed, or add profound notes and intricate piano swirls to make the colorize the all over heaviness. ,,Distance” opens with his daunting signature piano strokes and haunting ominous ‘pushed’ phrasing over the low growl of Niemann’s power packed bass line and the roaring chords. The welling power of the song eludes in the withering chorus with Tom’s moaning hoarse vocals stretching and eluding emotion. Voice and keys are dominant with sound effects thrown in for the breakdown of the song. ,,Eternal Nocturnal” bursts into action discharging its fervour energy, rolling into the equally dynamic ,,Midwinter Calls”. The song’s chants are glooming and enhance Tom’s gritty mid-range roars. The despair is heartfelt as he raises his arms and eyes to the heavens during the soaring pre-chorus, tapping the most vulnerable spot in his voice. So powerful….

,,Where August Mourns” sets off with Ekdahl’s powerhouse drumming, switching to more subtle nuances. The off and on of reflective reverbed notes unloaded by Niemann is insane, especially during the song’s fervent lift offs. His playing is as versatile as both guitarists’ delivery, laying down impressive melodies in his playing. Throbbing droning bass notes reoccur constantly and dominate the mix, that has established itself and is loud but subtle in its distinct moments. It makes the show enjoyable, even with my ears plugged preventing the loudness from impairing my hearing.

THE GUITAR SOLO OF HENRIK IS FIERCE

Sonar pings announce the downright impressive prog metal onslaught of ,,A Silent Arc”. One of my favorite songs holds up firmly performed live. Combusting with its insane time changes and Jonas’ blasting tribal dynamics, it spits fire. The guitar solos are pitching melodic, in the best shred tradition. Rikard injects the right dose of lush keyboard and piano swirls, with sound effects and fragments of the narrative distantly echoing, to delve into another trade off of solos between Tom and Henrik. Insanely powerful is progresses, to make way for a breather as Englund and Zander gear up for the emotional ,,In the Absence of Light”.

Timid and powerful Englund finds the poignant tone to inflict painful remorse in the song. Intensifying roaring bass line and tasteful keys slowly power up towards the powerful execution of the chorus, welling with power. Danhage’s plucking delayed notes suddenly erupt in a scorching fierce solo full of overdrive, with drum and bass battering, riffs growing in force.

The following ,,Call out the Dark” blends Englund’s impressive clean hooks with Danhage’s sterling melodies and lead parts, with a dizzying variety of tapping and shredding. The song matches its predecessor’s tenure while raising the pace towards the high paced ,,My Allied Ocean” with its scattering riffs and progressive metal drum drive. Announcing the last song of the night, Evergrey finally delves in their impressive past with crowd pleaser ,,A Touch of Blessing”. More pummeling on stagnant beats and welling melodic guitar accolades, the song makes a perfect kicker for more.

The short off-stage moment is succeeded with a trio of songs kicked into gear with the wonderful live puncher ,,Blindfolded” and surging oldie ,,Recreation Day”, with its towering staccato solo offload. The brooding atmosphere, and audience celebrating the band’s triumphant return to the stages is topped off with by the absolute hammering and exhilarating ,,King of Errors”. Marching beat, waving flags, and chugging guitars well before the anthemic chorus pitches up. Evergrey digs deep to with their interplay and emotional stir tonight. One final bow remains with a meanwhile mandatory crowd picture with the band for their socials, and the band soon enough meets up with their fans in the lobby.

Save Us
Weightless
Distance
Eternal Nocturnal
Midwinter Calls
Where August Mourn
A Silent Arc
In the Absence of Sun
Call Out the Dark
My Allied Ocean
A Touch of Blessing
Encores:
Blindfolded
Recreation Day
King of Errors

Arriving belated, we walk into the packed venue as Virtual Symmetry leaves the stage, bummer!

After a short change over Fractal Universe takes the stage. Limited playing room, the band works through a solid setlist mashed up from their 3 full length albums; the new `The Impassable Horizon’, `Rhizomes of Insanity’ and `Engram of Decline’. The band’s insanely progressive death metal is celebrated by the audience. Heavy blast beats are fired upon us with tempo changes putting you off constantly. The guitars are heavy in the mix, and run point in the offload of crushing riffs and memorable hooks. Hugo Florimond ferociously bangs his head and exchanges riff monsters with singer/guitarist Vince Wilquin. His load grunts and roaring power vocals switch with his melodic voice for the band’s complex melodic choruses. The variance is impressive and the band lures in the audience.

Impressive is the discharge of hooks and melodies in ,,Interfering Spherical Senses”. Spectacular is ,,The Impassable Horizon” most experimental track ,,A Clockwork Expectation”, build on extremely odd time changes and poly rhythmic breaks, the song flourishes with clean vocals and angular chords draped along the blunt riff offload. The song works like a charm, revealing the band’s wide scope of styles implemented. Jazzy runs with avantgarde interplay and volatile structured lush fickle are injected in the doom of power that gushes from the stage. The sonic palette is explored with the swinging grooved ,,Fundamental Dividing Principle” with its feverish poise of grunts, and ,,Oneiric Realisations” that packs jazzy chord progressions and acoustic passages which are just wonderful.

All contradicts with the (almost) calming throb of ,,Flashes of Potentialities” with its offset of calmness and urge, demonic grunts and subtle vocals bellowing in its enticing chorus. It is impressive to see how Fractal Universe’s intricate structured songs hold up live.

Though the band somewhat feels out of place on this bill, but manages to grip momentum and attention while executing their intense musical diversity. Stuck on the smallest of operating spaces, the kick out an impressive set celebrated by a large part of the audience.