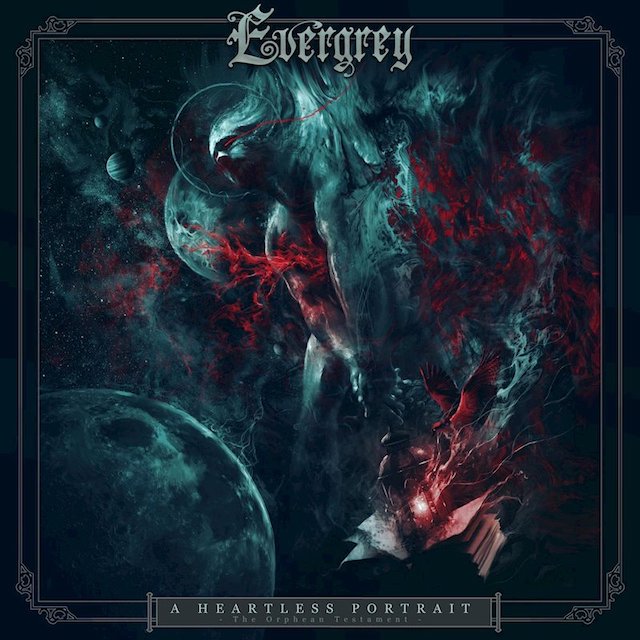 “This overwhelming journey through progressive heaviness and searing emotionality is repeatedly accented by sonic melancholy and gripping lyrics – leaving the listener speechless and re-cementing the Swedish five-piece at the top of the scene without a shadow of a doubt”, screams the headline of the bio accompanying the band’s first release on Napalm Records. They are not far off, as one can imagine. Evergrey’s 13th album entitled `A Heartless Portrait (The Orphean Testament) celebrates their 25th anniversary and is an album featuring the classic Evergrey ingredients. It is bold and dark, deep and intense. A testament from a band that never lets down seizing the upwards spiral since their debut.

BACK TO THE EVERGREY TRADEMARK

The above being said, I certainly was amazed by the course of the album. Its predecessors `The Atlantic’ and `Escape Of The Phoenix’ took a fierce direction with pondering power and tremendous bi, somewhat straying from the benchmark. Refreshing and deliberately heavy marking the direction taken since `The Storm Within’, they moved their creative beacons exploring sonic new horizons.

`A Heartless Portrait’ sees the band return to form, gripping back to the trademark ingredients of their elusive catalogue. Injecting that scorching heaviness well dosed and blended with the melancholic and more dominant keyboards to well with pompous power. This modus operandi is showcased on the aggressive opener ,,Save Us” which makes future and present collide with blazing pretentions. Propelled by a panzer-heavy riff the song fuses towering rousing (fan) chants with Tom’s melancholic and aching vocals and howls, spawning despair. Razor sharp is the song’s solo taking us into a turbulent progressive section displaying Dr. Ekdahl’s intense dynamic drumming fused to Niemann’s energizing enigmatic bass playing.

Buzzing riffs and ominous keyboards are the tarnished bodywork to which the epic ,,Midwinter Calls” is crafted. Held firmly together by its turmoil and razor-sharp riff and drums, the song ebbs and wells with sweeping emotion, empowered by the echoing chants and Zander’s dominant pumping keyboard swirls. Again, the song blooms with appealing hooks and nesting melody with guitars firing their high-octane interaction. The song’s breakdown is bold and powerful with embellishing chants. Bringing their classic sound to the plate in ,,Ominous” Evergrey taps the melancholic deep vein. Vocal effects add to the spitting stop ‘n go drum patterns while guitar tandem Danhage and Englund exchange low end riffs and solos.

It’s an emotional ride taking us into the roaring emotional ,,Call Out The Dark” displaying Tom’s grandiose feeling for drama, belting an impressive job. Its pitching solo exchange adds to the grandeur of this goosebumps evoking power hymn. Enhanced with slightly industrial tinged keys, the song reveals technical variety. Leaping into the urging ,,The Orphéan Testament” the band blends the intense melodies and welling melancholy with urging musicianship with heavy riffs and double kicked bass drums frequently repelling. Placed in the middle of the epic action, the listener is administered impressions and emotions by the dozens. Overall present is an ominous and sacrilegious density.

,,Reawakening” takes all of the above and governs a forceful drive that gracefully rolls forward over Englund’s defining vocals. The flow of the track is ridiculous, not losing its impressive melodies over the combusting strife. This potion is shaken up for ,,Heartless” with dominant melancholy and dark welling emotions. Both songs have tremendous appeal filtering the band’s typical sound.

Englund again displays his articulating strength as a vocalist on the lush ,,The Great Unwashed” which frequently reverts to the album tittle. Industrial gothic-tinged keys are desolate in its delivery. The melody is pitch perfect, flowing and sweeping. A middle eastern scaled riff full of reverb washes into a graceful solo pitching upward with fretboard magic. Notes fired and arpeggios unloaded onto the listener it suddenly dips down resurrecting the metal solo. Englund and Danhage are the undisclosed champions of the craft when it comes to guitar interaction, in both, exchange of riffs and back-to-back soloing. There’s a fluence in interaction and contradiction in styles and tone making the potion intense and adding diversity to the plate.

Taking everything to the next level on their current video single ,,Blindfolded” with enormous walls of welling keys underneath progressive guitar riffs bouncing off of Jonas’ insane polyrhythmic profound drumming, Evergrey display their intensity and thrive. Drawing from the most intense of registers Englund adds with anger-laden vocals and roaring outbursts. Breaking into a keyboard section, the song displays the band’s insane ear for crafting intense structures as a carcass to uphold the tarnished melodies and hooks. Flourishing as a progressive sonic spectacle the song oozes conceptual epic meandering detail and flagrance. Fist pumping to the end this is a live track per se.

Making the album die out with grace ,,Wildfires” rifts from the previous 9 songs presented. Acoustic, timid and depressed, with Englund spotlighted, it drops the turbulent magnitude of the album, and certainly is a welcome breathing moment before hitting the ‘replay’ button.

A ROLLERCOASTER OF EMOTIONS

`A Heartless Portrait (The Orphean Testament)’ would have fluently followed `The Storm Within’ as a release, to rise from its shrouding dark shadows with grandiose defying tracks. Injected with the scorching metallic elements from the previous two albums, the album makes their heavy sound collide with their most brooding atmospheric soundscapes, in the best Evergrey tradition. More cinematic than ever before it enrols in drama. Running by like an engaging tragedy it builds in action and excitement, as well as it drops in tone to dense and melancholic dark frailty. The entire emotional specter is presented with Evergrey firing on all engines. ,,Midwinter Calls” and ,,Blindfolded” raise the bar once again, to towering magnitude orbiting the band. `A Heartless Portrait’ is a rollercoaster of emotions which will take you on an endless journey exploring.