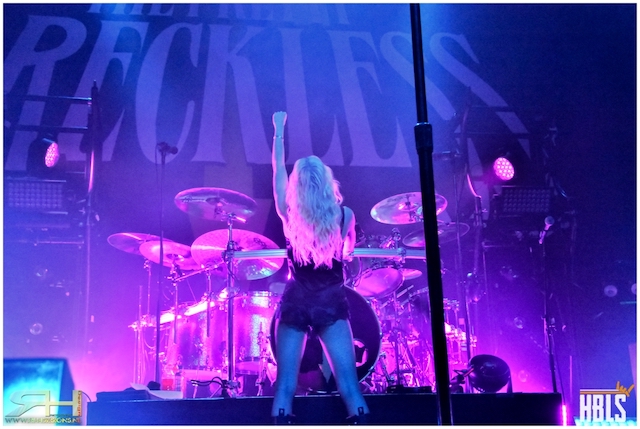 November 14, 2022 by Raymond Helebrand - More about our team

Last Monday, after 5 years, it was finally time for The Pretty Reckless to perform on Dutch soil. The well-known Venue 013 in Tilburg has been sold out for quite a long time, just like many other places where the band played during their recent European tour. I think that says enough about how popular this band is. In addition, with `Death By Rock And Roll’ [2021], they have yet another strong album in their pocket to support live on the road.

I was very curious how the band would sound live and what the atmosphere would be like during their show. When I arrived in Tilburg around 4.30PM [when I’m there I always take the time to enjoy the city and to have some food and drinks], I already see a long queue of fans that is formed at the entrance of 013. One that would only get longer. Much longer!

Once the venue opened at 7PM the fans slowly started pouring into the hall. By the time the lights went out for the start of opening act The Cruel Knives, the venue was already filled by a lot of music enthusiasts. These British lads gave away an energetic show and managed to get the crowd going. Personally, I found the band’s music style a bit disjointed. Sometimes it had heavy guitar riffs and banging drums and seconds later it is like I am listening to a post-grunge band.
The audience seemed to be enjoying it and that’s what matters the most in the end.

SETLIST OF THE CRUEL KNIVES

After the change over, it was finally time for The Pretty Reckless to take over the stage. The hall was now filled to the roof with fans and actually I can talk about it long or short, but: The Pretty Reckless came in top form and the venue exploded as soon as the first notes of opening song ,,Death By Rock And Roll’’ were played. The sound was good and the band seemed to be having a good time.

Singer Taylor Momsen proved, once again, that she is a more than talented vocalist and not a fallen model, or ex-actress who also sings a tune or two on the side. Absolutely not! Since The Pretty Reckless’ inception in 2009, it should be more than obvious that it’s not just about being beautiful. Her motivation is clearly the love for music and we got proof of that tonight. In addition, she has managed to form a steady and solid band around her in the characters Jamie Perkins [drums], Ben Phillips [guitar] and Mark Damon [bass].

It may be clear that this four piece simply belongs to the top of the hard ‘n heavy/ post grunge/ alternative rock movement. The bandmembers know how to give away a wonderful live show, without being helped by all kinds of visual tricks such as pyrotechnics or visuals. The Pretty Reckless are next level performers who display skills and flexibility, both musically and lyrically, which most of their peers can only aspire to.

No nonsense, just take the stage and perform a great rock show. Let the music speak for itself and keep the audience in a stranglehold until the last notes fade away. Personal highlights of the evening were the performances of ,,And So It Went’’, ,,Witches Burn’’,  ,,Going To Hell’’ and ,,Heaven Knows’’.

Let’s hope The Pretty Reckless doesn’t wait another 5 years before hitting a Dutch stage again, because this show just makes you hungry for their next concert. In any case, I am glad that I took the time this Monday evening to be one of the more than 3.000 witnesses of a great show. And actually, I hope that singer Momsen will no longer be seen as a visual piece of candy from now on, but that she will be honoured for the talented singer, figurehead and front woman of The Pretty Reckless, because that’s what she is.

Death By Rock And Roll
Since You’re Gone
Only Love Can Save Me Now
And So It Went
Make Me Wanna Die
Miss Nothing
Just Tonight
Witches Burn
My Medicine
My Bones
Going To Hell
Heaven Knows
Take Me Down
Encore:
Fucked Up World