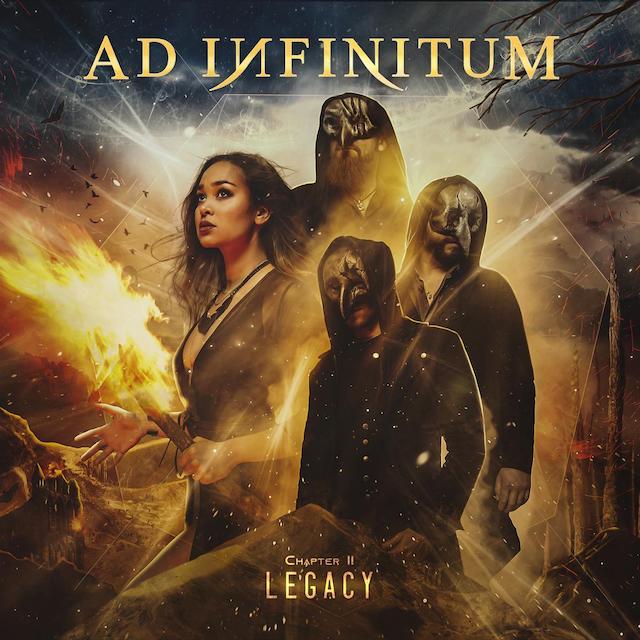 Multitasking singer extraordinaire Melissa Bonny reports back with her main band to deliver the 2nd chapter of Ad Infinitum with `Legacy’. Following the brutal melodic mayhem on its predecessor `Monarchy’, this is an album to look forward to.

`Chapter II – Legacy’ is more melodic and appealing to fans of the genre perhaps. Bonny is singing better than ever and all tracks are tailor cut to her performance. Highly symphonic the tracks tower with sublime melodies and drive. Keys are added in the back with guitars driving the songs. Progressive drums propel and choruses are dynamic and nesting, even though the album needs to grow on the listener.

More than once their music reminds us of Kamelot’s epic haul with Nightwish’s cinematic ingredients. It all gels very well and every spin of the disc flies by.

,,Reinvented” and ,,Unstoppable” open in this classic symphonic tenure before Bonny breathes life into the impressive ,,Inferno”, which contradicts from its grim title. Expecting it to shoot into oblivion, the song is an impressively crafted cinematic prog epic bordering with pop.

,,Your Enemy” increases dynamics with drums dominating the progressive sections before Bonny takes over to run point. Scattering bass lines and chugging guitars subdued to the nesting melodies, make it an impressive tune. ,,Animals” dramatized by commanding keyboard swirls and string arrangements, reveal Ad Infinitum’s fine-tuned feeling for drama and melody. Though very slick and polished, the edge is provided by buzzing riffs and frontal guitar melody. ,,Into the Night” is a potential live cracker with intense progressive interaction and ear mingling chorus. A fist pumper per say. ,,Lullaby” has a stop ‘n go motion and melodic intense melody suddenly shooting into orbit over the grunts of songwriter and guitarist Adrian Tessenvitz. It is perhaps the finest track on the album making their melodies and drama collide with the unwithheld poise of the debut.

,,Breathe” hits the breaks and lingers onwards. Slightly predictable with Bonny ensuring it not to break. An impressive solo adds to the pleasure. This guitar extravagance also colours the opening of the driven ,,Haunted”, the first song that truly follows the line of the debut. More powerful and diverse it enrols with Teutonic drum ‘n riff interaction while colourful guitars hoover on. But it is Bonny putting her mark on the track(s), the same she does on the genre-typical ,,Son of Wallachia”.

Even though Ad Infinitum and Bonny gained momentum, with a more polished and clean sound, the album is not the expected high roller follow-up expected. Where the band spit fire and strayed from the mainstream of bands in the genre, `Legacy’ fits the classics of the genre. Openings of tracks all start with the same tension building short fragments, making it predictable. Bonny adds enough panache to make Thessenvitz’ epic tracks shine brightly, but overall, it doesn’t live up the high expectations. Less predictable than most, but does not manage to elevate the band like their debut.