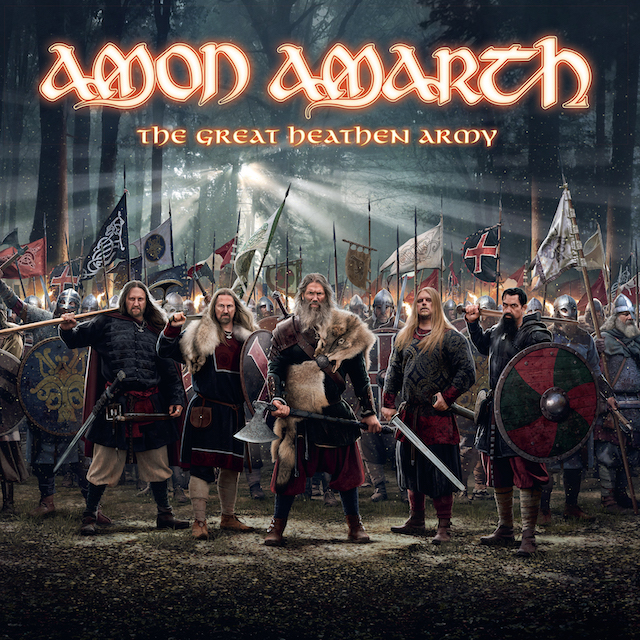 With `Berserker’ topping the international heavy metal charts and global tour on the way, Swedish Vikings Amon Amarth’s berserk days on the road came to a grounded halt. As Hegg himself stated recently: “We thought Fuck it, there’s no point in going back on the road with an old album (`Berserker’), so let’s just start working on new stuff instead…” summing up the stance of their brand-new `The Great Heathen Army’. The album is the typical Amon Amarth record, with large and loud metal hymns, but it also taps a different vein. Exploring the esoteric aspects of the renowned Viking culture and lifestyle that Hegg’s wife Maria brought in, it also heads into uncharted terrain extracting fierce squall and fury from the broadest horizon to position in the front of their newest iconic metal hymns.

THE DEEPER RITES OF VIKINGHOOD

Shooting root in the rivalling times of the Viking era, the songs also see the esoteric realization of the above-mentioned deeper rites of Vikinghood. It rolls in motion with a rousing roar on the opening ,,Get in the Ring”, fusing the traditional fist raising pump of their sound with Hegg’s intense roaring vocals, and rousing upbeat. Bolt Thrower’s vibe is present and the downright hostility and anger laden vocals are off the wall. Double bass rolls forward with plundering trend as breaks injects poise. Mikkonen and Söderberg’s guitars duelling in fine form, unpacking the demanding riffs and intense solos and melodies. Subtle keys are added, creating a musical standoff. The song whales with anthemic overhaul and post-apocalyptic Viking abundance. “You lie to me through your teeth. Then you talk behind my back. You think I’m blind that I don’t see, the mask you wear begins to crack!” Snarls Johan.

Inspirational is the ravishing title track with its gut drawn growls and towering loud vocals. Wallgren’s rolling drums, combined with the persistent basslines Lundström lays down deliver, while a reoccurring guitar melody scatter echoing over the desolate wasteland depicted. Very much one of the darkest Amon Amarth songs of the last decade, and reminiscent to ,,Surtur Rising”.

It is there where ,,Heidrun” explores different territory with its narrative and pummelling folk strut. Very folkish and heavy on vibes. There’s a cinematic ting with a danceable beat and swing raising the horns. One for the Wacken campground for sure, with the BBQ blazing and beer pouring. More of the new élan shining comes with the melody drive in ,,Skagul Rides with Me”, morphing constantly over its enchanting melodies and rolling drums. The song’s evolution is refreshing, yet very Amon Amarth.

High power grenades exploding are the intense ,,Odens Owns You” with its ravishing pace and scattering splash cymbals, and the battle call of ,,Dawn of the Norsemen” that pulls forward with power and guitars discharging memorable melodies and riffs. It is the explosive cocktail extracted from their catalogue that gets injected turmoil at divine pace. ,,Saxons and Vikings” injects more urge and torment in its musical delivery, with infectious double bass over the rousing outpours of agony and anger. Rip-roaring, firing up high with impressive hooks and melodies. Insane vocal interaction of Hegg’s gutted loud powerhouse roar and Saxon’s Biff Byford’s echoing hollowed power chops increase the cinematic appeal and add an extra dimension to the song-title. It could be a returned favor after Johan’s vocals being added to Saxon’s 2018 ,,Predator”, but it sure as hell combines forces perfectly, and makes me wish for more.

Marching into battle ,,Find a Way or Make One” fuses its revolting rousing stance with a strong vocal stride and reverbing melodies. The songs mythological narrative revolves around the obstacles faced in life once commenced into battle, inevitably transferred onto the recent pandemic, the song takes shape with deeper content. Peeling down the story of The Heathen Army invading England in 865 AD, raiding the town and villages, it reveals layers of deeper meaning. How the English overcame the barbaric army in a fight about life or death is pretty much how mankind prevails. Hammer track!

Closing the album in style Amon Amarth delves deep on the ethereal and mythological rousing ,,The Serpent’s Trail”. Large drum beat march it into action with Hegg singing melodic narrative vocals before gutting his roar. Bass is sturdy and pulsates under the melodic deliverance of both guitars. Colossal hooks and fist firing riffs unload this musical spectacle. Fine melodic toning adds to the cinematic appeal of the song, that is downright memorable. Musically pasting the picture for you on the hillside on a misty morning with the mountain towering over the cringing mist where you see the devil’s trail you have to embark on.

Pulsating beat and breaks, subtle melodies and exchanging solos, are building gradually towards the returning dark narrative before diving off the cliff for a harsh overload of Viking fierce anger blazing. Fading out with remote wavering melodies, the song is epic and has you call for replay.

Much like Arch Enemy, Amon Amarth has created their own unique subgenre, gathering followers. They are the benchmark for their genre and redefine the outer markers with every album released. The drive and thrive of the Swedish Nordmen is as explorational as their ancestors sailing into glorious battle, to the far outposts of the flat earth. Not falling off its edges, they kept expanding their tribes and kingdom, as much as Amon Amarth keeps expanding their fanbase and discography. Going for the throat Amon Amarth celebrate their return to form for the Vikings.

Needless to say, that Amon Amarth add to the experience and lifestyle of metalheadz and Viking-clans with the release of a deluxe set consisting of the new album, a puzzle, patch and trading cards, as well as a bottle topper to top your opened bottle of Amon Amarth Sköll Imperial Porter! Unfortunately, it will not fit your bottles of Amon Amarth Underberg.

Alongside the standard cd and vinyl edition, the band will also have `The Great Heathen Army’ find your record player in slick dried bloodred marbled vinyl, fur off white marbled, clear smoke, and blue and black marbled, a navy-blue vinyl, as well as a cassette-tape. Vinyl editions come in limited quantities of only 666 units made. Collectors dig in there…