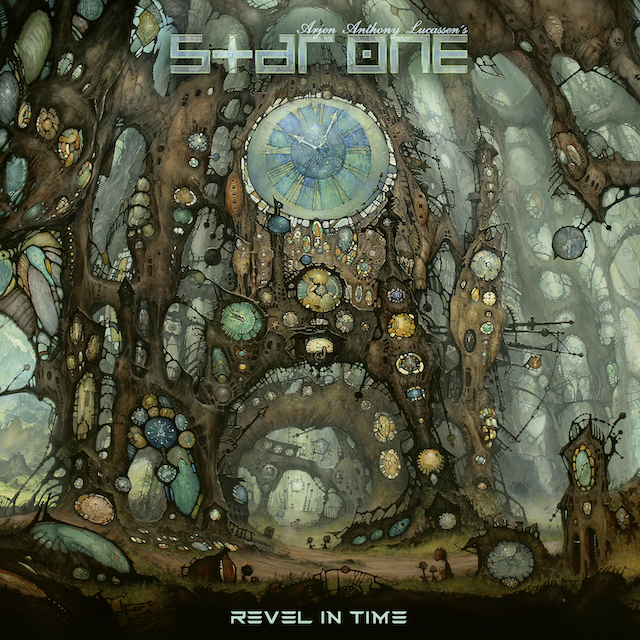 The Star One project of Mister Ayreon, Arjen Anthony Lucassen has been resurrected again after a hiatus of some eleven years. ‘Space Metal’ (2002) and ‘Victims Of The Modern Age’ (2010) were a different cup of tea in comparison with the Ayreon chapters, but both albums are being seen as masterpieces on which Lucassen explored his more heavy side. On ‘Revel In Time’ he once again shows that he is a rocker at heart.

On ‘Revel In Time’ Arjen Anthony Lucassen rocks his socks off. In the past he only used four singers (Floor Jansen, Dan Swano, Damian Wilson and Sir Russell Allen), whose voices would be combined together throughout the songs. This time the formula is quite different. Lucassen chose to have each song tackled by a different singer, obviously giving a spot to the above-mentioned singers but he added some other names to the mix like Joe Lynn Turner, Brittney Slayes (Unleash The Archers), Crobot’s Brandon Yeagley, John Jaycee Cuijpers (Praying Mantis), Roy Khan (Conception/Kamelot), Jeff Scott Soto and several others.

While preparing the album Arjen Anthony Lucassen came to the conclusion that several songs that had guide vocals were so damn good that he decided to make it a double album, as he wanted the songs in their alternate state to be heard as well, so even some more singers like Tony Martin, Alessandro Del Vecchio and Will Shaw (Dead Risen) were added. Female singers Irene Jansen and Marcela Bovio who worked with the magician before came in as back-up singers with Marcela ending up doing a song by herself.

In total some 30 people have worked on this musical adventure. With Lucassen providing guitars, bass and keys plus some vocals as well (he takes the lead on the alternate version of ,,Today Is Yesterday’’) also Ed Warby made a return to the studio delivering maybe his best work he ever did on drums. Man, if you hear the foundation that Warby and Lucassen have laid down for this record, it is at times shaking the earth quite profoundly. Although he could have provided all the guitar solos by himself easily Arjen invited some really big names to add their talents to the mix.

Steve Vai, Michael Romeo, Joel Hoekstra, Kayak’s Marcel Singor, Delain’s Timo Somers, Ron Bumblefoot Thal and last but most certainly not least Adrian Vandenberg, all these dudes have contributed. And some keyboards magicians like Joost van den Broek (the right hand man for Lucasssen on his Ayreon projects), Alessandro del Vecchio and Jens Johansson have put their parts in. All in all, a very impressive gathering of talent but let us be frank here, we did not expect anything else, did we?

As he has mentioned quite often in interviews Arjen Anthony Lucassen is a film freak with sci-fi movies as a possible favourite. The other two Star One albums were inspired by movies like for instance ‘Alien’ and also ‘Revel In Time’ has songs that are inspired by movies and contains tracks that are dealing with some sort of manipulation of time. The musical direction that we are dealing with is a mix between progressive rock and metal with a foundation that is created from pure concrete. It is obvious that the songs have the tendency to be moody at times, a bit of bombast is there as well (especially in the power choirs) and variation within the songs is key.

The prime example is ,,Lost Children Of The Universe’’. On CD 1 Roy Khan sings this monster piece of almost ten minutes, on CD 2 (same songs, different singers) with the alternated versions mister Tony Martin puts his mighty voice into battle while Steve Vai takes care of the breathtaking solo for this track. At the beginning of the song, I almost thought that the late great Jon Lord had come down from heaven to put his typical organ sound into the mix. With the power choir at hand this is a outstanding sort of rock opera piece of its own.

I am not really a fan of reviews where every single song is being dissected to the bone, so I am not going to do that for ‘Revel In Time’, because this is a discovery. I consider this piece of art to be ‘your journey’. You should discover for yourself what this is all about, as there are so many things and details to encounter. I am absolutely stoked with ‘Revel In Time’ and each time I hear this record it is an adventure as I stumble onto new things and elements.

I would like you to do/undergo that journey as well, taking your time and discovering the art and beauty of this carefully crafted material. As per usual there are several different versions available, varying from a super Deluxe 3 CD version (plus Blu-Ray) to a 2 CD LTD Digipak and obviously vinyl. It might set you back a bit in Euros, Pounds or Dollars but ‘Revel In Time’ will be worth every cent you invest. A masterpiece, no doubt whatsoever.