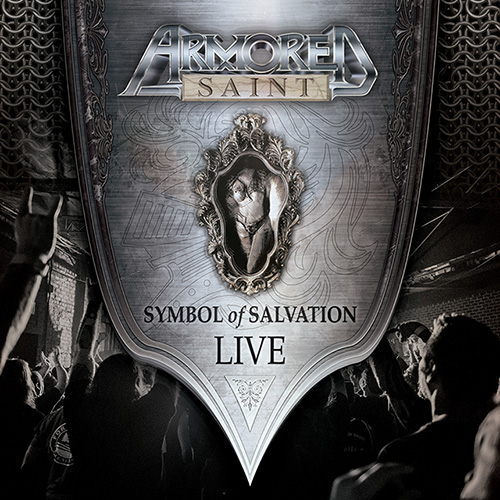 It is always exciting to hear Armored Saint in action. This band is one of the few that always stayed true to melodic heavy metal and never ever gave in to trends. That might be one of the reasons that singer John Bush, bass player Joey Vera, drummer Gonzo Sandoval and the guitarists Phil Sandoval and Jeff Duncan never made the large breakthrough like Metallica, Anthrax, Slayer and Megadeth did but the band always made music for the fans. By the fact that they are still around after so many years proves that they are appreciated and wanted. Mind you their latest studio-albums ‘Win Hands Down’ and ‘Punching The Sky’ were of top notch quality.

While preparing in 1989 for their fourth album ‘Symbol Of Salvation’ Armored Saint was hit hard with the news that founding guitarist Dave Prichard was diagnosed with leukemia. After Dave passed away at the very young age of 27 on February 28, 1990 the band decided to carry on in his honour. ‘Symbol Of Salvation’ became a stellar album and a while ago the band celebrated the existence of the album with a show in Gramercy Theatre in New York. Cameras were rolling and the band played the entire album. While writing this review I have not seen the whole footage (saw a few songs on the bands website) as my copy of the CD/DVD that I ordered is still floating about somewhere between the USA and Western Australia. But hearing the music already tells the bulk of the story.

Armored Saint has delivered an upbeat show, full of fury and energy, led by the soulful and slightly smoky voice of John Bush. The atmosphere and performance can be described as super intense, Duncan and Phil Sandoval are duelling constantly and the song material played on this evening offers nothing but pure satisfaction. ,,Symbol Of Salvation’’, ,,Spineless’’, ,,The Truth Always Hurts’’, ,,Reign Of Fire’’, ,,Last Train Home’’, ,,Hanging Judge’’ and ,,Tribal Trance’’ are all highlights like only Armored Saint can bring that to their audience. The musicians are all seasoned through and through but what strikes me the most is the ‘mucho gusto’ attitude on stage of all band members involved. This band rocks and has not lost any of their class and attitude. Listen and look for yourself….

As is tradition these days there are several packages and formats available. Quite obviously there is the CD/DVD with the thirteen songs but the vinyl and digital formats offer something extra indeed in the form of a bunch of demo-tracks that were recorded before Dave Prichard passed, so basically his last recordings with Armored Saint. The digital version has the most bonus tracks compared to the vinyl version, so a real super freak fan might have to dig a bit deeper in his or her wallet to keep their collection of Armored Saint complete. This is only the third live-release of the group in their career until now I believe but it is a must have item! These boys are firing on all cylinders!