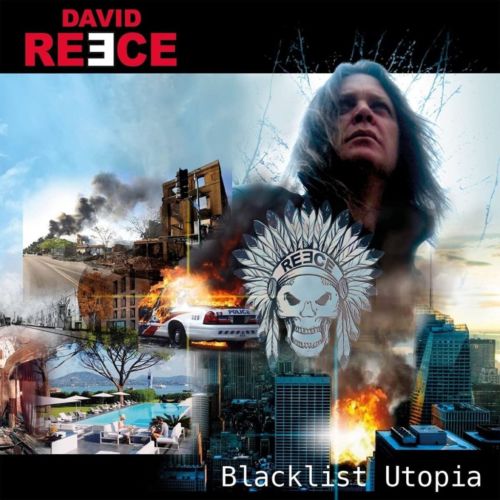 The career of US vocalist David Reece is moving along nicely. Ever since breaking ranks with Bonfire and after two albums also saying goodbye to Sainted Sinners the man works under his own banner which resulted in the outstanding album ‘Resilient Heart’ and last year ‘Cacophony Of Souls’ (which marked a return for David to German label El Puerto).

Reece has gathered a winning team around him for his new record ‘Blacklist Utopia’. Guitarist/producer Andy Susemihl has been working with David on ‘Cacophony Of Souls’ and the two go back a long time since first working together. Bassist Malte Frederik Burkert has been with David ever since the Sainted Sinners days and has appeared on all the above-mentioned albums. Drummer Francesco Jovino is of Primal Fear fame and has experience galore. With such a team how can you ever lose?

The thirteen songs on ‘Blacklist Utopia’ are of very solid stock. At times it seems that Reece and his companions are sailing a more melodic course as songs like ,,Highway Child’’ or ,,American Dream’’ give the album a more ‘melodic’ edge at times, but it is safe to say that the rest of the material brings us stuff that we more or less expect from David Reece. And that is energetic hard rock that flirts with metal, that is full of relentless guitar work by Susemihl with Reece himself printing his powerful pattern on the proceedings with a voice that has become very recognisable throughout the years. Burkert and Jovino provide a more than welcome boost of energy and strength to the songs.

Critics might say that David Reece on this album brings more of the same and that no real new avenues have been explored. In a way they may have a point but when you compare ‘Blacklist Utopia’ with ‘Resilient Heart’ and even ‘Cacophony Of Souls’ you will notice subtle differences and a steady improvement in sound and production. Sometimes progress comes in smaller steps and is made in other avenues. You can stick to a certain musical style and still improve on details. And that is exactly the case here.

With this album in the bag there are several other projects that will involve David Reece in the near future. He has been recording material with Wicked Sensation including a video shoot. He has also been working on songs with US rocker Mike Onesko. Also very recently he got involved with a new band called Iron Allies, featuring guitarist Herman Frank, bass player Donnie van Stavern and drummer Francesco Jovino. It looks like 2022 might be a busy year for the singer. But until new stuff rears its head ‘Blacklist Utopia’ will do the trick for Reece.