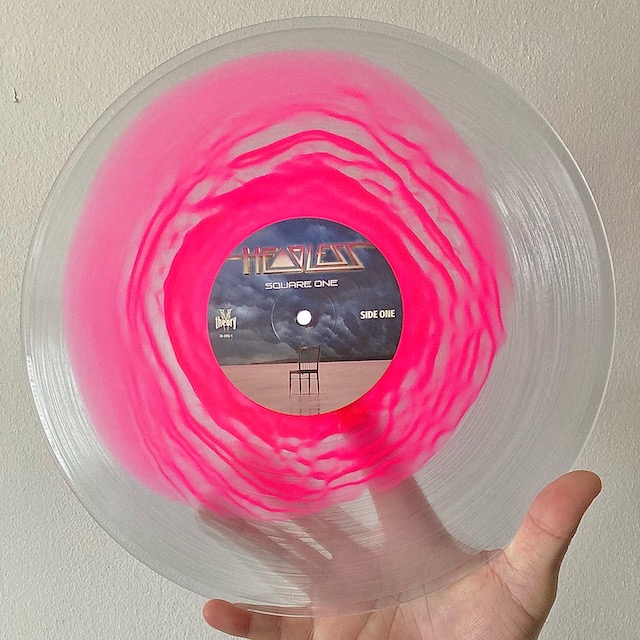 It spent months before this vinyl version of the last Headless album `Square One’ was finally released. Lined up in the enormous queue of vinyl releases delayed by prioritizing main releases in today’s expanding vinyl market, `Square One’ however benefits from the wait. Not because of the actual delay, but it might garnish extra attention with the album’s time seasoning with fans and listeners. Because one thing is immediately clear: this is an album that grew on me like crazy.

Benefitting from the delay will likely be interpreted differently by the band, but `Square One’ does not only benefit from the time it spent to grip the listener, it also benefits from this vinyl edition in terms of production. The organic and wide musical variety of the band, combined with the classic rock elements at hand, makes it climb the sonic ladder with powerful accolades.

`Square One’ displayed the band’s thrive and variety, as well as it established course and direction for the future. Guitar duo extraordinaire Walter Cianciusi and Dario Parente (both in Geoff Tate’s touring band) and drummer Enrico Cianciusi on drums, brought in the talents of vocalist Göran Edman (Madison, Yngwie, Kharma, etc) and bass player Martin Helmantel (Elegy, 7MTP) to give `Square One’ the swing it needed. The combined forces presented makes the album an exciting journey exploring the widest sonic horizons.

Packed with insane guitar harmonies and hooks, the album is bold as brass in terms of musical execution. Delving deep with bluesy tones it is opened by the wonderful ,,A Leaf’s Path” displaying Headless’ gigantic potential with Edman at the helm. The man sheds skin constantly touching his most powerful range on the double kicked ,,Woman in White” and the roaring ,,Step Back from Me” and wonderful ,,Risin’ Up”, the latter to be counted as one of rock’s finest tracks from the last year. Göran’s powerful vocals are escalated by the unison with Helmantel’s growling low-end bass lines and crafted upon the backbone of the powerful progressive beats from Enrico. The interaction is wonderful and fits like a glove.

Parente and Cianciusi trade off great guitar licks and discharge wonderful riffs, licks and fills towards their remarkable solo-interaction, like on the pitted but slick ,,Misdirection” with its droning riff and bass exchange. Progressively pulling forward the wonderful solos and insane harmonies of the guitar tandem is stellar, are is the intense vocal melodies. It oozes grandeur, increasingly powerful played on this vinyl.

HEADLESS GETS A SECOND CHANCE

The same towering elements pull forward the low rolling ,,Backseat Rhythm” and ,,Two’s Up” with Edman’s (Madison) moans and insane range displayed. ,,Tail down Low” touches with Pink Floyd’s ethereal structures embedded in the neo-prog metal strum of the song. The song pitches up to the prog monster ,,Langeweile”and power rocker ,,Streetlight Buzz” with again the insane guitar exchange of Cianciusi and Parente. Just check out the guitar solo colleague Willemsen pointed out in his initial review of the album [read here], touching all focal points of ,,Square One”.

Wonderful moments by the dozens, the album rolls forward with great diversity and thrive, propelled by stellar musical marksmanship and Göran as the inspired frontman he is. It touches prog, hints neo-prog, while being strongly rooted in melodic rock and metal. `Square One’ benefits from its powerful organic tone-range provided by the vinyl and pumping through my split-range Mission speakers. It has been on high rotation spinning for the last few days.

The album was severely overlooked upon its release and gets the possible second chance from this vinyl edition. It certainly needs to be explored by fans of melodic rock and metal, with an ear for diversity. Headless needs to be heard!