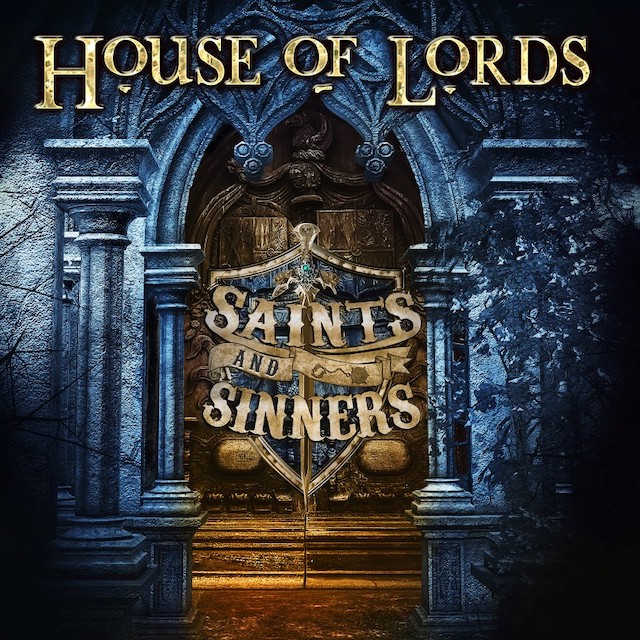 Fans of the ‘Lords’ will draw their wallets instantaneously. The new `Saints and Sinners’ is abound, and everybody knows what that means: crisp melodic hard rock with soaring melodies and luring vocal harmonies, served up with crisp guitar harmonies and soaring solos that are pulled forward with a solid groove. Garnished with lush keyboards and AOR slickness, the songs flourish. `Saints and Sinners’ is another “…jewel to the crown”, as the biography of House of Lords tells us. Let’s take a listen.

With Gregg Giuffria stepping down, the big lavishing keyboard driven side of the band, as displayed on their dazzling self-titled debut and the following `Sahara’, was also dismissed. I know, there also was `Demon’s Down’, but that latter already displayed the move into a harder rocking, straight forward dimension, with (slightly) lower keyboard density.

After they disbanded, Giuffria gave his blessings for a reunion with House of Lords taken in the direction set in on `Demon’s Down’. With singer extraordinaire James Christian at the helm, and Jimi Bell (Autograph, Maxx Explosion) on guitars, House of Lords released a stream of appealing rock records consisting of stellar marksmanship and ditto songs. `Saints and Sinners’ brings across that same potion, with Mark Mangold signing for keyboard duties and co-production. One big difference; drummer B.J. Zampa apparently left the house after 17-year duty, as drummer Johan Koleberg (Therion, Lions Share) is included for the drum recordings in the album credits. But that is the only big difference, since `Saints and Sinners’ fires on all the House of Lords engines.

It is James as the frontman drawing most attention. His soaring voice often touches tenor-range with bluesy classic rock phrasing and hard rock stamina. Mastering the art of constructing his vocal lines into powerful melodies and rich vocal harmonies, Christian kicks `Saints and Sinners’ into gear with blistering guitar-laden title track, which features an insane guitar melody and Christian in narrative fashion opening belting up slowly to the appealing large chorus, and the mid-paced lush ,,House of the Lord” with its lavish lamenting keyboards. Both songs immediately take you into the HOL comfort zone.

,,Take it All”, features the same ingredients and towers with its keyboard pushed chorus. The dominance of keys increased, keenly welded onto Bell’s magnificent guitar melodies and appealing riffs. Impressive is the hook and musical section with its more organic contemporary rock sound and Bell unleashing a short waling solo.

Touch comes to mind on ,,Road Warrior” with its intense bass and guitar interaction, and ‘Hammond’-opening, incorporating Mangold’s song specific elements with Christian’s soaring House of Lords specifics. It is simple and effective, like the rocking ,,Roll like Thunder” with luring bridge and (too) simple chorus over dynamic drum and bass, the double kicked ,,Razzle Dazzle” that breaks back to the Deep Purple spectre of the sonic universe, and the guitar injected ,,Dreamin’ it All” with its oozing vocal harmonies and guitar-keys strummed chorus.

Absolutely magnificent is the epic ,,Mistress of the Dark” with Christian belting with higher range (D5?) and more soaring phrasing, and the multi layered choruses taking point. Little progressive tweaks enhance its structure, reminiscent to the finest on `Sahara’, yet less bombastic. ,,Takin’ My Heart back” is another organic build classic rocker with insane hooks and powerful keys and guitar riff. Whaling the chorus into a bombastic motion, Bell propels the song with wonderful riff and hook wile Mangold lays down lush tapestry of swirling keys and pumping Hammond. James’ vocal delivery is in line with the orchestration, though somewhat flat pitched. More diversity is offered on the album closer ,,Angels Falling” where he displays his vocal diversity and stamina. Immense hooks build the song that flourishes with deep bass and its chorus powering up constantly. Enormous, yet subtle.

,,Avalanche” is a slow meandering piano (mandatory) ballad displaying James’ intensity and fine feeling for drama. In line with the band’s best ballads, it starts to bloom with intensifying drums and denser vocal interaction, yet falls a bit short.

`Saints and Sinners’ presents House of Lords and James Christian with renewed energy returning to the fold. The musical palette is widened and intensified with Mangold bringing in the keys that marked the band’s debuting days. Adding the Hammond sound and swirls he ignites the songs with an organic contemporary vigour, adding dimension. Diversity of the elusive debut, which marked a zestful introduction with wide array of styles fused, `Saints and Sinners’ sounds reminiscent. There’s more poise and drive in the deepened sound, without scaling back on their typical AOR arena rocking sound chockfull of vocal harmonies and impeccable choruses. The album sounds classic, yet refreshing at the same time.