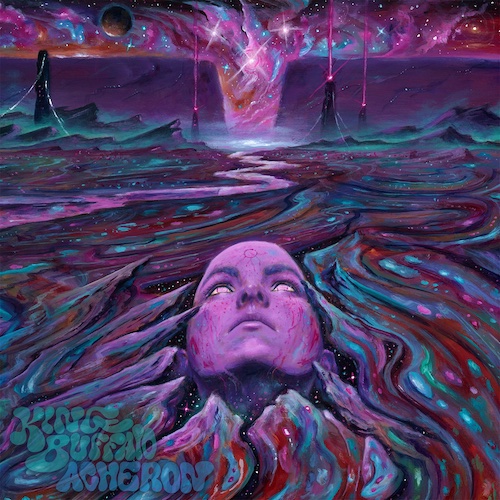 Hitting the record button playing in a cave. It is King Buffalo expanding their horizons and sonically exploring their musical territory. Announced are no less than four albums to be released and this all hails from a recording spree delving deep into their sonic roots and mind. `Acheron’ is the album that unloaded its finesse in a cave. Dripping water and sonic discharge of organic surroundings are present with a band delving deep. `Acheron’, brings us closer to the earth without losing the edge and brutal tidings the band has adopted on their previous releases.

Just a wee couple of months passed and `The Burden of Restlessness’ is still on heavy rotation in my car stereo. King Buffalo stuck to their promise of releasing no less than 3 albums during the current pandemic. At that moment I snuggled upon Scott’s target, but with `Acheron’ hitting my airwaves I found myself confronted by sheer prejudice.

`Acheron’ is not the typical album one expects after the unloading urge captured on `The Burden of Restlessness’. `Acheron’, hailing from Greek mythology, is much more refined and delves much deeper into the mind. While recording in Howe caverns, the band clearly moved closer to the organics of our world, a sound that breathes through their songs like a subtle layer of mist, a veil of deception. Though they claim to have not rounded the edges of the grim predecessor, `Acheron’ definitely floods with an emotional subnote that is more intense. Less agitated, less fierce, King Buffalo turns mellow without losing their chainsaw buzz.

,,Underground” is simply astonishing and opens the album with intensity. Organic it wells with emotion spotlighting McVay’s hoovering reverb on guitars. His playing moves back and forth in waves of emotion while striking you deep in the soul. Vocally it is intense and withering in beauty. Perfectly timed and even more perfectly captured. Dan Reynolds’ bass is persistent yet subdued in the musical cocktail while Scott Donaldson’s drums are also perfectly paced for subtlety. There is this hard to define pulsating urge present, hoovering in the song like the raw scuffling edge presented on `The Burden of Restlessness’ but subdued in a gripping animosity casted.

Very cinematic it flourishes sonically. Drifting on its lingering waves you are teleported into the magic of the album. 3 Minutes in guitars start to be distorted and power towers to harshly return to its pulsating dominant being. Nonetheless its return is also where it starts to break root and start to gradually build power. Over the dominating riff a whaling echo is brought forward with drum and bass intensifying.

The gradual build of `Acheron’ is ominous and marks the album for the next 3 chapters. ,,Zephyr” has an almost U2 reminiscent vibe casted before morphing into The Mission type of new wave power metal. The synergy of styles is empowered by the hoovering Hawkwind reminiscent keys and sound effects implemented. Sean’s vocals also add to the cocktail while the breaking motion and reverb emphasizes the intensity. More than `Acheron’ itself, ,,Zephyr” is the floating river transcending the album and orbiting King Buffalo’s sonic extravagance. Headphones are mandatory to seize the subtle bits and pieces of the song’s impressive execution. Clocking over 9 minutes the song packs more hit potential than any of the 80s wave and synth pop albums that broke big.

McVay’s personification of this eighties style and trend is so spot on that it nests deep on impact. His vocals are simply astonishing. The urging pace and Reynold’s imperative bass lines add to the pleasure while Donaldson’s agile polyrhythmic playing deepens the sonic palette. This symbiosis also puts ,,Shadows” into action, with hammering snare drums and plucking guitars. Dan’s bass has an ominous tendency moving up and down the neck, but again it is McVay who impresses. Guitars more dominant his melancholic vocals and plucking guitars pulls forward in 80s fashion. If there ever was a metallic reinvention of The Cure’s ,,A Forest” than it must be the daunting ,,Shadows” casted by King Buffalo.

,,Cerberus” is the final chapter on `Archeron’, also clocking almost 10 minutes. Much like Vivaldi’s ,,Quattro Stagioni”/ ,,The Four Seasons”, King Buffalo takes a different swing at its foundation. Drums dominating the opening the song is in line with its three predecessors. Reverb on guitars again dip the song in eighties melancholy. No wave reminiscence, the song leans to Pink Floyd’s `Momentary Lapse of Reason’ and borders with Dire Straits in terms of sound, before suddenly kicking into gear. All the withheld drama and melancholy of the previous tracks are stepped on like winter freezing over spring.

Guitar riffs dominantly toughening and drums, while refraining in their pace, but get more commencing. The guitar solo is simply drop dead gorgeous without losing its sharp edge. Best kept secret is Reynolds who steers the tracks through the welling waves and puts his mark on ,,Cerberus”. It is clear that ,,Cerberus” is the cliff hanger for the next album, fusing all of the band’s previous endeavours into one. Towards the end it picks up so much power and poise that is awes and amazes. Epic…. Mythical!

SOUNDTRACK OF THE CURRENT PANDEMIC

Though every member runs point at certain sections, it is the team effort and musical interaction that really stands out. Where `The Burden of Restlessness’ easily nested in my top 10 of 2021 releases, `Acheron’ does the same but takes more spins to land even deeper. It’s withheld grim undertone is scorching. Just check out ,,Shadows” harsh evolution midway suddenly dissolving in a drum pattern and echoing guitar lick, pulling forward with a thrive and grip even metalheads Metallica didn’t accomplished on the haunting ,,One”. `Acheron’ marks King Buffalo as one of metal’s most daring and thriving bands to date. This is the soundtrack of the current pandemic. More eminent than Mastodon, more dominant than Metallica… More….

Ah hell: This is King Buffalo, brace your f*cking selves!!!