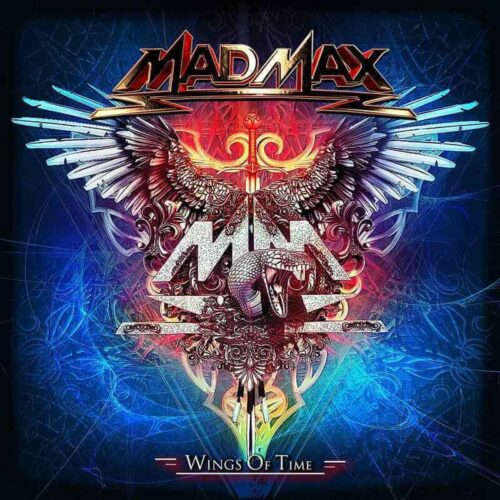 September 7, 2022 by Michel van de Moosdijk - More about our team

The question for German rockers Mad Max to answer with their new record ‘Wings Of Time’ was if there still would be life after the departure of founding member/singer/guitarist/producer Michael Voss not long after the release of the album ‘Stormchild Rising’.

It left core members Jürgen Breforth (guitar) and drummer Axel Kruse with the not so easy task to find new recruits while also they had to find a new record company as Steamhammer let the group go. The veteran rockers did their job and got a certain Julian Rolinger in as their new vocalist and very recently also guitarist Dethy Borchardt joined the Mad Max ranks (although he has not contributed to the new album). Starting out somewhere in 1982 already for Kruse and Breforth there was no way back as they did not want to give up on this band that since 2020 also has bass player Fabian Ranft in the line-up. With Rolinger they got in a singer that maybe not be able to make us forget Michael Voss just yet but fact is that he fits the bill perfectly.

I am not too sure how the recording process of ‘Wings Of Time’ exactly went but the fact that producer Sandro Giampietrio has played several guitar parts on the album together with co-producer Peter Lenzschau indicates that at the time of recording this album the Mad Max line-up was far from complete. What I am more surprised by is that also other musicians like Hugh McDonald (bass), Fred Zahl (guitar/bass), Marlon Zahl (drums) and a few others have contributed to the album. Obviously, there was no time or maybe patience to wait for the band to get their personnel troubles in order. But on the other hand, studio time is expensive so there was no time or money to be wasted.

The results of all these efforts are quite all right if you ask me. First of all, and as already indicated Julian Rolinger is a very worthy replacement of Michael Voss, he has got power, reach and he can sing a ballad. He fits in quite naturally with the style of Mad Max that as always is pretty melodic, at times quite robust and at times flirting with AOR. Especially with the vocal arrangements Mad Max sometimes moves into that direction (listen to the arrangements in the song ,,When It Stops’’).

The music is as we know from this band a mix between a power ballad such as ,,Rock Solid’’ (excellent vocal duet between Rolinger and Julia Salm), energetic tracks in the form of ,,Too Hot To Handle’’ and ,,Days Of Passion’’ and a semi-acoustic tearjerker in the form of ,,Freedom’’. ‘Wings Of Time’ might not be the most original CD out there (in fact ,,Miss Sacrifice’’ is a pretty basic song and filled with cliché’s) but looking at the whole picture, sound and overall performance Mad Max does not disappoint. Maybe the level of the Michael Voss-era is not completely there yet but it sounds pretty close to me.