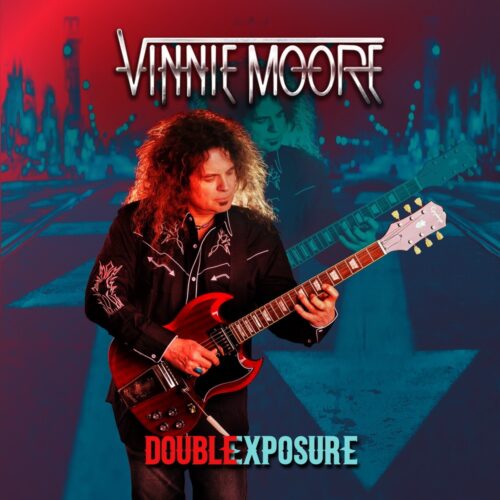 If you are talking about musicians that have been flying under the radar for most of their career the name Vinnie Moore is one that comes to mind. That is strange as he has now just released his tenth solo-album and he is also the longest serving guitarist in the illustrious career of the band UFO, being active in that band for almost twenty years now. As we all know on their farewell tour singer Phil Mogg suffered a heart attack and had to go in for surgery which caused the band to break off their tour. It is uncertain at this moment if the band will to able to finish their commitments and say goodbye properly and on their own terms.

Personally, I am still waiting on a new Red Zone Rider album, a group consisting of Moore, drummer Scott Coogan and singer/bass player extraordinaire Kelly Keeling that made an astonishing self-titled heavy rock album in 2014 but so far have not come up with a new chapter.

While writing his new songs during the lockdown period Vinnie Moore came up with the idea to change his concept. All his solo-albums have been purely instrumental happenings so far but he saw a possibility to add vocals to some of the new songs. That is why ‘Double Exposure’ is a split product. Six tracks have vocals, six are instrumental. Finding singers was not too difficult. Former Riot and Masterplan singer Mike DiMeo had worked with Moore before.

Former MSG, Steelhouse Lane and now Mother Road vocalist Keith Slack has been a friend for many years. Brian Stephenson supported Vinnie Moore during some shows years back with his own band Old James and Ed Terry had worked with Vinnie as well. So the guitarist knew exactly what kind of people he would get involved. He gave them the freedom to write lyrics and vocal lines for their contributions.

It is no surprise that ‘Double Exposure’ is very guitar orientated. The first six songs are with the singers of which Keith Slack makes the best impression to me. ,,Hummingbird’’ and ,,Paid My Dues’’ (for me the strongest track!) are not only carried by the guitar of Moore but also by the bluesy and smokie voice of Slack, who is just as underestimated as Vinnie Moore himself. In fact, all the songs with vocals are worthwhile hearing but the ones with Slack just have that bit extra. On the six instrumental songs Vinnie Moore shows off his enormous versatility as guitarist and as composer. It varies from heavy rock in the vein of Steve Vai, there are some Hendrix-type of features and with ,,One Day’’ there is a beautiful and emotional instrumental ballad on offer. Variety and excellence galore and an excellent production by the guitar master himself.

‘Double Exposure’ is a stylish and classic rock minded album where Vinnie Moore not only impresses as guitarist with his trademark sound but also as an all-round musician being able to write good songs and make them sound great as well. No, this is not an album that has a lot of UFO-type of trademarks at all but is strong enough to hopefully give Vinnie Moore a bit more recognition. This might even give the guitarist the thought of doing an all-vocal orientated album next time around.