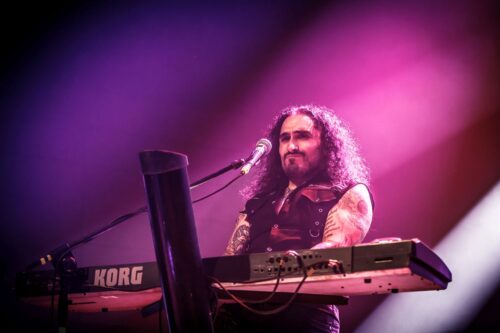 There can be no doubt that Alessandro Del Vecchio is by far the hardest working musician/song writer/producer of the last decade or so. He is the staff producer for the Italian rock label Frontiers Records and has been involved with an enormous amount of productions. But who is he? What makes him tick? HeadBangers LifeStyle send the man some questions and, while preparing to run the marathon of London, he found time in his busy schedule to answer them for us and our readers.

Can you give us an idea how you landed into the rock and roll business in the first place?
,,I started at a very early stage in my life. Fell in love with music when I was probably born since my parents surrounded us with great music. My most vivid memories from my childhood are us as a family listening to The Beatles or Jimi Hendrix from our hi-fi at home or in the car. I heard my ‘call’ when I was 11 listening to Queen’s ,,Bohemian Rhapsody’’ for the first time. I was hit by an emotion I never felt before and I only told myself that I wanted to be like them and do whatever they were doing. At the age of 16 I signed my first contract and started my professional career as a recording artist since then.’’

You are a multi-instrumentalist with maybe the main focus on keyboards. How did you develop all those different skills?
,,Only because of the need to write songs. I always played the other instruments but really had to develop those skills for writing and arranging songs. Singing came first though. I think I have the first recording of me singing when I was 2 or 3, haha!’’

Currently most of your days are spent in your own studio environment IvoryTears in the town of Somma Lombardo. Did you built the studio yourself and if yes how long did it take you to create that?
,,I now own basically 2 studios. I built the first one in 2011 which is where I do all my recordings. Followed by Studio B next door, which is where I write and produce basically. My main studio, we call it Studio A, is also used by external clients not directly with me as producer or involved in another capacity while Studio B has become the place where I work on a daily basis.’’

During the years we found you have been participating in several bands like Voodoo Circle (with Alex Beyrodt and Matt Sinner) and Mother Road (with Chris Lyne and Keith Slack) to name just a few. On top of that you have your own band Edge Of Forever. In how far is Edge Of Forever a priority these days for you?
,,Edge Of Forever is my home, my family, my place where you can hear, see, listen and learn who I am. Lyrically and musically EOF is myself for a hundred percent and beyond, so yes, it is my priority now’’

You are the staff producer of Frontiers Records for quite a while now. When and how did your cooperation with the label start?
,,I simply wrote an email to them since they had distributed my albums for almost 10 years and they asked if I had some material for them. I sent the first song, they liked it and here we are well some 100 albums later.’’

,,To me music needs and has to be a very pleasant experience”

The last decade your name is featured on an enormous amount of Frontiers releases, varying from Revolution Saints with three famous musicians to a fairly new name like James Robledo. Quite often we see that the projects are created and overseen by Frontiers president Serafino Perugino. Every project is obviously different but in how far does Serafino come up with a frame work for you to work with or is there complete freedom for you and the participating musicians?
,,It varies from album to album. Some demand a lot of work between Serafino and myself and we develop the concept and musical direction together. Some are more in a band format and we have Serafino just overseeing as executive.’’

In the early days producers were given a recording budget for the work that needed to be done. How is that with Frontiers?
,,It still works like that. When we start an album we know the budget and work accordingly.’’

Have you ever called Serafino and said something like: hey, with this group/artist I never want to work again in my life because they are impossible to work with!?
,,That only happened once. I simply never personally liked the artist involved with the album although it was him directly asking Frontiers to work with me. I was also surprised he wanted to work with me since he was also outspoken about me in the past. Maybe he wanted to patch things up but to me music needs and has to be a very pleasant experience with people I like and can love.’’

THE DAYS OF MUTT LANGE

Are you a democratic producer or someone who has a clear vision about a project and is not willing to compromise too much?
,,It all comes down to the good of the music. Whatever brings the song to a higher and better place I agree with.’’

Recording has changed throughout the years. The days of Mutt Lange that a band would be locked into a studio for a minimum of six months or so are long gone. Today you do not have to be in the same room to create something. Musicians can be spread out all over the world with you being in Italy coordinating everything. Which method has your preference and why? Isn’t it better to be in the same environment and feed of each other?
,,I still prefer working in person on the albums as it proves to be a winning combination time after time. But we got to accept the modern times and I also love the fact that artists sometimes have more time to dedicate to their deliveries since there is no clock ticking on their back and can have the luxury of recording at home.’’

Do you select the musicians you want or need for a project? Do you look for specific qualities? I mean Simone Mularoni is a different guitarist then Martin J. Andersen. How do you determine which musician fits best with a new project? Do you go for your gut feeling or do you analyse the specific qualities of the musicians you want to have for a project?
,,I always care about the final result and we always discuss the musicians before starting. Sometimes it is me proposing musicians, sometimes it is the label or the artist themselves.’’

Very often you also write or at least co-write the tunes. Never had the feeling where you say: damn, I could have used that composition for my own band Edge Of Forever?
,,Nah, never happened. When I write for EOF I write specifically for us. When it is for other bands or an artist my purpose is completely different so I never stress about that question.’’

,,I still prefer working in person on the albums.’’

There has also been some criticism on your production work. ‘It all sounds the same’ or `it is done on the automatic pilot’. Any reaction to that?
,,First of all I think it does not sound all the same. If you take Chalice Of Sin or The Grandmaster or Revolution Saints or Edge Of Forever or Hardline… they all sound different. Obviously the mind, ears and hands behind it could be the same but they all have their own personalities. If the artists are happy and the label is happy, I’m happy too.’’

It is impossible to highlight or mention each and every record you have worked on, but if you have to create a top three what would that look like?
,,Revolution Saints with their debut album. Hardline’s ‘Danger Zone’ and Edge Of Forever with ‘Native Soul’.’’

I have heard and reviewed a large amount of your productions. When I heard the Between Worlds record with Ronny Munroe on vocals I had the distinct feeling that he was singing somewhat out of his comfort zone. After Presto Ballet this was by far the most ‘melodic’ project he ever sang on (maybe together with Trans-Siberian Orchestra).

I prefer him to do the material he did with Metal Church and Peacemaker, where he really belts it out and can use the power in his pipes. I missed that a bit with Between Worlds, he sounded a bit timid to me. Can you comment on that?
,,Well, Ronny wrote every single melody on the album so I think this is what Ronny felt and wanted to express. On the other side, I really like that he could showcase his almost Steve Perry-like husky softer tone which can’t be exposed when he is belting out high notes. I am a big fan of Ronny so to me he is always a winning singer with that incredible tone.’’

Is there anybody that you would like to work with in the future, for instance a bloke like Michael Schenker of maybe Yngwie Malmsteen? What I mean is do you have a bucket list?
,,Haha , funny you mentioning Yngwie. Yes, out of affection he is the one I would like to work with! I would love to work with Paul McCartney too, never say never! All the others from my bucket list and beyond are already on my CV, so I guess I managed to accomplish a few dreams.’’

Have you had any holidays the last five years or so? What do you do to take some distance from recording and making music or is it something that you need to do every day?
,,Yes, I always take some time for myself during each day. To me myself and my family are the priority outside of music and work. I need sports to detach from the anxiety of the business and coping with everyday life. And my precious time at home with my family too. Every day I always determine what my priority is and then find time for work and music. It is never the other way around for me.’’

,,I think South America taught everyone a good lesson in the business.”

Is South America the continent for future good rock singers referring to for example Ronnie Romero, James Robledo, Gui Oliver, Nando Fernandes and Renan Zonta? Any explanation for that breakthrough of all that vocal talent in such a short period of time?
,,Well, it is a simple conjunction of space and time. I don’t think nationality makes a good singer but the voice can make a great one. Obviously the sound we are attached and used to is the English/American one because that is where everything was born for our genre. I think South America taught everyone a good lesson in the business. You never know which country might hide the next greatest voice. And I am very glad that I could work with the guys you mentioned. All of them besides being great singers are great human beings as well which could be due to the nationality.’’

Anything you would like to add on a personal note?
,,Thank you very much for this interview and for the great support you always have for us. It means the world to me!’’