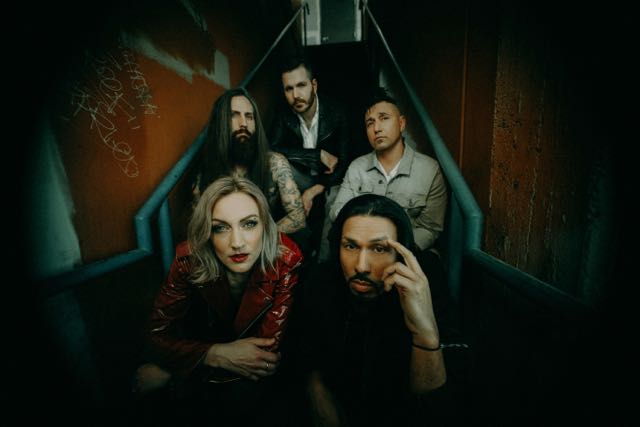 Rock ‘n Roll Is Not Dead

It’s already been three years ago that I spoke with the American alternative rock band Pop Evil at a press conference in Cologne, Germany, to talk about their latest album `Pop Evil’, their then new drummer Hayley Cramer, success and a bunch of other topics. Later in 2018 the Michigan-formed band went back on the road with great success and continued touring in 2019 as well. In April 2020 Pop Evil released the singles ,,Work’’ and ,,Let The Chaos Reign’’, followed by the third single ,,Breathe Again’’ in November 2020 and also officially announced the upcoming release of their sixth studio album `Versatile’, which they have been working on since Winter 2019 apparently. Like on their previous albums Pop Evil, which contains of vocalist Leigh Kakaty, lead guitarist Nick Fuelling, rhythm guitarist Dave Grahs, bass player Matt DiRito and drummer Hayley Cramer, kept things interesting and fresh by composing with an open mind, combining heavy rock with cool beats and elements from different non rock or metal sources and they sure didn’t hold back in exploring the exciting world of sound and production. To get our readers a quick update about this exciting new album and near future plans, I presented Leigh Kakaty a few questions.

,,We wanted to harness the energy from our demo process.’’-Leigh Kakaty

Are you happy and relieved `Versatile’ is finally finished and released?
,,We are very excited to finally have `Versatile’ released so our fans can enjoy it!’’

How do you recall the writing and recording process of this album and did you do things different this time?
,,The writing process was different. We did most of it in home studios as opposed to the big time recording studio. There was a more relaxed vibe for us being in a home rather than a studio under the clock. We wanted to harness the energy from our demo process so we put more focus on having our fans hear the ideas as organic as possible. We didn’t want to re-record a lot of vocals. A lot of these vocals on the album are from the original vocal sessions.  It’s hard to recreate the energy that comes from the moment a song is born.’’

Do you consider `Versatile’ an ambitious album? Maybe even more than ever in the band’s career?
,,Our focus has been to just keep growing and getting better. We are constantly thinking about our live shows and what kind of songs we can add to it to make them more enjoyable for our fans.’’

,,We weren’t really trying to over think anything on this record.’’-Leigh Kakaty

Are there compromises made or did you ignore all possible risks and outside opinions?
,,There are always creative inputs when making music. We are always willing to take opinions from each other as a band, team, and family. There are a lot of moving parts. Every song is different.’’

There are heavy moments for sure but the average metal head might get confused by the obvious EDM influences and even the big hooky choruses. How much rock and how much “mainstream” did you wanted `Versatile’ to be and how did you find balance in that?
,,We weren’t really trying to over think anything on this record. We obviously want to have our metal influence but at the same time, we always have liked to experiment and see what comes out of that energy. We tried to not set any boundaries for ourselves. Once the album was finished we felt like `Versatile’ was the perfect name.’’

What makes EDM appealing to you to actually wanted to embed it in your music and in what way did it give you creative input?
,,I personally am always writing to try and expand my musical journey. I am open to challenging myself to see what kind of melodies I can come up with in any style of music. There wasn’t any specific goal to try and implement an EDM sound. It was simply something I heard that moved me and I wrote to it. The band, team, and label all have to like it too. Things just all worked organically on this album. It was very natural.’’

,,We are here to try and prove that Rock ‘N Roll is alive and well!’’-Leigh Kakaty

What do you want your audience to understand about the lyrics of `Versatile’?
,,They are open to understand and interpret our album in any way they choose. That’s the true beauty of it all. Hopefully they take some positivity from the lyrics and apply that positivity to everyday life.’’

Can you clarify the promotion phrase: If rock is dead, then Pop Evil is definitive proof of the afterlife?
,,We are constantly hearing ‘rock is dead’ and we are here to try and prove that Rock ‘N Roll is alive and well!’’

Pop Evil is a live band. How do you recall the important tours you did back in 2018 and 2019 to support the previous studio album `Pop Evil’ and how was the reception of that album in general?
,,Our last album and tours were unforgettable. You can definitely feel the band growing.  Hopefully this new album and the tours we have coming up will add to the momentum we had before the pandemic hit!’’

How do you feel about the band’s near future and what plans are made already?
,,I feel like we definitely have a lot of work to do! Tours are already booked for the summer and Fall of 2021, which is a great sign! Our main focus is spreading the word on `Versatile’ and playing the songs live. We will all be non-stop in support of our new album `Versatile’.’’

Pop Evil is an American rock band that was formed in North Muskegon, Michigan, in 2001 by Leigh Kakaty.