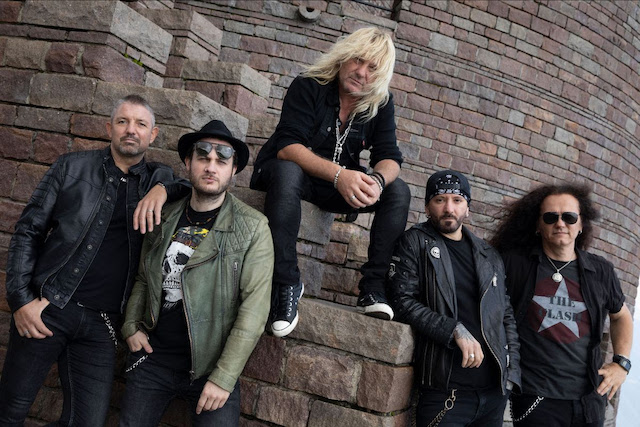 CORELEONI , featuring Gotthard guitarist Leo Leoni, present ,,Like It Or Not” music video in celebration of new album `III’ (out now!).

Leo comments, “I’m super happy that our new record is finally out: after months of waiting following its tracking and released now via our new partners in Atomic Fire Records, we’re very excited for you — our loyal fan base — to hear our new tunes which feature our frontman Eugent for the first time. But that’s not all as we have also put out another video single called ‘Like It Or Not’: it’s rather a party-suitable song and deals with a classic blues music theme, the devil trying to tempt mankind – in an ironical way, of course. Check it out and have fun with »III,« we can’t wait for your (hopefuly positive) feedback!”

They are one of the most passionate homages to classic hard rock that have stood out in recent years: CORELEONI. In the center of the formation literally beats the musical (lion) heart of guitar icon and GOTTHARD founding member Leo Leoni. Founded in 2018, CORELEONI surprised the rock community with their »The Greatest Hits – Part 1«, which was released seemingly overnight. The album, which revived the old GOTTHARD classics – and with them the spirit of the time – caused quite a stir.

Comparing GOTTHARD tracks like ‘Fist In Your Face’ and ‘I’m On My Way’ with new catchy anthems such as ‘Let Life Begin Tonight,”Purple Dynamite’ or ‘Guilty Under Pressure’ highlights the unbelievable timelessness and longevity of Leo Leoni‘s songwriting clearly. With “modern vintage,” Leoni describes the style in his own words and hits the nail on the head: classic and yet always up to date.

New on board with CORELEONI is singer Eugent Bushpepa. With his powerful voice, he adds a whole new level of authenticity and old spirit to the songs. “I don’t think anyone has released an album like this in a long time,” Leo Leoni states. “Hardly anyone thinks and writes in this way anymore or still uses Les Pauls guitars and Marshall amps the way we do. Personally, as a rock fan, I’ve missed that a lot in recent years. And Eugent Bushpepa has turned out to be an absolute stroke of luck for that. He underlines vocally exactly what I feel like doing and what I want to hear on a new rock album.”

No doubt about it, CORELEONI are an absolute affair of the heart. Grown out of the musicians’ personal desire to hear a new rock album in exactly this style again, a strong spirit has emerged, which the musicians, long since welded to friendship, now want to carry out into the world.