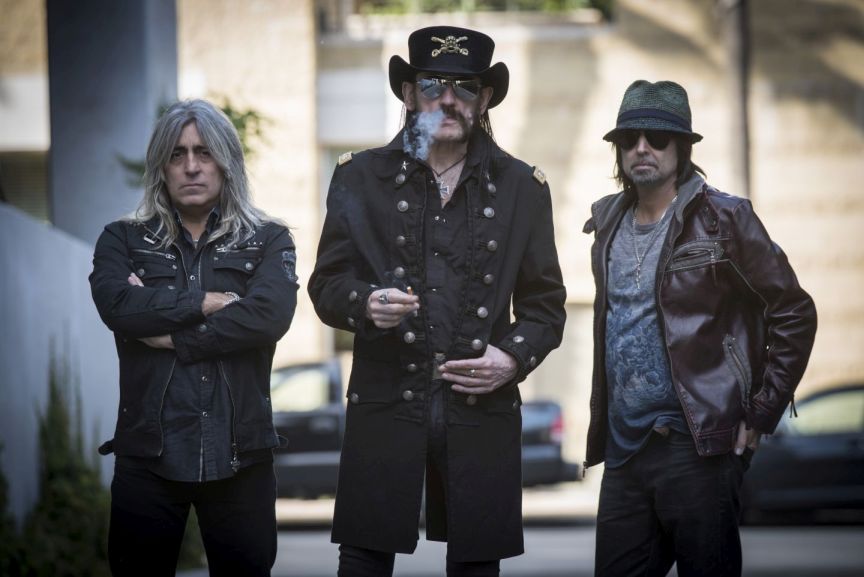 PRE-ORDER AT THIS LOCATION

“Greedy Bastards” is the second rare gem found in the recording session vaults for the 23rd (and final) studio album, Bad Magic in 2015. Instantly hailed as one of the best albums the beloved trio had recorded in many years, Bad Magic: SERIOUSLY BAD MAGIC is the ultimate bumper reissue, including the only recently released stomper “Bullet In Your Brain”, as well as a snarling, fangs-out live performance from the Bad Magic tour at the giant Mt Fuji Festival in Japan in 2015.

Fans will also get “War, Love, Death and Injustice”, an audio interview with Lemmy conducted by Motörhead expert Robert Kiewik during the tour, and should the desire to have a chat with Lem or anyone beyond this mortal coil arise, the box-set will exclusively contain a MURDER ONE ouija board (complete with the Ace of Spades planchette to spell out the conversation).

Kicking-off with a raw spoken word intro from Lemmy, “Greedy Bastards” profound message is as relevant today as ever, whilst delivered with the classic Motörhead rip-roaring, swagger.

“Another beauty from the Bad Magic sessions” comments guitarist Phil Campbell, “with Lem’s lyrics hitting our times bang on the head.”

The new animated video for “Greedy Bastards” can be watched at this location (video by Natalia Jonderko Śmiechowicz).

Bad Magic, released in 2015, produced by Cameron Webb and recorded live at NRG North Hollywood, Maple Studios and Grandmaster in California, unfurled into Motörhead’s toughest, leanest, meanest and most uncompromising album in aeons. Phil Campbell didn’t just record possibly his finest guitars, he threw down most certainly his best solos for decades, while Mikkey Dee’s drumming found new tribal resonance with the Motörhead sound he had helped nurture. From big-rig head crushers such as “Thunder & Lightning” and “Teach Them How To Bleed”, the crackling punk energy of “Electricity” to Brian May of Queen’s scintillating guest-appearance on “The Devil”, Bad Magic delivered the goods them some.

There was also one of Lemmy‘s rawest lyrical life reflections on “Till The End”, and a cover of The Rolling Stones’ “Sympathy For The Devil”. One of the hidden gold-dust additions to Bad Magic: SERIOUSLY BAD MAGIC, is Motörhead’s famous, and internationally acclaimed, version of David Bowie’s classic “Heroes”. It was a cover version which Lemmy had a great affection for, and as such its inclusion here is both fitting and just.

As the title says, this is Motörhead delivering some SERIOUSLY BAD MAGIC.

Watch/Listen to the recently released “Bullet In Your Brain” here

4. Shoot Out All of Your Lights

8. Teach Them How To Bleed

11. Choking On Your Screams

12. When The Sky Comes Looking For You

13. Sympathy For The Devil

15. Bullet In Your Brain

7. The Chase is Better Than the Catch