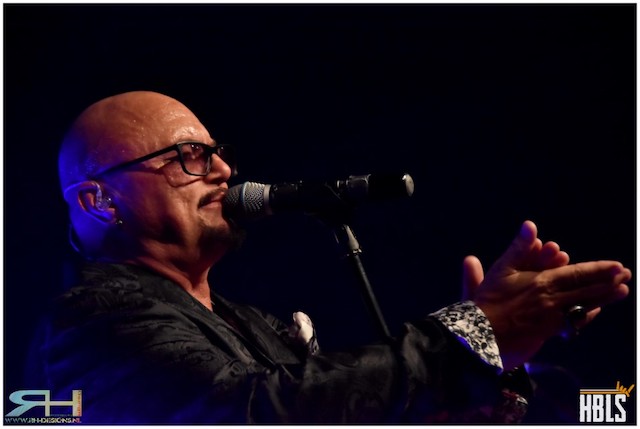 Last Sunday it finally happened. Geoff Tate, one of my favorite singers, came to Übach-Palenberg to play two classic Queensrÿche albums in full: ‘Rage For Order’ (1986) and ‘Empire’ (1990). Two albums that made quite a big impression when they came out, so I can say that expectations were quite high. The positive side of the evening was that Geoff and his band gave a great show. However, the evening ended on an off note, but more about that later.

Support act for today’s show, German/Swedish Jaded Heart kicks off with a set of bangers. They are around since 1994 and have no fewer than 14 albums to their name. Driving force and only original band member is bassist Michael Müller. In terms of musical direction it has all become a lot heavier than in the melodic early days. They open with the title song of their last album ‘Stand Your Ground’. Singer Johan Fahlberg, who is part of the formation since 2005, was in great shape and despite the early time [5PM], he even makes some jokes and does everything to get the audience fired up. The band makes the best use of the 30 minutes opening slot. They continue to play among others  ,,Reap What You Saw’’, ,,Rescue Me’’, ,,Love Is A Killer’’ and ,,Schizophrenic’’. They could [and should] have played on for a while longer, because once again Jaded Heart manages to make a good impression on me.

At the last minute, another support act was added to the lineup: Mark Daly. The Irish singer/songwriter is probably friends with Geoff or one of the band members, as bassist Jack Ross and drummer Daniel Laverde assist the singer during his performance. I can be very short about it. In my opinion not the act that should have played after Jaded Heart, because it just wasn’t good enough. Maybe also because I found the music way too grunge and completely out of tune with today’s audience. Many visitors left to get some fresh air in the courtyard of the hall. They came flooding in again when it all was finished.

And then it is almost time for the evening’s main course. But as somebody had forgotten to load the backdrop the day before, someone had to drive from Mannheim to pick it up and deliver it just in time for this show. The roadies try to hang it, which looks clumsily because the stage was already set. Anyway, the most important thing was that the backdrop was present again.

Finally the party can start and Geoff Tate’s band takes to the stage to kick off with ‘Rage For Order’ album opener, ,,Walk In The Shadows”. No less than 3 guitarists [Dario Parente, Kieran Robertson and Walter Cianciusi] replicate the guitar parts perfectly. Drummer Daniel Laverde and bassist Jack Ross rule big time. Geoff himself knows how to re-shape his vocals from 1986 in a powerful and charismatic way. And despite giving up somewhat high range over the years, he just remains a top vocalist. He probably took advantage of the mandatory rest because he is in a better vocal shape than before. Perhaps more importantly, he is clearly enjoying this gig.

The sound today in the Rockfabrik is excellent and crystal clear. While performing highlights like ,,The Killing Words’’ and, one of my favorites, ,,Neue Regel’’ Geoff informs us that performing this album in full, was on his bucket list for a while. A box he can clearly check now. I think a lot of fans of the album never had the chance to hear most of the album’s songs live in full [myself included] and this is probably the best [and only] way to hear it live. The way the band members execute it is just super tight. The tone is set and people get what they want. An evening of top musical entertainment.

The remaining songs of ‘Rage For Order’ are played in a more than pleasant way. Album closer and another of my all time QR tracks ,,I Will Remember’’ has a slightly different guitar arrangement. The average visitor would not have noticed it, but the timing of the guitar parts is slightly different from the original. Those are the things that strike me as a guitarist. I was certainly pleased with this version of the ‘Rage For Order‘ classics.

Before we move on to the full rendition of that other classic ‘Empire’, the band takes a 20 minutes break. Quite a strange sensation, since that’s not really the standard during live shows, but ok, it is what it is. As soon as the intro of ,,Best I Can’’ blasts through the speakers, the enthusiasm of the visitors is back.

What follows are again top performances of the songs from this album. The band is on fire, the visitors are having a good time and can enjoy wonderful versions of ,,The Thin Line’’ [with Geoff on saxophone], ,,Jet City Woman’’, ,,Della Brown’’, ,,Another Rainy Night ( Without You)’’, ,,Empire’’ and ,,Resistance’’.

However, what nobody expects is that after ,,Resistance’’ Geoff tells the audience that there is a technical problem somewhere. That there is no power anymore and the band unfortunately has to take a break again.

They disappear from the stage in no time, unfortunately not to return, because the problem turns out to be unsolvable. The question from the audience is if the band could do something acoustic but according to the tour manager that is not possible. Unfortunately the band also don’t have the decency to come back on stage and say goodbye to the audience in an appropriate way [in my opinion the only right thing they should have done, because people did pay for this show]. Quite a very abrupt and disappointing ending.

Later, on the socials of guitarist Kieran, it appears that this problem had already occurred twice before during this tour. Which gives me the feeling that it had nothing to do with the venue but everything with the equipment of the band.
Anyway, I got to see a band and Geoff Tate in top form tonight. A performance that unfortunately will remain in my memory because of the abrupt ending on an off note. Just like the rest of the people present, I am leaving somewhat disappointed, to listen to the remaining part of the ‘Empire’ songs at home.