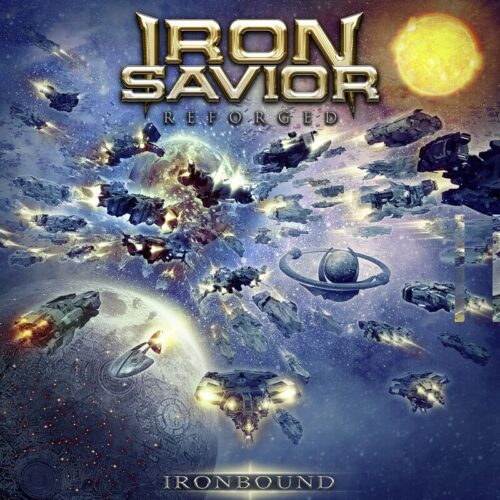 September 5, 2022 by Michel van de Moosdijk - More about our team

What do you do when your old albums for legal reasons are no longer possible to re-release in their original status? It is a question that Iron Savior singer/guitarist Piet Sielck was confronted with some years ago when he tried to re-release several old Iron Savior albums that once were released by Noise Records. Piet decided to take the best songs of his older releases and record them again. In 2017 ‘Reforged – Riding On Fire’ came out, a fresh recorded album with the best of the old tracks from albums like ‘Iron Savior’, ‘Battering Ram’ and several others. Now, some five years later and requested by fans and inspired by the feedback that ‘Reforged – Riding On Fire’ achieved the trick has been repeated.

This power and speed metal band hailing from Hamburg, Germany has been around since 1996 and had a certain Kai Hansen in the line-up for several years. The band has released a significant bunch of records mostly produced by Piet Sielck who has his own studio which makes things a lot easier, I guess. Style-wise there are enormous similarities with bands like Blind Guardian, Primal Fear, Helloween, Gamma Ray etcetera. Can’t say that Iron Savior had an original sound or approach during all these years but Sielck and his companions definitely stayed true to themselves and never really gave in to new trends, which is probably the main reason they are still around as their main market has always been Germany.

The music has always been hard, guitar orientated, at times super-fast and very metal indeed. On the 23 songs on this double CD (also available on vinyl I believe) the band once again looks back on their own musical history and even has a cover of ,,Sweet Dreams’’ of The Eurythmics (the pop duo Annie Lennox and Dave Stewart) on offer but that track has been given a nice metal jacket by Sielck and Company. I must say that the new versions really sound overwhelming, although not all songs are as good as each other perhaps. Iron Savior has not always been my cup of tea but on this one Sielck and his band (even Kai Hansen has contributed again) have done a good job. Fan of power and speed orientated metal and maybe not completely familiar with earlier releases of this group? Try out ‘Reforged – Ironbound (Vol.2)’!