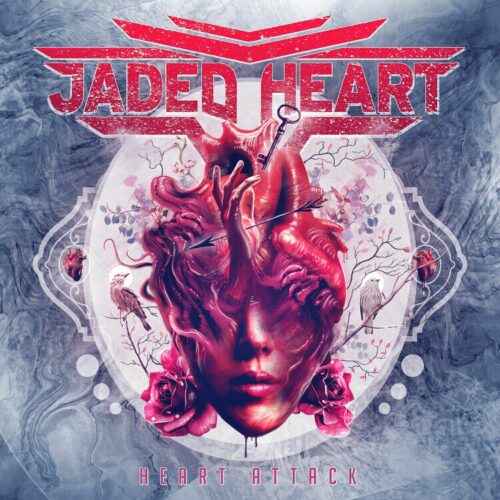 On their 17th (!) album (that includes live and compilation releases) ‘Heart Attack’ this German/Swedish outfit sounds pissed off! I have got no idea what got in the veins of bass player/band founder Michael Muller, singer Johan Fahlberg, drummer Bodo Stricker and guitarist Peter Ostros, but it has surely led to the most aggressive Jaded Heart album in their career that started in the German city of Duisburg some three decades ago. After their latest release ‘Stand Your Ground’ in 2020 second guitarist Masa Eto decided to take a few steps back and become a team member. Not sure if the Japanese guitar slinger in the near future will be on stage with the band or not, but judging on the sound of their latest albums this band definitely needs a second guitarist on stage to reproduce their massive sound.

The eleven songs on ‘Heart Attack’ will make anyone aware that this time Jaded Heart is not taking any prisoners. Starting out as a melodic rock band all those years ago the group always flirted with metal, especially since powerhouse Johan Fahlberg entered the ranks in 2004. Today Jaded Heart plays heavy metal but is flirting with melodic rock where-ever they can. No idea where this sudden metal overdrive is coming from but I dig out from top to bottom. The guitar work is relentless, has lots of twin guitar parts (no way that one guitarist can do this live all by himself), Muller and Stricker lay down a cast iron tempo all the way and Fahlberg sounds better than he ever did.

Take for instance a song like ,,Lady Spider’’, it is like the band has gotten into a complete overdrive here, flirting with speed metal. Or how about ,,Descent’’, a 8 minute epic track with melodic interludes but also a song that clips you around the ears, just as ,,Remnants Of Before’’ does. Add to that a powerful production and songs that all have a certain quality and crunch and you have your explanation why ‘Heart Attack’ is proof of the fact that a band even after close to 30 years in the business is still able to broaden their own musical horizons.  Not to be missed metal heads!