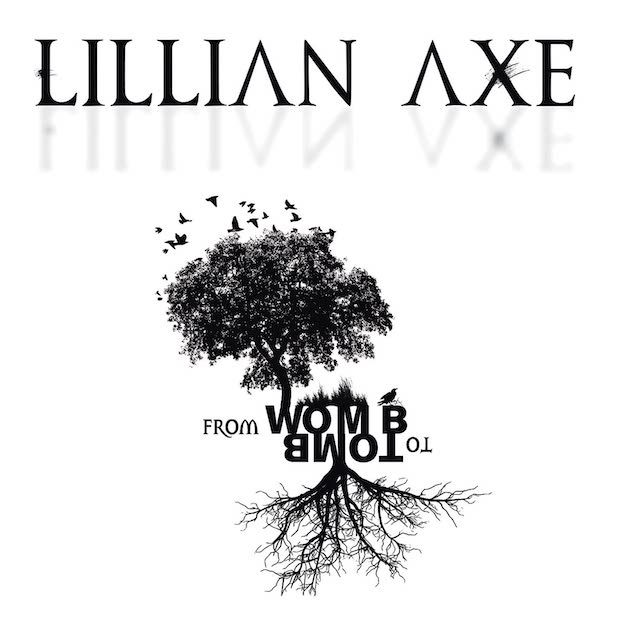 Lillian Axe always defied the boundaries of melodic rock. Since the band shot root with their eponymous debut and the immaculate ground breaking follow-up `Love + War’, Steve Blaze and his band drew up a new dimension in melodic rock, injecting it with progressive elements, heavy riffs contrasting with its guitar melodies, and melancholic welling choruses, to contrive an orbiting blend of rock and heavy metal. That uniqueness excels on the brand new `From Womb to Tomb’, uniting the widest array of influences into the typical melodic metal Lillian Axe made their trademark.

The album leans on the shoulders of an autobiographical ‘cradle to the grave’ concept that is elevated by its luring musical variety, bringing forward a story board listeners relay to. Though not the typical struggle of mind, `From Womb to Tomb’ reveals a depth transferable to the current state of the world, mankind’s lifespan and celebrating life’s glory, its path, as well as the glory and agony.

It’s been a decade since the release of their acclaimed `XI: The Days before Tomorrow’, with `From Womb to Tomb’ announced 4 years ago. In the meantime, Steve and ‘The Axe’ parted ways with singer Brian Jones, bringing in Brant Graham for the album, while releasing a career spanning 3-disc collection `Psalms for Eternity’ bringing Lillian Axe back to the fold. `Psalms for Eternity’ proves the band’s evolution, challenging music and outlines of the genres they craft their songs upon. It is an impeccable calling card towards the new album, crushing possible prejudice with vigorous execution of an album that needs to be experienced front to back.

`From Womb to Tomb’ opens with a wonderous and beautiful piano section dissolving into the song’s dense chorus with a heavy riff blended with staccato string arrangements. Signature Blaze guitar melodies are building steadily into the song’s finally with bells tolling leading us into the melodic ,,I am Beyond”. The album’s current video single brings together the typical melodic Lillian Axe lustre, with a dominant riff mid centre. Brent Graham displays his vocal range, switching between the band-typical needed (somewhat melodic) voice and the powerful metal poise. ,,I am Beyond” wells with emotional sections shifting back gear with multi-layered psychedelic choirs, reminiscent to King’s X and Saigon Kick, cemented to lush melodies and glorious musical accolades.

Tapping the progressive vein, Lillian Axe morphs ,,Neverending Me (Dempsey’s Kick)” from a track easily matching the melodic appeal of ,,Poetic Justice”. Subtle harmonies and melodies lure you into the comfort of your genetic ‘being’, whilst the song breaks into progressive explorations displaying the evolution of character. The exchange of guitar riffs and melodies between Blaze and Sam Poitevin is intense, with the song building into its metal prance. Brent belts another versatile vocal job reviving the Taylor-past whilst injecting it with his unique heavier dosed swagger.

It’s that swagger he maintains for the next cracker ,,The Golden Dragon”reverting to the classic Lillian Axe stylistics. Heavy riffs and dynamic drums pull forward with insane stride, with Blaze and Poitevin discharging shred allure over the progressive marking of the song. Elevating its lyrical content, the song instantly makes the Lillian Axe top 10 for me.

Weaving the conceptual musical content together Blaze relies on short interludes like ,,Piercing the Veil” and ,,A” enhancing the mood-palette binding songs and ‘acts’ of the album’s story. ,,Piercing…” pastes a melancholic picture towards the gloomy piano pulled ,,Migrating North” that also displays the sublime vocal interaction of Graham and Blaze. Stormy weather announced with the song building its tension and unloading the glorious lyrical outcall ,,We Will Be Free Again, One With The World Again” and music intensifying for a powerful ending with shifting vocal lines, tolling bell and guitars firing on all engines.

Wonderful guitar solos suddenly drop and the song returns to form, leaving you perplexed. Blaze keenly knits the piano ballad to the slow acoustic strummed ,,No Problem”, that sees Brent elevate with his performance. Subtle in his tone, he blends color with the acoustic tone meandering. This same interaction he brings forward on the absolutely wonderful ,,Dance of the Maggots”. Operatic chants kick it into gear with mood changes and acoustic sections welded to the songs progressive structure. Heavy on the choruses, unloading pompous appeal empowering the lyrics, while Blaze frequently reverts to his typical enticing lush melodies. Heavy beats and dynamic drums excel with riffs dense the atmosphere.

Sound fragments of flies that exhort from the carcass of the old personality left to decay and find refuge in the powerful progressive musical section that is bold as brass. Towering solos take it to the glorious chants of the song’s finale, that is simply astonishing.

THE TYPICAL APPEAL OF THE LILLIAN AXE SOUND

It cleanses for the following ,,Fall of the Human Condition” follows the typical appeal of the Lillian Axe sound but suddenly goes frenetic. Unleashing a double kicked pace and spitting fierce solos, the song needs the listener to adjust, though it returns to its glorious melodic accolades. Choruses well with emotion and its multi layered structures are psychedelic and captivating beautiful. Fading out with a stretched guitar note it sweeps into ,,The Great Deception”. Plucking guitars meander over Wayne Stokely’s dynamic jazzy drum patters and Michael Darby’s low heavy bass. The chorus breaks to metallic ground with shrugging riffs and powerful drum breaks paving the path for an echoing solo. Brent belts a powerful chorus with power that feels hollow, matching the song’s outcall and lyrical underscore.

,,Endless Green Fields” is another short interlude opening to another Axe-track blending the band’s entire catalogue. ,,Feelings of Absinthe” is a keen word play unifying bitterness and grief in the wormwood of tasting life itself. Attractive vocal lines and melodies, guitars with intense riffs and melodies discharged, powerful drum and bass, and towering choruses that nest instantly. Vocal interaction again dominates and the interaction between Poitevin and Blaze is subliminally evoking the song’s tendencies. The song’s narrative brings forward by the closing act of the album that is introduced on ,,Finally Clarity” as spoken word, contemplating the rebirth of ‘being’ in spiritual conception of the ghost, rather than the physical state.

THE EXCLAMATION POINT OF THE ALBUM

A moment that is intimate and frail, welling with narrative power, taking us into the grandiose ,,From the Rooftops” uttering an all present peaceful feeling in its opening. Intensifying orchestration, it has Graham belting out his most powerful vocal job on `From Womb to Tomb’. Guitar melodies unload pristine power and the melodies take over with drum rolls taking the helm. Assembling the glorious chorus, Blaze draws from epic symphonic metal elements accumulating the larger-than-life sound and pompous lustre with the listener in the middle of an all revealing experience life being exposed in its majestic grandeur.

,,Ascension” closes the album in style, with meandering guitars and echoing vocals, in the style of their classic ,,See you Someday”, with lyrical sections reverting to that ballad. Flourishing with building intensity the song is the exclamation point of the album, summarizing the rebirth of the mind and soul elevating the higher powers of our ‘being’. Echoing are the vocals, slightly melancholic tinged, building to a divine end. Smashing back and forth between its splendour and spectacular accolades the song dies out with disposition of old vs new, womb vs tomb, and birth vs death….

Steve described `From Womb to Tomb’ as the “timeline from the birth of a child to the ascension of the soul, with each song emphasizing a specific time of one’s life and the lesson learned therein”. It summarizes the album’s intriguing concept, yet surpasses the wider transitional aspirations of the album’s musical and lyrical content, transferable onto the state of the world, mankind’s eternal struggles and questions, as well as the political and social transformation of lives at stake. At least: that is my feeling. This Lillian Axe album is THE magnum opus of Blaze and his troupe, colliding their autobiographical concept with a graphic musical outline invoking its conceptual imagery in vivid colors through your heart and soul, channelling the inner being’s urges and emotions.

An album that needs to be heard, and needs the listener’s fullest attention. ,,Spectacular” merely covers the albums intensity. Must listen, must experience….