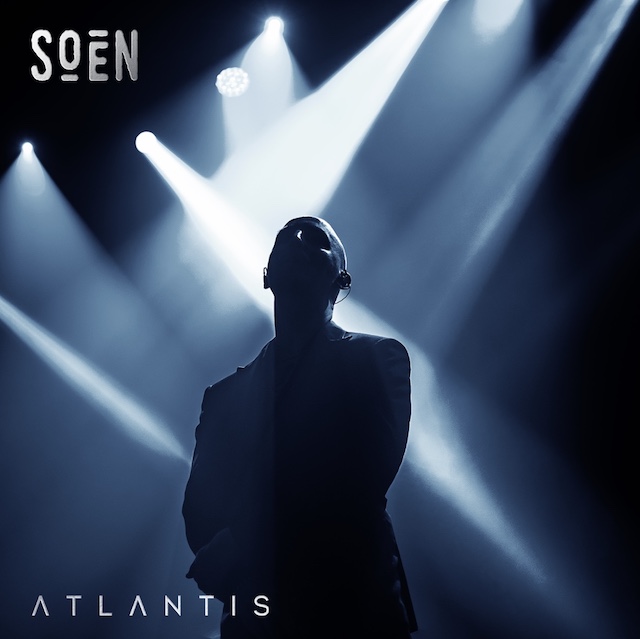 If I recall correctly, this new live-release of Soen is a re-edited version of their February livestream as transmitted from the Atlantis Grammofon recording studios in Gothenburg, Sweden. Broadcasted on yours truly’s birthday, I had to refrain from ‘attendance’, read: login. Nonetheless, I managed to catch some glimpses of the special event later and got exposed to rumors of the grandeur of the performance. With `Atlantis’ dropping, the band has luckily decided to capture the special event for eternity and share in the best possible way of both, high resolution images and state of the art sound. `Atlantis’ certainly benefits, to appraisal of fans and music all aficionados.

Because let’s make one thing crystal clear here: This is as good as it gets!

Soen has been pushing the envelope, has been exploring the boundaries of the genre, deepening their sound. `Atlantis’ is the showcase of exactly that. In an intimate setting at the Grammofon studios, the band presented their most subtle side. Accompanied by a string section and two background singers, they added an entire new lustre to their deepest and most touching momentum. All songs got blown air into them, by stepping away from the heavy rocking elemental instrumentation, relying solely on the appeal and construction of the songs at hand. Re-arranged and recrafted on the body of its recognitional recognizable framework, the songs are injected a sophisticated subtlety and wider appeal.

,,Antagonist” is the perfect example. Oozing melancholy, it benefits from the close harmony interaction of Joel Ekelöf and the two female background vocalists, delivering an intimate and welling performance. The addition of the female vocals adds an impressive layer of contrast to Joel’s deep dripping vocals and sublime phrasing. The concoction of voices is pitch perfect and rich. Static in his performance it adds to the ambiance, with the studio gloomily lit by lightbulbs only.

The timid setting is extra emphasized with the band ‘gathering around’ and the strings positioned at their very side. Violins and cello pumps up the arrangements, and the plucking of their strings gives extra depth on the following ,,Lunacy” opening. Dominated by Oleksii Kobel’s deep pulsating bass, the song meanders in grandeur. Bombastic sections make it well with power and the collision of Lars Åhlund and Cody Lee Ford’s guitars is towering the track. Its Phrygian scaled chorus eludes with Martin López’ drums powering up to blend beat with strings. The outcome is simply phenomenal, with the background vocals accenting the luxurious higher sections.

The fusion of their intricate progressive constructed songs with these richer elements simply is astounding. It all adds up. Just check out the enchantingly arranged ,,Monarch” in which you simply tend to forget the original heavy structures. You also tend to forget López’ background and heavy hitting persona. Utilizing the subtlest beats possible, he displays his fertile and dynamic range, he maintains the dynamics and appeal of the songs.

Tapping the Floydian vein, ,,Trials” packs floaty guitar solos in the Gilmour tradition with Kobel’s bass being lit by the added contrabass depth. There’s so much richness in the song, it overwhelms. The song perfectly bridges to the piano-string dictated ,,River”, meandering through my Mission speakers. When bass starts to vibrate its low, the stagnant beat lays out a deep and dark classic atmosphere with strings and guitars in fine tune. Short hybrid solo, pitch perfect, before piano jabs lift towards the heavier solo and reverbing chorus. Intensifying string inject a ,,Dance Macabre” withering tone and background vocals take the helm to deliver one of the performances finest moment. Simply awing.

The profound strings and reverbing guitar make ,,Jinn” flourish. Intense time changes gradually build into the powerful eluding chorus. There’s an elastic propulsion in the beat with rudiments on snare and floors from Martin, emulating off the growly aggressive bass tone backed by the low end on contra. The addition of Djembe drums is subtle, tribal. A lot of the song’s fills and decorations that aren’t repetitive and make for a progressive exhibition of proficiency without losing sight of the overwhelming appeal of ,,River”. Centred around intense interaction of Joel’s vocals and the dominant waltzing Obbligato violin in duet style.

,,Illusion” and the proggy jazzy ,,Modest” further display the band’s fine touching and emotive creativity, with spotlight on Ekelöf’s crooning midrange and placid calming elements, dripping emotion. Belting ,,Modest” with pitches, Joel dips the rocking section of the song in resonant falsetto, propelling the track. Calmer is the atmospheric ,,Lucidity” that again displays the vocal harmonies spot on. Gorgeous vocal interaction and guitar melodies strum forward with keen string arrangements on top. Drums pick up the beat while violins scatter discomfort in the cinematic song. ,,Savia” reverbs with its prog bass lick and multiverse drum patterns, invoking a Tool vibe. Strings screech into action over the blunt riff part before the vocal interaction tones down the build of tension. Unnecessarily shaking off comparison the structure of the song is both lush and progressive, with new arrangements adding to its charming and withering dejection.

Unexpectedly Soen delves into their own favorites with Slipknot’s ,,Snuff” receiving the Soen make over. The outcome is mesmerizing, with Joel’s vocals magnifying the song’s initial gloam. Strings and vocals lift the song to orbit with pompous loud roar. It is a surprise outshined by fan favorites ,,Lascivious” and ,,Lotus”, both performed with their progressive jazzy sculptured arrangements in place, but implemented with the wonderful piano and string arrangements pushing it forward.

,,Lascivious” is subtle and packs tremendous emotion welling through the bluesy guitars and Joel’s powerful vocal delivery. Dying notes with strings ebbing away in the first chapter; sublime. Dominated by the pulsating low bass, lush drum fills and staccato string parts powering up, the song sees fusion of styles vividly retuning alive. Again, the vocal sections are grandiose with Ekelöf delving deep and the ladies pitching up for intense phrasing. The jazzy midsection scatters with musical profanity of dry drum shuffles and military snares progressing to the wonderful vocal sections preceded by dry breaks before flourishing.

,,Lotus” is the performance’s Grande finale indeed! Piano and organ, wonderful guitar licks and melodies, over the dynamic, yet very prolific drums fills, make ,,Lotus” flower with abundance of emotions. Colorful and tasteful guitar and string interaction and Joel’s frail sombre tone make it shine. It is like a heartbeat that slowly fades out this performance in style.

The DVD/Blu-ray also features a bonus section zooming in on the band’s decision to stream this event and the how and why of rearranging their songs for this special performance. The interview tells the story of the band’s standing towards their future during the pandemic, with snippets of the rehearsals and preparations adding value. Unfortunately, no extra tracks.

This concert film of Soen is a definite must see. Minor issue is the cut offs after every performed track, not benefiting the flow of the gig. Whether or not this also occurs on the on the release, I can’t acknowledge being granted access to the online pre-release. But the general conclusion is this is a phenomenal experience. Soen creates a special brand of progrock with metal accolades that holds up in a timid atmospherically setting as displayed on `Atlantis’. The outcome is magnificent and makes for metal history. Invite family and friends to diner and play `Atlantis’ in the background to evoke questions and remarks about your choice of music.

No one will believe you!