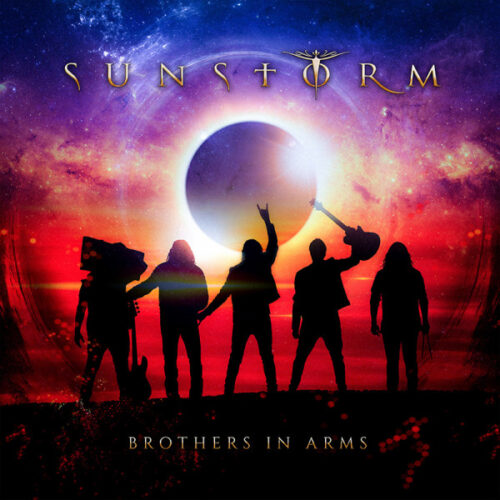 When Sunstorm released the album ‘Afterlife’ in the early months of 2021 there were people who were not so happy that Joe Lynn Turner was no longer the singer, as originally this whole project was built around him. When Turner announced that he would no longer be part of the project it seemed that Sunstorm would be over and done with. But the higher powers of Frontiers Records decided otherwise and got Ronnie Romero to take JLT’s place, which led to some criticism especially as for Romero it was yet another project and band, he got involved with maybe overexposing himself too much.

The thing is that for some musicians their voice is their way of making a living. Guys like for instance David Readman, David Reece, Kent Hilli and Steve Overland are also involved in different bands and lend their voice to projects in order to make ends meet in their daily life. Can you blame a person for trying to make a living? No, you can’t. The only thing you can hope for is that musicians chose their projects with a certain amount of carefulness, avoiding overexposure.

The thing is that ‘Afterlife’ was quite a good album, maybe a bit different then when JLT was involved perhaps but still more than okay. And let me tell you something about ‘Brothers In Arms’, the latest Sunstorm record, it is even better in comparison with ‘Afterlife’. Recorded by drummer Michele Sanna, bass player Nick Mazzucconi, the inevitable Alessandro del Vecchio (keys/production/ song writing), obviously Ronnie Romero plus new guitarist Luca Princiotta (Doro) the album is a pure tribute to vintage AOR and seventies/eighties classic rock.

We know Romero as an all-round rock and metal vocalist who can tackle any style that is in one or another way connected with rock. The examples are there for the taking, we do not have to go into that. If you haven’t heard anything with Romero singing you have not been with it the last five years or so. On the latest Sunstorm Romero uses a more melodic approach and is extending his capacities, proving that he is also able to sing a melodic rock style that merges nicely with AOR (like he actually did on the latest Vandenberg album).

I must say that the songs on ‘Brothers In Arms’ are at stages quite spectacular as well. Not only sounding powerful but also very versatile and classic rock minded most of the time. Add to that some stylish and colourful keys provided by Del Vecchio, sharp guitar parts and a solid backing of bass and drums and you can say that in a way the legacy that Sunstorm built up with JLT has been honoured and with songs as ,,Back My Dreams’’ (listen to that keyboard solo) or a fast hard rocker like ,,Lost In The Shadows Of Love’’ (with a crazy intermezzo between keys and guitar) this outfit is well on its way to create their own legacy.

It is not that Sunstorm is re-inventing the musical wheel on ‘Brothers In Arms’ but it is all of such an immaculate quality that I dare to say that this release matches the earlier Sunstorm releases with JLT and maybe even surpasses them at certain moments. A conclusion that I actually never thought of being able to draw as I am an enormous JLT-adept and disappointed to find out that JLT had bailed ship on Sunstorm. But now that things have changed I can live very well with the current musicians involved.