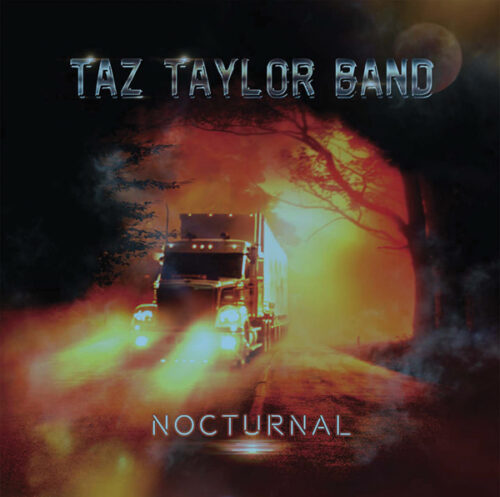 Taz Taylor was born in the UK but made a move to the United States hoping to make it as a musician. In the first years he drove heavy trucks all over the States and in the meantime he practised guitar and released an instrumental album called ‘Caffeine Racer’. Graham Bonnet and Keith Slack helped him out with vocals on other albums like ‘Welcome To America’ (Bonnet) and ‘Straight Up’ (Slack). Other albums followed like ‘Big Dumb Rock’, ‘Deja Voodoo’ and ‘Pressure and Time’ on which singer Chandler Mogel helped out. You might remember Mogel from the Denner’s Inferno album ‘In Amber’ (2019) but the man has also sung in Talon and Double Vision (a Foreigner tribute formation).

For his latest album Taz Taylor hired a bunch of singers including Mogel. Graham Bonnet, Doogie White, Mark Boals and David Reece also got involved with ‘Nocturnal’ (the cover features a big truck, reminding of what Taylor did for a living). For some years now Taz Taylor can count on the services of Val Trainor (drums) and B.L. Firks (bass) and together they form a solid and reliable sounding power trio where Firks and Trainor supply the basics for Taz Taylor to do his thing. The guitarist recorded the album in his hometown of San Diego but I presume that the singers recorded their parts in their own environment.

Taylor did write all songs but gave his singers the space to write their own lyrics and vocal melodies. ,,Wasting My Time’’ featuring David Reece sets the tone for the album. Robust heavy rock with flashy guitar work by Taylor who is a very decent guitarist as proves throughout the whole album that includes a few instrumental tracks as well, but that is something that Taz Taylor has done throughout his whole career. Especially his acoustic playing on ,,George’s Song’’ is nice.

Does the album deliver quality all over? Well, I must say that drummer Trainor and bass player Firks do not add an awful lot to the mix. They are role players. All the fireworks  comes from Taylor and the vocalists but the song ,,Out Of Time’’ with Mark Boals singing is rather disappointing with a very simply and predictable lyric and a rather uninspired performance by Boals. It is like he recorded it on a misty Monday morning.

Add to that that the total production of the album could have done with some more salt and pepper and the outcome is that ‘Nocturnal’ is a decent album with excellent guitar work and some outstanding vocals and some good tracks but also with some bumps along the way. And that guitar intro of the instrumental title track…. I believe Taylor (who once recorded a version of Blackfoot’s ,,Highway Song’’ on one of his albums) was inspired by that song again.