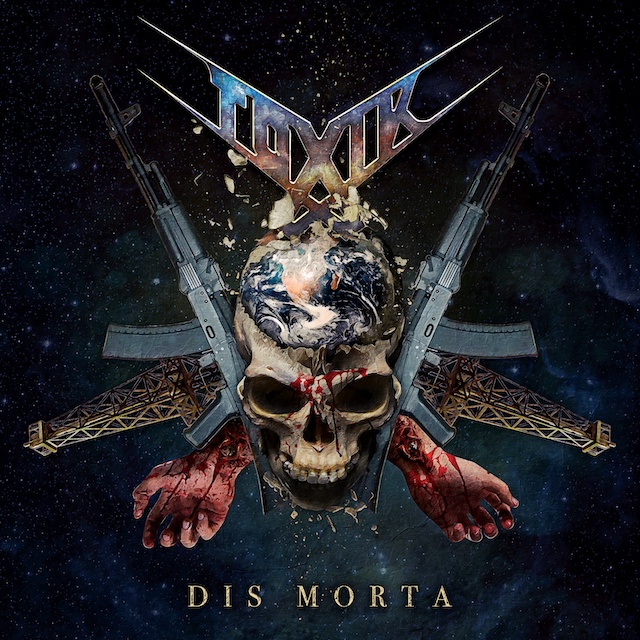 `Dis Morta’ the new album of Toxik is not one for the faint hearted, both musically and lyrically. With Josh Christian’s diligence as writer, he displays a document rooted deep in modern day society, fusing faith and believe with scare tactics laid down by governments and rulers; “Right to this day. Indebted we pay. For the living they said we must earn”. Accurately depicting the state of the world, as he foretold many obstacles of urging greed and mind control on the band’s 1990 release `Think This’, `Dis Morta’ leaps forward with social critical lyrics and narratives, embedded in the most technical speed and thrash cocktail one can imagine. On all accounts `Dis Morta’ aims higher and shoots further than any of the band’s releases and introduces the listener to the next level of progressive techno thrash.

`Dis Morta’ is the heart-starting espresso of the album, introducing the biblical narrative drawn from Deuteronomy 2:31, with the Lord saying to deliver Sihon and his lands to the Israelites after being refused the right to pass. Leaving no survivors is what Christian and his men do on the following brutal attack unleashing their blistering ponderous opening on the listener. A fury barred execution of screaming guitars and ferocious drum turmoil leading into the riff propelled creeping monster. Iglesias pitching it up and a bedazzling number of notes is fired at the fan when they start thrashing it up heavily. Ponderous double kicked drums keep the snowball rolling cleansing towards big mosh pits.

Ron Iglesias proves to be the vocal wonder of the world, able to pitch extremely high while delving deep in anger-laden and rip-roaring extravagance. Typical is the sudden harsh implemented melody opening to the rousing chants punching fists before the song dies out with a guitar fraction of string plucking and serene airy chords recreating the opening of the `Think This’ title track. It is just a small step for mankind but a giant leap for humanity when the band unleashes their most technical guitar accolades recorded to date.

With ,,Feeding Frenzy” Toxik diminishes 90% of their genre companions in drive and technicality. Surprisingly it also links (much to my perception) to `Think This’ with the outcalls in the chorus reminiscent to the calls (“watch it, believe it, receive it”, etc) An omni-present linking perhaps of Christian Clairvoyant offering from the 90s perhaps, but it is disturbing how both storylines and dystopic views collide ‘in the now’. How well words are picked proves the frenzy of this spectacle. Impressive riffs are holding it together with piercing high-pitched solo spots. Intensifying when drawn towards the impeccable twin section, Christian duels with Eric van Druten, while James DeMaria (drums) and Shane Boulos (bass) keep the insane pace high and relentless, laying down a rock solid and equally powerful foundation.

In between all this musical extravagance it is Ron Iglesias who keeps belting out the right notes, energetic and dynamic. There’s so much going on in mind-boggling speed that the song is over before it started. Another sound file kicks off the daunting ,,The Radical”. Unloading monstrous riffs onto a break packed stop ‘n go motion the song is severely dynamic with Iglesias in fire catching fury. He adds the right amount of anger and action to the intense track, cementing the ranges of Mike Sanders’ `World Circus’ rawness with Charles Sabin’s `Think This’ higher versatility. Morphing into the tone of song he flexes his voice around literally every shift in gear, anger or despair. Astounding how well he matches profile and adds lyrical content.

AN EXECUTION OF RIFFS

With Josh as main writer he found a twisted equivalent in Ron, conveying the Toxik message and statements. It opens to an array of opportunities with the band delving deep. Insane is the execution of riffs. Severely technical with arpeggios accumulating while maintaining a comfortable and melodic signature. Going against the grain of feelings constantly, both guitarists unload an intensity not displayed often. Exploding into the onslaught of complex riffs and arpeggios ,,Power” thunders in. Tons of arpeggios are fired upon us in the solo, but the overwhelming fretboard wizardry is constant. A bombardment of double bass drums and low mowing bass keep inflating the pace. Iglesias’ screaming vocals perfectly fuse to the speed metal tempo of the rhythm section. Doubling up in galloping pace towards the outro, the song tends to explode.

,,Hyper Reality” again enters with a conceptual sound file focusing on before slowly shooting into gear. Stagnant at times with an intense amount of unpredictable time changes and odd signatures it transcends as a mind-boggling techno-thrash magnum opus. Comfortable melodies Baudrillard’s theories of simulacra created hyper reality taking over everyday lives and thinking, with inevitable results of televised personalities seeming more real than life itself. The comfort casted musically interchanges with legato fusion parts and soloing that suddenly fall into ultra-complex sections of drums and rhythm patterns scattering discomfort.

In all this musical turmoil Iglesias is the leading bullet holding up the song’s intensity with his wide range, isolated within the all the musical extravagance. Easily moving back and forth in registers he displays immense agility and spot on feelings matching the song’s unpredictable structures. ,,Hyper Reality” certainly adds the fuel to the fire and might well be the epitome track of the band and the techno-thrash genre in general!

Tapping a different vein, ,,Creating the Abyss” is pulled forward by dynamic drums and a low-end technical bass revealing Boulos’ skills and craft. Hyper energetic, contradicting with the overall slower pace and melodic mayhem. Vocally a lot is going on with vocal interaction and rousing shouts falling to the harsh outcall of the song tittle. Thrashing it up midway and falling to acoustic subtlety which morphs to its notes packed ending, displaying fascinating skills elevating notes with shred magnitude on fusion toning. It paves the road for the short and furious ,,Straight Razor” with intricate riffs and guitar effects deepening the atmosphere. It is one giant cacophony of pondering moshpit-evoking drums and tons of riffs. The song strays from previous versions as featured on the `Wasteland’ demo and `Metal Massacre IX’ album.

Redeveloping the song and emphasizing the current dynamics of the band, it underlines the band’s jaw dropping growth and thrive. Perfectly breaking in pace, ,,Chasing Mercury” fuses darker mid paced gloom sections with pitch perfect melodies and nesting hooks, broken down by odd time signatures and harsh tempo swings. Weeping jazz notes and fusion elements with star studded guitar and bass interaction display the bands unmatched abilities as creators. The ‘Padre Nuestra’ (our father) implemented midway underneath all the dabbling instrumental section adds to the serious content and pretentions of the song. The interplay of bass and guitars is versatile and almost multi-dimensional.

Standout is the piano opened ,,Devil in the Mirror”. Almost preaching his parish, Iglesias taps an emotional vein empowering the lyrical content. His vocal abilities furthermore emphasized, the song suddenly reveals its real face when it comes barging in. Mega melodic chorus and memorable breaks distracting from the song’s core of packed intense riffing and scattering speed and thrash. Tempo changes frequently and there’s an epic (blues) toned section that harshly is interrupted by an insane guitar duel and intricate soloing. Christian has the upper hand and unleashing a shred solo drawing from his widest range. Going all in with jazz and fusion elements glued into the core spine of prog shreds and neoclassical signatures, he displays his agility and mathematic technical execution underlining his status as guitar player. It’s a myriad of rolling arpeggios utilizing high octaves in neoclassical enchanting fashion.

Reverting the song to its original form it explodes with melodies, to let ,,Judas” waver in with a metal Pantera-ish riff disrupted by thrash mayhem doubling down on the song’s lyrics. Ron’s comfort casting vocals soon morph agitated reverbing “Told you so…”, and having him switch between narrative singing and outcries of despair and agony. He belts an impossible job on this album closer with all of the band anteing up to a juggernaut of riff and solo frenzy with astounding interplay of bass and guitars. Most admirable is DeMaria’s combusting double bass drums and polyrhythms implied. Loaded with dynamic percussion it becomes the backbone of the vigorous high-octane track. Going out with a bang, `Dis Morta’ rules the sonic soundscapes of techno thrash and put it on infinite spin just to grasp the melodic and progressive extravaganza and lyrical message.

Looking back on Toxik’s back catalogue it becomes inevitable to draw the conclusion it was carefully building towards this techno thrash masterpiece. With `World Circus’ introducing their technical thrash in the whirlwind of bay area thrash and speed metal in the late eighties, the band unleashed their conceptual pretentions with `Think This’. Introducing the adjective of techno-prog and a social critical (lyrical) catch on society and technology, the band implemented more sophistic turns and twists. An all-encompassing disorder of classic song structures held up around surreal odd time changes and melodic hard riffing, fused with intricate melodies, it enrols with towering coherence. Its year-to-year growth and grip on the listener is tremendous, with the newer music cementing the band’s allure in the new era. Their reunion came to form with ,,Breaking Glass”, strongly rooted in the present, fusing elements from the band’s catalogue.

Now `Dis Morta’ is the step up. Disruptive in emotions, strongly leaning on the whirl of its lyrical concept, the album is an exclamation of the band’s (and Christian in particular) intensity and drive, resetting the beacons for the (extinct) genre and resuscitating it while immediately raising the bar. `Dis Morta’ is their masterpiece and the cover says it all: it blows your mind – the world revealed!