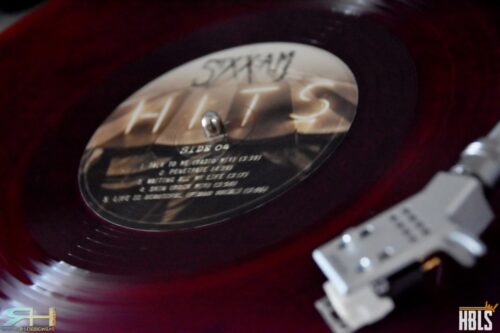 It took a bit longer than normal, but once again I’d like to share some nice VINYL releases that got my attention.

I’d like to start with the second release of Silent_Skie_s, the project of Tom S. Englund (Evergrey) and pianist Vikram Shankar. The people who are familiar with my VINYL corner blog know that I was absolutely blown away by the first release ’Satellites’ [Episode 6]. Not only by the beautiful enchanting, intimate and daring arrangements of the songs, but also by the looks of the album release. Everything locked in with that release. So, you can imagine my expectations for this new record were high and I was definitely looking forward to the release of ‘Nectar. It has also become a double album and the artwork, layout and design, by Swedish tattoo artist Marcus Körling, absolutely fits the music.

I especially like the cover artwork of the drawn flower with the pollen. In the inside of the gatefold cover we find the song lyrics on the left side (a bit small for my eyes) and on the right the credits and a few more drawings (sketches) of a person falling and a heart.

The back of the cover shows us the song titles plus another drawing with the same two little angels, that are contrasting from each other, to fit the Yin Yang style.

The inner sleeves are plain black and the labels on the records have 4 different images from the cover artwork and the song titles from the record side.
As far as the music on this album is concerned, I can actually be very brief. Compared to the first album, Englund and Shankar haven’t changed much in their formula. Except for the fact that a cello has now been used, played by Raphael Weinroth-Browne. The overall atmosphere seems to be a bit darker. I think that they have managed to create a nice successor to ‘Satellites’ with ‘Nectar’, which will also appeal to fans of the first album. However, do not expect even a shred of metal on this album, because then you will be disappointed, as this is absolutely not a metal project.

However, that is the case on Evergrey‘s ‘Live: Before The Aftermath’. In 2020, after much deliberation, Evergrey decided to stream a concert live from their hometown Gothenburg. This event resulted in almost two hours of pristine live material and is now officially released. This album gives a nice overview of what Evergrey has managed to achieve as a band in 27 years. A ‘best of’ live album, with an excellent sound quality. As far as the artwork is concerned, however, there could have been more in it for the fans. The front cover contains images of the individual band members in a live setting. A beautifully put together collage.

On the back a band photo at the end of a concert and the titles of the songs. And that was about it when it comes to the artwork. Unfortunately, because the inner sleeves are plain black and the labels on the records are in two variations. One live shot and the other with just the band name. There are no credits to be found on the release who has made the artwork or photographs. In fact no credits at all. A bit on the sober side but on the other hand, the recordings and the music on the albums are amazing. That is of course the reason people buy a music record.

This triple live album is the final release on AFM Records, as they have moved on to Napalm Records for their new upcoming albums.

The next release I’d like to shed a light on is the release of Grinder Blues’ ‘El Dos’. This band is formed around King’s X bassist and singer dUg Pinnick. But do not expect progressive metal in the style of that band, since we are dealing with a hardcore BLUESROCK trio here. Nothing more, nothing less. However, at a very high level! If you’re a fan of the blues rock genre, you’ll lick your fingers with this one.

This is the second release of the band and the follow up to 2014’s ’Grinder Blues’. In terms of style, the gentlemen have changed little in their concept. As far as the artwork is concerned, I can only conclude that I’m not a fan of the hat-wearing dog on the cover. Created by Chantal Hamm. On the back we find a band photo taken by Rory Doyle and the song titles.

The inner sleeve has the texts divided over the two sides and the credits. Also, 2 live images made by Christoph Huber adorn the inner sleeve. The same dog as on the cover can be found on the record labels.

The second AFM Records release of this blog is the VINYL release of Serious Black’s ‘Vengeance Is Mine’. As I already reviewed this album I will only look at the artwork and design side of this release. The beautifully illustrated artwork on the cover was created by Stan-W. Decker from www.stanwdartworks.com.

The back is mainly black and has a picture of a crown in the middle. Furthermore, of course we find the song titles. On the inside of the gatefold cover, we find the similar image on the left that also can be found on the cover.

On the right we find the lyrics, pictures of the band members [taken by Thomas Friedl] and the credits. Here too, a very small font has been chosen that really could have been a bit bigger. The inner sleeve is plain black. The record labels contain the band logo on one side and the crown of the back cover on the other side. My version of the record is the violet VINYL.

The last album I want to focus on in this episode is the compilation ‘Hits’ by Sixx: A.M.
This album is currently only out on CD in Europe and the VINYL version will be out sometime in June of this year. However, I already managed to get my hands on the US copy that was released in February.
Sixx: A.M. initially started out in 2007 as a side project from Mötley Crüe bassist Nikki Sixx, to do a one-off soundtrack album to coincide with the release of his autobiography ‘The Heroin Diaries: A Year In The Life Of A Shattered Rockstar’. The album was so successful that the band decided to carry on and make five more albums. ‘The Heroin Diaries Soundtrack’ (2007), ‘This Is Gonna Hurt’ (2011), ‘Modern Vintage‘ (2014), ‘Prayers For The Damned‘ (2016) and ‘Prayers For The Blessed’ (2016), as well as three EPs: ‘X-Mas In Hell‘ (2008), ‘Live Is Beautiful‘ (2008) and ‘7‘ (2011).

This album features fourteen tracks from their back catalogue, four brand new songs and two reworked versions of past recordings.
If you are not familiar with the music of Sixx: A.M. then ‘Hits‘ is a great introduction to their music  [14 songs].

About the new tracks, let’s start with ,,The First 21”. A slow/ mid tempo song, that does not really match the high quality of the songs on the rest of the album. Not bad, but also a song that does not stick to me either. “Talk To Me” is the second of the new tracks, that is a notch better than the first one, but also this one does not reach the high standard of the hits section. If I had to rate it, it would be a 6 out of ten.

The best of the new tracks is clearly ,,Penetrate”. This is also the heaviest of the new songs, with a ripping riff and killer chorus as we know from Sixx: A.M.. I love the guitar parts of DJ Ashba and especially the solo part. This is a song that reflects the band standards and an earworm indeed. ,,Waiting All My Life” is the last of the four new tracks. This one also rocks your socks off [in a ,,Pray For Me” way] and has a catchy chorus, but the real highlight is DJ’s guitar solo.

The reworked rock version of ,,Skin” is nicely done, but cannot match the original. That version was so pure and touched the soul deeply, both musically as lyrically, it is unbeatable. However, the piano version of album closing track ,,Life Is Beautiful” is mesmerizing, with an absolute top performance by singer James Michael.

And now to the artwork part. The cover art is done by Joe Lalich [www.joelalich.com] and Kevin Capizzi. The front cover has an embossed Sixx: A.M. logo and shows the greatest hits circus tent. While the back cover zooms out a little further to the tent artwork, with various signs with fraises from the song titles. It also captures the titles of the albums.
The inside of the gatefold cover shows us fraises of the song lyrics on the left side and all the credit work on the right side of the sleeve. There is also a band image taken by Dustin Jack and Amelia Van Brunt.

The album comes with a card for the digital download version and a small flyer to give the new “The First 21” book of Nikki some attention and the albums of Sixx: A.M. The inner sleeves have all the lyrics printed and again some excerpts of song lyrics.

The VINYL is red with a dash of black in it and the labels on the records contain the tent the band logo and the song titles.
I love it and if you also love VINYL this is a must have Sixx: A.M. release. Sadly it’s probably the last we’ll hear from this band.