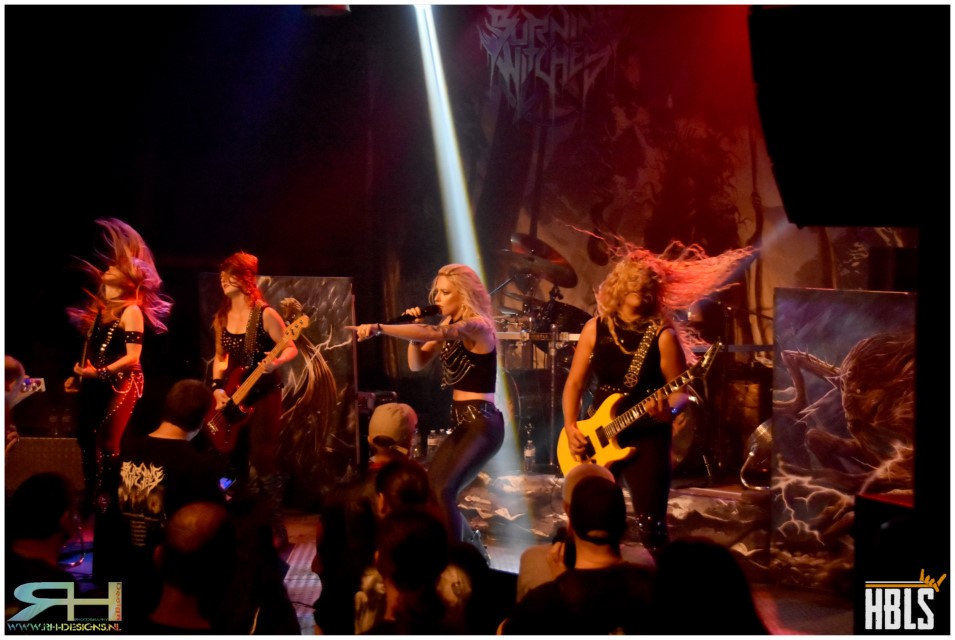 Under the banner “Double Metal Tour 2022”, the ladies of Burning Witches and Nervosa spent a few months on the road together for a 40-date European tour. The gig at the Rockfabrik was initially scheduled for an earlier date but was moved to August 19th.
So I was finally able to go to the Rockfabrik last Friday, for an evening of Thrash and Heavy metal. Whether it’s because of the new date I don’t know, but it struck me that the number of visitors today [unfortunately for the ladies] were not that high. It this didn’t stop the bands from putting on a great show and give it their all. In any case, the fans who were there did not have to search long for the perfect spot to be able to follow the shows properly.

Tonight the international [Brazil, Spain, Greece and Italy] outfit of Nervosa kicked off and I have to say they did it with verve. Singer Diva Satanica [who joined the band in 2020] knows how to impress with her convincing grunts and stage presence. In fact, I think many male grunters could learn quite a bit from this lady. It’s unbelievable what sounds she knows to create from her slim body.

The rest of the band also knows how to keep up the pace in a convincing way. Drummer Eleni Nota, bassist Mia Wallace and guitarist Prika Amaral are having a good time. You can clearly hear this band already has a big tour under their belts, as their playing is super tight.

During the 60-minutes set they mainly play songs from the latest album ‘Perpetual Chaos’ (2021), like ,,Genocidal Command’’, ,,Kings of Domination’’, ,,Rebel Soul’’ and ,,Venomous’’, but also earlier work such like ,,Into Moshpit’’ and ,,Kill the Silence’’ pass the setlist. And yes, despite the small number of visitors, there was a moshpit.

After a short break it was time for the Swiss fireworks of Burning Witches with Dutch singer Laura Guldemond. Just like the ladies of Nervosa, they rock the joint.
After the intro ,,Winter’s Wrath’’ the band kicks off with ,,Executed’’ from ‘Hexenhammer’ (2018), followed by ,,Wings Of Steel’’ and ,,Sea Of Lies’’ from ‘Dance With The Devil’ (2020). Born in the Netherlands, Laura addresses the German audience in a mixture of her best German and English. Which is certainly appreciated. Unfortunately she also suffers from a nasty cold, but under the motto ‘the show must go on’ she makes the best of it.

With ,,Flight Of The Valkyries’’ and ,,We Stand As One’’ we can enjoy a few songs from their latest album ‘The Witch Of The North’ (2021). Led by guitarist and founder Romana Kalkuhl, the witches manage to get the audience firmly under their spell. And of course guitarist Larissa Ernst, bassist Jeanine Grob and drummer Lala Frischknecht are also responsible for this beautiful show.

After ,,Lucid Nightmare’’ and title tracks ,,The Witch Of The North’’ and ,,Hexenhammer’’, the band manages to close the convincing set with ,,Black Widow’’ and ‘encore’ ,,Burning Witches’’ from their 2017 debut album ‘Burning Witches’.

After the show, the band members of both bands were in the hall to sign autographs and take pictures with their fans. Kudos to both bands!! And thanks for a great evening of powerful music.

All Photos by Raymond Helebrand