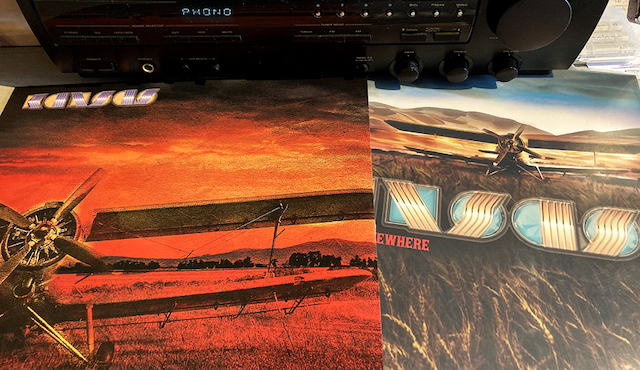 It went under the radar for many fans of prog rock in 2000. `Somewhere To Elsewhere’ was Kansas’ finest hour since the eighties, seeing a reunion with former and founding member Kerry Livgren. It would also be Steve Walsh’ last studio album for the band and it was the last record to feature the late Robby Steinhardt. A milestone album in more ways than the obvious, now finally reissued by Magna Carta on CD and for the very first time on vinyl.

`Somewhere To Elsewhere’ displays the band in fine form. With Livgren at the helm as producer and sole songwriter, Kansas transfers into the symphonic beast of past. Without losing the modern twist and approach, all songs ooze the typical and classical Kansas grandeur. Well-crafted front to back, great eye for detail, the songs well with their profound emotion. Each and every track has music crafted around its lyrics, carrying your feeling into the sonic spectre created around its lyrical content.

,,Icarus II” is the exclamation point in epical proportions. Telling the story of a flying fortress heading out on their mission over Nazi occupied Europe, the song touches with all inner feelings. You are transferred into the sonic dimension by the piano opening and building tension. Its drum and key interaction take you point for lift off into the bright blue skies. Slightly glorious with warm melody and Steinhardt’s signature violin. Dreams and hope pass by in a darker mood following, with the teller craving the embrace of his empty bed where he is safe. Questioning about his fears and that of the enemy, the song blooms in timid stance before hitting the chorus.

You feel part of the mission, aligning with the narrative and the person telling his story. “Now we’re cruising above the horizon, never knowing if we will return…” tenses as the serene setting before you dive head first into a turbulent battle. Ehart’s snare fires rounds like the gunners with blistering precision. There’s dizzying turbulence of crashing air fights. Walsh returns to fire up the emotional section with a harsh riff underneath and cacophonic keys scattering. “Flak, bursting all around. Friends going down in flames”, Walsh belts out in sheer agony. Turmoil, disarray.

Musically you feel the density and tension before we go into the part where the bomber is hit. Serenity and glorious return to form, the song wells with emotions as the pilot demands crew to abandon ship and try to reach home with them being safe. ,,I’m going home” …. You almost see the homeland appear on the sunset horizon, while you’re flying home the shot-up bomber. Robby’s signature violin briefly adds the heartfelt frail note of glory.

The glorious welling emotional coaster is just the opening to the album and links directly to the band’s initial ,,Icarus – Born on Wings of Steele” from their `Masque’ album. This is as epic and cinematic a song can get, in my opinion. Followed by the riff driving and heavy loaded ,,When the World Was Young” and ,,Grand Fun Alley”, Kansas explores modern touches with the first rocking out hard and the second hitting the funky blues notes. Steinhardt belting out a rougher vocal line fitting the mood.

Slick and very proggie it evolves, leading us to the wonderful inspiring ,,The Coming Dawn (Thanatopsis)” emphasizing Livgren’s craftmanship carving sheer brilliant cinematic songs with its sweeping majestic flavor, sung into glory by Walsh who shines on the album. Recording all of his vocal tracks in solitude at his home studio while recording his solo album `Glossolalia’, he puts a mark on the lyrics and content. “When my world starts to fade. I can only hope that every choice I made. Will endure, and carry on … into the coming dawn”.

Switching emotions and impacting deep on this awesome track, and many more on this album, like ,,Myriad” with its awing violin and guitar interaction, loaded with melodies and hooks. The dominance of keys is intense as displayed on ,,Look at the Time”, with its Beatles vibe and Zep’s ,,Kashmir” viola eluding in exquisite Broadway appeal full of nesting melodies and haunting omni present keyboards and riffs.

Richard Williams is dominating the sonic spectre without taking the spotlight. He yields towards the bigger sonic picture and plays a demanding role in the musical strut and stride. Great harmonies with his colleagues, isolated subdued riffs, and tremendous melody unloaded with singing emotional soloing.

Taking the blues-scale to inject a heavier contemporary rock stride on ,,Disappearing Skin Tight Blues”, he grinds back and forth with loads of reverb adding to the hard hitting (yet subtle) beat of Ehart. With Robby bearing a heavier grunt, he is the perfect singer for this, but it is Walsh’ high harmonies on the chorus deepening the songs style. “I’m going shed this skin and disappear” … It is the magic Livgren and his Kansas are so praised for, blending styles into their unique benchmark style.

The profound sound reverting to on the epic progressive ,,Distant Vision”, with its piano driven sections and welling string arrangements. Glorious and timid, powerful yet frail. The song has great time changes and progressive symphonic styled parts holding up the bodywork of the flourishing track. Signature sticky harmonies with no less than 9 melodies blended, a towering beautiful chorus with Steve belting his impressive vocals, and impressive genius piano and violin sections, the song evolves with exceptional variation. The benchmark Kansas cocktail flourishes again in the impeccable cinematic ,,Byzantium”.

Middle Eastern themes hold it up and alluring Gregorian chants add to the lush atmosphere that breaks when the band hits ,,Not Man Big” with its rocking swagger. Unloading intense battles with strings answering guitars diving into and insane slowdown. The dynamics pick up again to conclude with Ehart’s end groove and incredibly offbeat snare strokes resonating along its heavy grind. Long spun, it slowly fades out and after about a minute of silence the odd ‘hidden track’ returns. An unexpected feature, non-essential, even though Kerry himself sings ,,Geodesic Dome”.

`Somewhere to Elsewhere’ is an essential Kansas record finally released on heavy vinyl fitting the era marking the return of the format. The full bombast of the band bashes from your speakers with great depth. More vibrant, denser, it fills your home.

Magna Carta Records did an exemplary job rendering the artwork. The HDR feeling adds to the experience of the sonic journey presented on the album. It is darker and more ominous but glorious with the plane bathing in sunlight. Completely new front cover, by the way.

The 2 LP gatefold is slick and the inner sleeves are also embellished with colorful inner sleeves featuring lyrics and band photos. The 2LP record comes as a deep red (transparent) version while the reworked CD also features the new art.