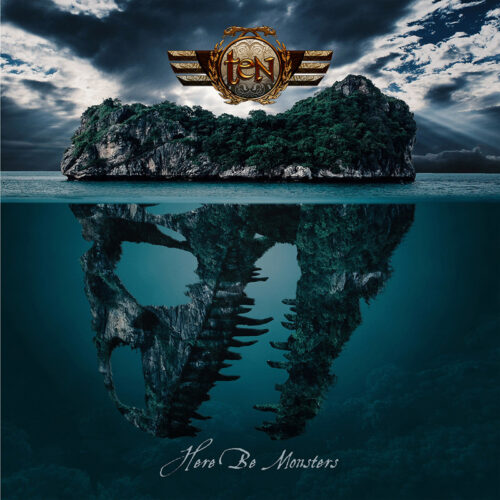 February 5, 2022 by Michel van de Moosdijk - More about our team

Creative as ever Ten vocalist/producer Gary Hughes has not been wasting his time. In the last year he worked as producer for the British female fronted rock band TAO, he released a double compilation album of his solo-material and he has been working on two new Ten albums of which ‘Here Be Monsters’ is the first one to be released while a second one will follow later in 2022.

It is not so that ‘Here Be Monsters’ and the yet untitled album to come are connected via a concept or something like that. We are talking about two albums that stand on their own, which might be the main reason that they are not released simultaneously. Listening to ‘Here Be Monsters’ it is once again clear that Ten have found their style. The album sounds sophisticated, smooth and silky and has songs that are not extremely catchy at first hearing. Not strange if you are familiar with the 26-year history of Ten, you have to grow into the material.

The band has always chosen for songs that need some time to settle and that are most of the time are no short-term affairs. Still, the shortest song on this album, ,,Hurricane’’ (4.30 minutes) is for me the best. I can’t really explain why, it is more based on a feeling, I guess.

Although the band has no less than three guitarists it must be said that ‘Here Be Monsters’ is not per se a guitar-orientated album. Sure, there is plenty of guitar work and some of the solos are really tasty and (in some cases even) breath taking but the keys of Darrel Tree-Birch also have a prominent role, forming the AOR/symphonic rock character of the album together with the soulful voice of Gary Hughes himself, who as usual produced the album being assisted by Dennis Ward (Magnum) who looked after the mix and mastering. ‘Here Be Monsters’ might not explore unknown musical territory but is of good solid UK stock with trademark singing by a man whose voice always manages to impress me, even after so many years in the business. This time is no different.